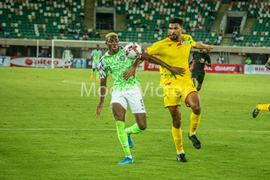 Sport
June 5, 2020June 8, 2020 Stan 0 Comments
LinkedInFacebookTweetPin
LiveChat will greatly increase the number of your satisfied customers. I've already tried it and I can recommend it as a go-to customer service tool! Sign up today for a free trial!

Lille owner Gerard Lopez has confirmed that the club have received
offers from unnamed English and Spanish clubs for Nigerian striker
Victor Osimhen.

The future of the Super
Eagles number nine has been the subject of speculation in recent weeks
following an outstanding debut season in France that saw his score 18
goals in all competitions.

Tottenham
Hotspur, Chelsea, Manchester United, Arsenal and Liverpool have been
mentioned as possible destinations; Barcelona, Real Madrid and Sevilla
are the Spanish clubs credited with an interest, while Napoli, Inter
Milan and AC Milan are among Osimhen’s Italian suitors.

“There are multiple offers. We turned down one English and one Spanish offer this January transfer window,” Lopez told the Daily Mail UK.

“There
is a wide array [this summer] and I wouldn’t want to give the names of
the clubs who are bidding but what I can tell you is that there are
multiple [offers].

“There are three championships that have clubs that have bid for him.”

Though
Lopez has repeatedly stated that Osimhen is not for sale, it is
believed that he would be willing to part company with his top scorer if
an astronomical offer is made, similar to the fee they received from
Arsenal for Nicolas Pepe last summer.

Lopez
added : “I am not being a sales guy because last year people didn’t
believe that we had the offers we had with [Nicolas] Pepe and it turns
out we had multiple of them,’ he said.”Let me tell you with
Osimhen, it is the same thing, whatever number you heard, the high
number I have read is very much on the money of the offers that we have
received. That’s where we are”.

Osimhen has four years remaining on his contract with Lille, whom he joined from Sporting Charleroi in August 2019.