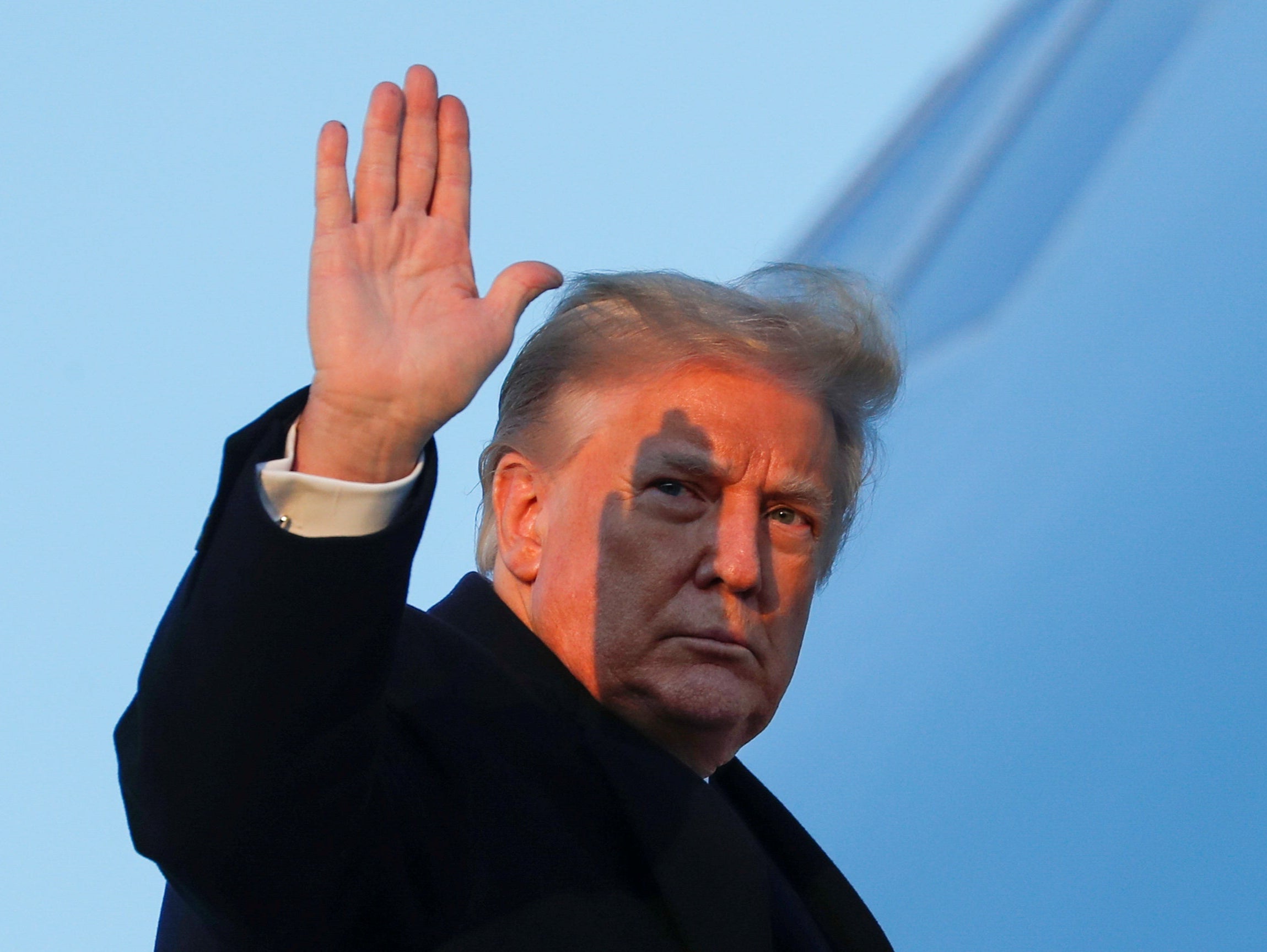 President Donald Trump is reportedly back playing golf as Republican anger continues to grow over his refusal to sign off on a $900bn Covid relief package.

It comes just hours after unemployment benefits for millions of Americans struggling to make ends meet during the pandemic expired, plunging the livelihoods of people across the country into further uncertainty.

Mr Trump has been roundly condemned for refusing to green-light the package, which took a bitterly divided Congress months to agree.

And much of the discontent is coming from those within the president’s own party. Maryland governor, Larry Hogan, and Pennsylvania senator, Pat Toomey, are just two GOP lawmakers calling on the president to release the vital funds.

But Mr Trump is demanding that direct payments to Americans are increased from $600 to $2,000. He called for “increased payments to the people”, urging his colleagues to “get rid of the ‘pork’” from the legislation, which he has criticised for paying out aid to foreign countries.

Sunday’s round of golf is the second in a matter of days. Mr Trump spent Christmas Day on the fairways with South Carolina’s Republican Senator, Lindsey Graham.

The president devoted some of his post-Christmas Day holiday to pushing yet more baseless claims about voter fraud at the election — a clear sign that he has no intention of throwing in the towel as the New Year approaches.

“The proof is irrefutable!” he said as he called on Senate Republicans to back his efforts to overturn the election result.  “Massive late-night mail-in ballot drops in swing states, stuffing the ballot boxes (on video), double voters, dead voters.”

But his baseless voter fraud claims have lost support from his once-favourite news network, Fox News.

Fox News correspondent-at-large Geraldo Rivera launched a withering attack on the defeated president. “Sadly he lost a bitterly contested election,” Rivera tweeted. “However since he has behaved like an entitled frat boy.”

The fate of the bipartisan package remains in limbo today as the president continues to demand largerrelief checks and complained about “pork” spending. Without the widespread funding provided by the massive measure, a government shutdown would occur when money runs out at 12:10am on Tuesday.

“It’s a chess game and we are pawns,” said Lanetris Haines, a self-employed single mother of three in South Bend, Indiana, who stood to lose her $129 weekly jobless benefit unless Mr Trump signed the package into law or succeeded in his improbable quest for changes.

Washington has been reeling since Trump turned on the deal after it had won sweeping approval in both houses of Congress and after the White House had assured Republican leaders that Trump would support it.

Instead, he scoffed at the bill’s plan to provide $600  relief checks to most Americans — insisting it should be $2,000. House Republicans swiftly rejected that idea during a rare Christmas Eve session. But Trump has not been swayed in spite of the nation being in the grip of a pandemic.

“I simply want to get our great people $2000, rather than the measly $600 that is now in the bill,” Trump tweeted Saturday from Palm Beach, Florida, where he is spending the holiday. “Also, stop the billions of dollars in ‘pork.”‘

Mr Rivera had been a loyal supporter of Mr Trump throughout his four years in office, but that backing appears to have come to an end.

“For almost 4 years I’ve supported @realDonaldTrump who was assailed by leftist creeps who conjured the Russia Hoax to wreck his presidency,” he wrote on Twitter.

“Nevertheless he prevailed. Sadly he lost a bitterly contested election. Shit happens. However since he has behaved like an entitled frat boy”.

“Sidney Powell is a pathetic lawyer who among others is working to destroy the legacy of @realDonaldTrump,” he said.

Mr Trump continues to insist that the election was “rigged” and that Mr Biden “stole” the win from him. He and his legal team are yet to provide any evidence to back up those allegations.

Despite the electoral college meeting earlier this month to confirm Mr Biden’s election victory, a small but determined group of Trump loyalists in the House of Representatives is refusing to accept the result.

But any move by Trump allies to overturn Mr Biden’s win would require support in the Senate, where it has so far been lacking. The president last night issued a rallying cry to GOP lawmakers who take their seats in the upper chamber.

“Time for Republican Senators to step up and fight for the Presidency, like the Democrats would do if they had actually won,” he said. “The proof is irrefutable! Massive late night mail-in ballot drops in swing states, stuffing the ballot boxes (on video), double voters, dead voters”.

Mr Brooks last week claimed that support for Mr Trump’s bid to subvert democracy was “growing” in the Senate, adding that “multiple” lawmakers are now rowing in behind the defeated incumbent.

He did not name any, however. John Thune, a Republican senator for South Dakota senator, disputed Mr Brooks’s claims, saying the effort is “going down like a shot dog.”

Mr Kinzinger, representative for Illinois’s 16th congressional district, is one of those GOP lawmakers in the House refusing to humour the president and his false claim that he won the election.

He branded the president’s attempts to overturn the election result a “scam” designed to “raise money and gain followers.” James Crump has the full report below:

ICYMI: Trump finds time to complain that Melania has not been featured on enough magazine covers, despite mounting crises

Despite the impending deadline on the Covid relief bill, a potential looming government shutdown, and the ongoing surge in coronavirus cases, Donald Trump still found time to lash out at fashion and lifestyle magazines.

Their crime? Not featuring first lady Melania Trump on their covers during the administration’s four years in office. Oliver O’Connell has the story:

Some reaction to Trump’s refusal to sign off on Covid stimulus package:

“It is the day after Christmas, and millions of families don’t know if they’ll be able to make ends meet because of President Donald Trump’s refusal to sign an economic relief bill approved by Congress with an overwhelming and bipartisan majority.” — President-elect, Joe Biden

“After spending some time with President @realDonaldTrump today, I am convinced he is more determined than ever to increase stimulus payments to $2000 per person and challenge Section 230 big tech liability protection.” — South Carolina senator, Lindsey Graham

“The reason it blindsided everybody is because they thought the President was involved when it was obvious he was sleeping on the job when it came to these negotiations. That’s what happens when you get too wrapped up in an election you already lost.” — Denver Riggleman, Republican representative for Virginia’s 5th congressional district.

Joe Biden has appointed Steve Ricchetti as “couselor to the president” – Mr Ricchetti was Mr Biden’s campaign chairman, and, in the White House, was the vice president’s chief of staff.

Mr Ricchetti’s brother Jeff was reported on Sunday to have secured a contract to lobby for Amazon.

On 13 November, just a week after the election was called for Mr Biden, Jeff Ricchetti signed the deal to lobby for Amazon Web Services, the cloud platform of Amazon and a subsidiary of the tech giant.

Steve Ricchetti may have to recuse himself from any issue that touches on his brother’s lobbying.

Elise Jordan, who worked as a speechwriter for former secretary of state, Condoleezza Rice, said the GOP lawmakers supporting the president’s bid to overturn the election result are disrespecting the country.

Speaking to MSNBC earlier this week, she added: “Maybe some of us in this world are lucky enough to have friends that will sit around and coddle and comfort us when we are being completely delusional and unhinged and downright playing in fantasy fairyland.

“Those are the kind of friends willing to play that game with Donald Trump right now.”

Despite the president losing the 3 November poll, a small but determined group of his allies in the House of Representatives are planning to challenge Joe Biden’s election victory on 6 January when Congress meets to confirm it.

And Jordan believes those pressing ahead with the plans are undermining faith in America’s political system.

She added: “If they want to go play their version of political Candyland, they can do that and they can continue to coddle and help encourage Donald Trump’s delusion, but it really is, frankly, so unhealthy for American democracy right now.

Republican governor urges Trump to sign off on Covid package

Maryland governor Larry Hogan is urging Donald Trump to sign off on the Covid relief package.

Mr Hogan said the president should pass the bill and then push for increased direct payments to Americans.

Speaking to CNN earlier today, Mr Hogan said: “We’d like to see more help get out to the struggling small businesses, the people who are unemployed and need this money desperately.

“But this took a long time, eight months of divisiveness in Congress. We need to get it done…Sign the bill, get it done, and then if the president wants to push for more, let’s get that done too.”

The president has said he will not green-light the package until lawmakers increase direct payments from $600 to $2,000.

Trump will be remembered for “chaos and misery” if Covid relief not signed off, says Republican senator

President Donald Trump will be remembered for “chaos and misery” if he does not sign off on the Covid relief package, Republican senator Pat Toomey has said.

“You don’t get everything you want, even if you’re president of the United States,” Mr Toomey told Fox News on Sunday.

“I understand the president would like to send bigger checks to everybody …I think what he ought to do is sign this bill and then make the case”.

He added: “[h]e’ll be remembered for chaos and misery and erratic behavior if he allows this to expire.”