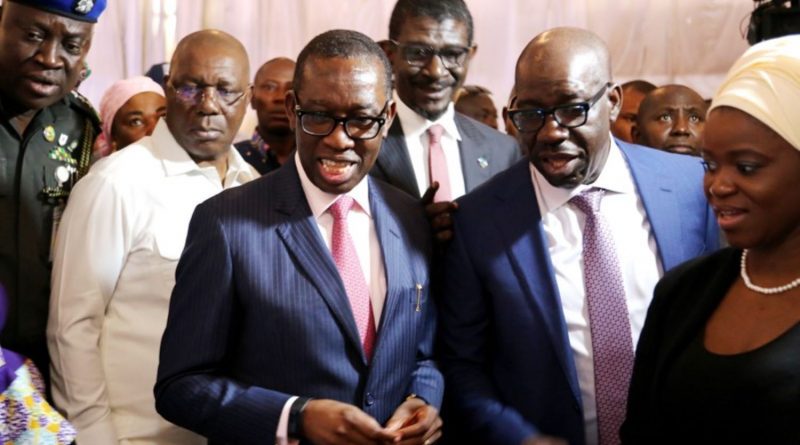 … the invention of the electric motor, a threat to Nigeria’s economy- Okowa

MANAGING Director of Nigerian Export-Import, NEXIM Bank, Mr Abubakar Bello, yesterday said the bank has earmarked N1 billion to promote the production and value addition of exportable commodities in every state of the federation.

Speaking at the 3-Day NEXIM Bank, South-South Enlightenment and Engagement Forum in Asaba with the theme; “Maximizing Non-Oil Export Potentials in the South-South Region for Economic Growth”, Bello said the South-South was the economic hub of the country, urging south investors to key into the fund.

Saying that the South-South was rich in crude oil deposit and has been the main sustenance of the nation’s economy, the NEXIM bank boss, said the Niger Delta region was rich in agriculture and deposit of over 45 solid minerals outside oil which has remained untapped.

He insisted that the country’s economy would do better if the region and indeed other parts of the country could look inward and tap the mineral deposits in their domain.

Bello said the essence of the enlightenment and engagement with the people was to reawaken their consciousness on the need for them to look beyond oil and to get feedback from existing exporters on the experiences with a view to getting them to know the opportunities available to them through NEXIM Bank.

He said: “NEXIM Bank created this platform for engagement and useful exchange of views amongst exporters, bankers, policymakers, service providers and other stakeholders in the non-oil export sector.

“In spite of being blessed with the enormous agriculture, solid minerals and indeed human resources, Nigeria has remained a mono-product economy with oil and gas sector accounting for about 70 per cent of government revenue and 95 per cent of export revenues.

“This has continued to expose the Nigerian economy to the vagaries of the global oil market.
Having released the limitation, President Muhammadu Bihari, launched the Economic Recovery and Growth Plan (ERGP) with key objective of diversifying the economy and promoting sustainable growth and development.

“To support this programme, the NEXIM Bank also launched the State Export Development Programme and earmarked at least N1 billion to promote the production and value addition of exportable commodities in every state of the federation”.

According to him, the ongoing enlightenment and engagement programme was expected to provide an avenue for NEXIM Bank to promote existing partnership and develop new ones towards enhancing enriching the access of Nigerian exporters to its intervention funds.

Bello said, “exporters and prospective exporters, particularly operators of the Small and Medium Scale sector will benefit from the capacity building and networking opportunities”.

The host Governor, Dr Ifeanyi Okowa in his opening remarks, said: “As with the national economy, the economies of these States have been largely dependent on the oil and gas sector. Evidently, this distorted mono-product economy does not bode well for inclusive economic growth and sustainable development.

“Oil is a depleting resource and, even more importantly, the advent of electric cars is a clear and present danger to the future of this industry. Hence, the urgent need for the Governments in the Niger Delta region to expeditiously diversify the economy and maximise our non-oil export potentials for accelerated economic development.

“To achieve this, it is exigent that we first take full advantage of our unique location. In business, it is axiomatic that being in the right location is critical for success. Our natural location in the coastal region puts us in a prime position to engage in export-import trade. Take Delta State, for instance. It has four seaports in Warri, Burutu, Sapele and Koko, which combined capacity exceeds that of all the other ports in Nigeria put together.

“You can, therefore, imagine the quantum of trade and commerce, as well as the limitless possibilities that exist for investment and employment opportunities when just two of the ports are fully functional.

“While the Federal Government has commenced the dredging of Escravos Bar for this purpose, the Delta State Government is taking steps to bring the Burutu Port back to life. Located in Burutu Local Government, it was the first modern port in Nigeria and served as the hub for the movement of goods to and from Nigeria as well as distribution through the inland waterways to and from the hinterland of the North, Central and Eastern parts of the country.

“As a result, it was a strategic port of importance to the Nigerian economy during the colonial era until its abandonment and eventual sale in 2006 to Akewa Colmar Terminal Limited. Our administration is now forging a strategic partnership with the company to develop the Port.