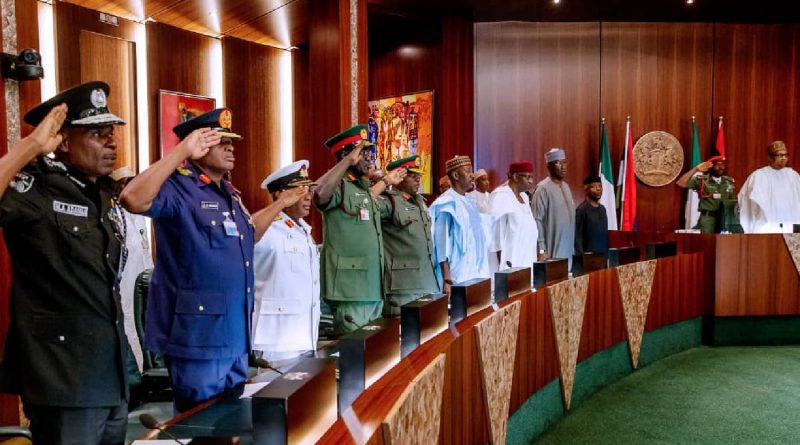 A Northern group under the aegis of Arewa Professional Forum, APF, has expressed concern over what it called the worsening state of insecurity in the country, saying it was time for President Muhammadu Buhari to allow the service chiefs quit the centre stage of the nation’s security management.

The APF said the service chiefs have exhausted energies, ideas and capacities insisting that they can no longer turn around the country’s security for better.

The group, in a statement it issued after its third annual meeting in Kaduna, tasked the president to see reason with a majority of Nigerians who are of the view that the nation’s top security heads be relinquished of their positions and fresh hands and ideas injected for positive results in the security maintenance.

In the statement signed by its National Coordinator, Dr Ibrahim Nasir, the group reminded the president that in democracy, the voice of the majority prevails, saying the recent resolution of both chambers of the National Assembly that he replaces the services chiefs, was the view of the majority of Nigerians given that the parliament is a representation of the people.

The organization while insisting that the president listens to what it called “the voice of the people” by reorganizing the security architecture of the country, said:”The time has come when the entire country expects new ideas, philosophy and method in the fight against insurgency in the country.”

“We strongly believe that time has come for our president to bring in fresh hope and clear directions on how best the country will strategize to overcome the present insecurity situation in the country.

“Our president was elected by Nigerians and the same Nigerians have spoken through their representatives in the National Assembly. Our president should listen to them by dropping the service chiefs, who have since reached retirement age in the military and appoint new ones with fresh ideas to do the job for which we elected him to do,” the statement added.

Noting that the “president’s idea about insecurity has proved inadequate to deal with the threat to our lives and property”, the APF charged him to “urgently change tactics and personnel in order to win the war against rising threats to the lives of Nigerians.”

According to the northern group,“From what we have seen so far, our president has not been able to solve the security problem staring the nation in its face and should seek new hands to help him do the job.”

The statement charged the president to “immediately look for their replacement in younger, well experienced and trained officers to lift the country out of the woods.”

The group which said it was compelled to come out of its shelve to speak on the situation, regretted that in spite of the attention being given the security sector by the president in terms of funding, the development had not yielded the desired results, saying ” we can’t keep applying the same tactics and strategy when they are not working. ”

According to APF,” allowing the service chiefs to continue in their positions given the worsening security problems in the country was not in the best interest of anyone.

Although, the group hailed the service chiefs for what it called their “great contributions so far in fighting insecurity in the country” it nevertheless insisted that fresh hands were needed to tackle the problems.

“There is no denying the fact that the service chiefs have tried their best to restore security in the country since their assumption of office, but given the dimension in which insecurity has assumed in the country, we feel that its high time fresh ideas and hands were injected”, it said, adding that “nobody is an island in any area of responsibility.”

Noting also that the service chiefs were being “unnecessarily retained despite that they have since reached their retirement stages”, the group said, “the only way to get fresh ideas is to remove the incumbent service chiefs to give room for younger officers to grow.”

The group said Nigeria must do away with what it called “unproductive tenure elongation in areas where fresh ideas are needed”, adding that,”We know the way the military organisations operate.”

The statement read further: “While we commend the service chiefs for their services to their motherland so far, we appealed to our dear president to immediately sack them because they are already in their retirement years. Besides, the president’s action by keeping them has been interpreted in some areas as being for partisan needs.”

“Their continued stay in office no doubt is gradually weakening the morale in the armed forces as some officers’ careers are being stagnated.”

“Our position is borne out of our genuine love for our country. We have seen that the unabated situation is threatening our cooperate existence and food security.

“Our dear president needs to listen to this solemn call that is on the lips of every Nigerian because we are truly fade up with the unabated lost of lives and property on a daily basis.

“The current service chiefs have obviously exhausted all their ideals and have nothing left to offer.

“Our region is the most unsafe place to be in Africa today because of insecurity. Investors can not come, businesses are packing up and moving out of the country due to insecurity. What have the service chiefs done specially to deserve five years and still counting?

“We wonder why Mr president has refused to let them go against popular opinion. The entire country is bleeding and Mr president must act now to avert major food crisis in future because farmers have since abandoned their farms for fear of Kidnap and attacks.”