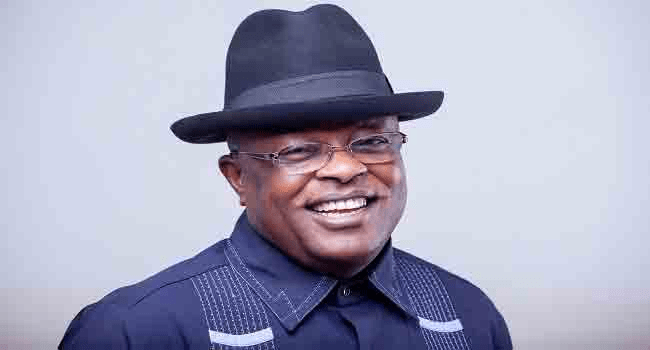 The newest APC Governor, Engr David Umahi of Ebonyi State on Thursday officially join the ruling All progressive Congress (APC) but before the ceremony which took place at the Christen Ecumenical Center, Abakaliki he on Tuesday, 17th November gave his reasons for resigning from his former party, PDP. He said southeast has suffered ill-treatment in the hands of PDP which he could no longer endure but believed that his journey will teach PDP a lesson. This and more are what Governor Umahi said while interacting with journalists in Abakaliki. Our correspondent Nkechinyere Oginyi was there to capture it.

Many leaders of the APC in the state have been commending you for joining the party. Do you think they are really happy with your defection and will not fight you?

Asking me whether the people I am coming to will like me is just like you are married; at the beginning its all about love but along the line, your wife begins to see reasons not to like certain things you do and I know one of those things you do that she doesn’t like but I will not tell anybody here and don’t ever think about people that like you or don’t like you, it’s part of the job, it goes with the job and if you are looking for everybody to be loyal to you, you will not get to your destination because God allows all these things, he allowed Judas Iscariot to be stealing money so that the word of God will be fulfilled. Everybody has got a destiny and no destiny is straightforward, there are obstacles on the way and God allowed those obstacles so that you will know that he is God.

So, I am not looking for who will like me or who will not like me. I am looking for the prosperity and progress of this state and if there is something that I have achieved, I have achieved the fact that for the first time there is a  political gathering which has never happened in the affairs of this state, it is a plus and I don’t know whether it will ever happen where APC and PDP who came together and they forgave their differences and then decided to forge ahead.  Moreover, I am not vying for anything, so you will be fighting the air if you don’t like me and you are fighting me. I will bless everybody who wants to contest for anything in this state, that will be my role as a father and I have said and I will continue to say it that it is a waste of time for any Governor that wants to replace himself because I have to tell you which one ever worked.

People are saying you were promised some positions in the APC and that it was why you agreed to join the party. What is your take on this?

At a time, the five states were all PDP and one of the founding members of PDP is from the southeast, the late Vice President, His Excellency, Dr.Alex Ekwueme. And so, it is absurd that from 1998 going to 2023, the southeast will never be considered to run for Presidency under the ticket of PDP, this is absurd. And this is my position and will continue to be my position.

Let it be known that I’m God’s project and I do not go beyond my calling. I am satisfied being a governor and by the grace of God, for 8years. First and foremost, as a businessman, I then took an adventure in politics; I refused to be called a politician because politics is all about lying, cheating, and backstabbing. That is not my family character and so, I protest and nothing will stop me
from this protest.

I believe that this movement will cause PDP to understand that no man is an Island and no single person can be called a coward. Together we are stronger and if people are shouting in this country of fairness, equity, and justice and I stand in a place where such is not practiced then I have to re-examine my head.

People can write all they want to write, it is not my business. In 2023, if God permits, I may be quitting politics, and I will be very satisfied because the miracles in Ebonyi state may just be the reason I was born in the first place and I will be bold, like Apostle Paul that says; “I have fought a good fight, I have finished the race.” Wait unto children and their generation, a crown of success because I believed that the foundation would have been laid for the greatness of this state, Ebonyi and so, everybody runs his destiny.

There is this speculation that you left PDP because the party refused to zone its 2023 Presidential ticket to you, how do you feel about it?

Let me first clarify that I never sought for PDP presidential ticket and so, whosoever is saying that I moved to APC because they refused to zone the ticket to me is being very mischievous because even if PDP promises an individual a presidential ticket; how does it work when over 8000 delegates will be electing the person and such promise cannot happen with ten or twenty people. So, people are being very mischievous about that but they are a lot of prominent people from South East, I don’t want to list them but I think the House of Assembly members in their letter to PDP listed very much more qualified personalities from the southeast that can take the Presidential slot of PDP.

One of the things people are saying is that you joined APC long ago and that is why you never spoke against President Muhammadu Buhari and the party.

One thing I promise is that I will never castigate PDP, just like, in PDP, my only sin is that I refuse to castigate Mr. President. Until thy kingdom come, I will not do that because that is not my family character but those who don’t have character were very suspicious of me because I don’t castigate President and they thought I could be leaking information about PDP. What nonsense is that?

I came from a very well known family; a place where there is character. If you want to deal with a man, you have to find out about the family background. People jump into politics and covering their character.

Let it be known to all that nobody promised me anything. Let it be known to all that I move because of injustice, and I have no regret about that. Some people say, you will regret this movement and I laugh at them, they talk as if they saw God as if they are my God. I am satisfied being a businessman, I am satisfied doing my businesses and that’s all.

For one to leave his political party to another, there should have been a crisis. Is there a crisis in PDP?

You are the one to answer the question that if a Governor wants to leave his party to another party, there should be a crisis in that political party. If you ask that question, you should be investigative in your journalism to know if there is anything said about the constitution of the electoral act that defines ways by which a Governor can leave the office.

There is this fear that your movement to APC will possibly lead to the total collapse of PDP in the southeast, what is your opinion on this?

In most times and difficult times, it takes only one person to be a martyr and it takes only one person to be the crusade. I offered to be sacrificed in this direction, I am sacrificed in the sense that whether it is good or bad, I have to lead this protest, don’t need to consult anybody. I don’t want PDP to collapse in the southeast but PDP can collapse itself in the southeast if they don’t heed the people’s advice on the platform of justice and equity. But if they heed people’s advice, my movement may not have much effect on that. So, let them heed to advise on the platform of justice and equity first, and let me continue to say that it doesn’t matter the party, without justice in this country can never t move forward in love, unity, and prosperity. We must have to gain the confidence of one another in this country, we just have to kill the suspicion in this country, we must have to begin to know that anywhere you are in this country, you are in your country Nigeria and that is the only way this country can move forward. It not about leadership, it’s about everybody and until everybody begins to preach this issue of patriotism, justice, equity, and fairness, our greatness will be a mirage. It’s not about the President or the Governors or the National Assembly, it’s about all of us.

Don’t you think it is too early to start agitating the zoning of the PDP presidential ticket to the southeast the way you are doing?

The State Executives of PDP did a letter to the National Working Committee NWC of PDP telling them the dangers of not zoning 2023 Presidential ticket to the southeast and one of the NWC members had said in Bauchi that the ticket is opened to every part of the country. Some people have also argued that it is too early to zone this ticket, the state  House of Assembly has also written to the National working committee (NWC) talking about the dangers of not zoning the 2023 Presidential ticket to the southeast.

Let me come to the issue that it is too early to start agitating the zoning of the PDP Presidential ticket to the southeast. In 2015, PDP had zoned the next Presidential slot against 2019 and the executive statement that the ticket is opened to all and the overtures and the movement and lobbying and the plan not to return most members of the working committee are the indications that I do not have any business in the party.