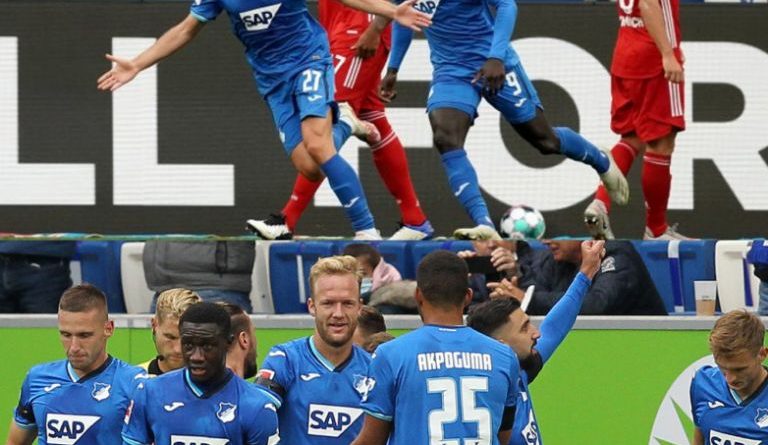 TSG Hoffenheim players and officials have been celebrating their outstanding feat of ending quadruple champions, FC Bayern Munich’s 32-match unbeaten run in all competitions with an emphatic 4-1 win in their 2020/2021 Bundesliga matchday-two clash at the PreZero Arena in Sinsheim, Baden-Wurttemberg, on Sunday, Completesports.com reports.

Sunday’s defeat to Hoffenheim was the first time Bayern lost a match since December 7, 2019, including a 21-game unbeaten run in the Bundesliga.

The Hoffenheim camp was thrown into wild celebration because they know that stopping Bayern’s rollercoaster is a feat reverberating across the world, and the club’s official website, Tsg-hoffenheim.de captured their reactions .

“We wanted to act very courageously and aggressively straight away,” Hoffenheim head coach Sebastian Hoeneß was quoted as saying by Tsg-hoffenheim.de.

“But we didn’t get in well. We then fought our way into it very well and are also 2-0 up. Unfortunately, the connection hit came out of nowhere. The team reacted incredibly to that. It was not easy. Hoeneß added: “We got behind the chain a lot and also made it 3-1 from a situation like that. We are incredibly happy today. It was a tremendous team effort. The win shows that we are on the right track. That we are leaders in the table doesn’t mean anything. We want to refine this success next week in Frankfurt.”

Croatia international, Andrej Kramaric, who currently tops the 2020/2021 Bundesliga scorers’ chart with five goals after his brace against Bayern, is thrilled to have played a pert in defeating ‘the best club in the world’.

The prolific Kramaric has now scored nine goals in three consecutive Bundesliga games. He netted four when Hoffenheim mauled Borussia Dortmund 4-0 in June to round off the 2019/2020 season. Then scored a hat-trick in the club’s first game of the new season against FC Cologne before his brace in the resounding 4-1 win against Bayern on Sunday.

Kramaric said: “It was a perfect game. That doesn’t happen often, beating the best team in the world. Bayern were certainly a little tired today, but we took the chance and prepared ourselves very well by training 100% all week.

“We are very happy about the great performance that we put in. Our coach adjusted us exactly right and we were totally focused on the game. We have shown that we can compete against the best in the world.” Hoffenheim goalkeeper, Oliver Baumann said of their famous win against Bayern: “We allowed very little, did very good counterattacks. We have a squad and a large community ß laid s fight. That’s why we won. I was certain that we would only win after the penalty to make it 4-1 in added time. You have to go through it for 90 minutes.

“It was a very good performance. We got into the game well from the start. A big compliment to the team. Of course, such a victory increases self-confidence. We are happy, but we also have to stay on the ground. That was also a victory for Peter Hofmann and his family today. I hope that Ermin is fine and that he has nothing bad. ”

Centre-back, Kevin Vogt, added : “We had a very good day. Both defensive and offensive. It was noted that Bayern had the 120 minutes on Thursday in their bones. But we also made good use of it. What was important to us was what the trainer gave us to change the rhythm every now and then. The art was to have to defend deeply, but not become passive, but still stay forward aggressively. It is a very, very beautiful day in the end. We weren’t afraid of the enemy. ”

TSG Hoffenheim Director of Football and the club’s former midfielder, Alexander Rosen, said: “That was a very strong performance by our team. We deservedly won 4: 1, even if you have to take into account that Bayern had to play 120 minutes in the Supercup in Budapest on Thursday and had the travel strains to do so.

“But above all, we have delivered an outstanding performance and were very smart and very determined in defense work, but also in playing with the ball. And we had a lot more chances, in the end we only scored four goals. Even if Bayern had a very difficult game, it’s up to our team to let the opposition feel the strain immediately. We did that from the first minute today.”