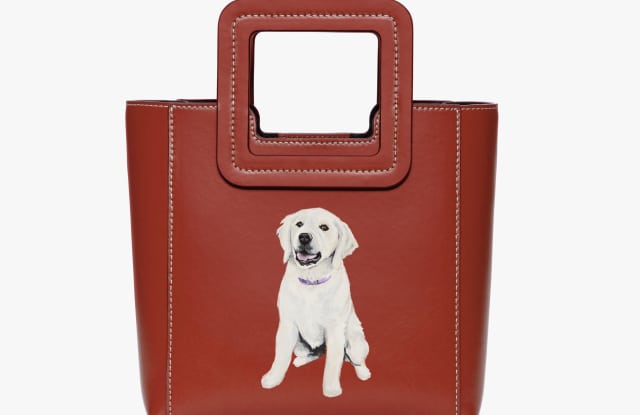 What to do when your handbag and dress business practically grinds to a halt during the early months of a global pandemic? As they say on “Portlandia,” “Put a bird on it!”

L.A. contemporary brand Staud’s pivot started with founders Sarah Staudinger and George Augusto asking themselves what was giving them comfort. They looked down at their furry friends at their feet — a Shorkipoo named Frank, a Yorkie named Flea, and a mutt named Carmela — and a lightbulb went off. In April, they started offering sweats custom embroidered with pet portraits, soon expanding the program to hand-painted portraits on their signature architectural bags.

“It’s really a piece of art, because who needs another purse right now?” Staudinger said during a recent brand catch-up. “It’s something you can have on your shelf that makes you smile. We have done chameleons and parakeets…our chief financial officer even got his chicken’s portrait.”

While the project, which donates a portion of proceeds to animal wellness charities, currently represents little more than 10 percent of the overall business, the brand has hopes to do more, and is expanding the offerings for fall.

“We bucked the downward trend with two big initiatives,” said president Jon Zeiders, who joined Staud in January 2019 from Burch Creative Capital, which has a minority investment in the influencer-loved brand. “We also launched New Balance in May. And we had our biggest quarter in the history of the brand in April/May/June on our e-commerce site and sales this quarter continue to be strong with the fall collection.” Staud unveils part two of its New Balance collaboration on Thursday.

“The New Balance collaboration opened up a new customer base, and it was great to see a different level of influencer,” said Zeiders, adding that fitness fiend Jennifer Lopez wore one of the workout looks. “It sold out in three days, and we had to get additional units. The launch timing was perfect, because it was when people were just figuring out they were going to be working out at home, and starting to buy new workout gear.”

Founded in Los Angeles in 2015 by creative director Staudinger and artistic director Augusto, Staud sells a vision of California living and Instagram cool that looks expensive, but is priced mostly in the $195 to $450 range. While the brand has always offered clothing and accessories, it gained early success with its bucket bags, first carried by Leandra Medine, Alexa Chung and other fashion girls.

“That put us on the map,” said Staudinger, noting that while accessories used to be 75 percent of sales, now they are a 50/50 split with clothing. “There is an easiness,” she said of the brand’s secret sauce, noting its roots in surf culture (reflected in the vivid hues and simple, sporty silhouettes), stoner culture (the occasional pot leaf decoration) and outdoor entertaining (tiered poplin dresses that pack an Instagram punch). “She wants to feel expensive,” Staudinger said of her value-led customer, who no longer just buys one luxury bag every year, but several lower-priced ones a season.

“Sarah never takes herself too seriously, which is why you see the pet portraits, or lemons hanging from a sweater,” said Zeiders. “She has a luxury point of view but has made it interesting, fun and novel.”

Even during the pandemic, Kendall Jenner and Emily Ratajkowski have been photographed out in L.A. wearing Staud’s dressy-casual, Nineties-minimal triangle halter tops, sateen jackets, jeans and croc-embossed kitten heel flip-flops. (Although the brand doesn’t pay for influencer play, it does have a robust gifting program.)

While Staudinger said the company continues to court influencers, the who depends on product. “It’s not street-style bloggers anymore — we were talking about Diane Keaton the other day, and we really wanted to get her a dog bag because she loves her dog. So it shifts depending on what the category is and who will love the product and wear it and do it justice.”

Like many brands navigating the retail contraction, Staud has had to amp up its web store d-to-c business, and is exploring adding more styling features to the site, as well as re-commerce. But the team remains committed to wholesale, too.

Although Staud has shown at New York Fashion Week, and was recently nominated for a CFDA Award, the brand has been showing via Zoom from L.A. — and liking it. “I don’t ever want to go back,” said Staudinger, who grew up in the Pacific Palisades. “I had all the samples here, the models were here, and the buyers loved it.”

“Even the carbon footprint of being a brand in L.A. and having to ship all those trunks,” said Augusto. “There may be a time when we need to go to New York, but everybody seemed happy and loved seeing the collection already on a web site, since that’s how much of it is eventually sold.”

“Sarah and George have created a collection that is perfect for the cool, chic, fashion girl who often shops daily and is always looking for something new yet not too trendy,” said Walker.

While they have scrapped plans to open their own brick-and-mortar store this year, the team is feeling optimistic about keeping the momentum going, and introducing more sustainable fabrications into the mix, including vegan leather jackets and recycled nylon dresses. (Meghan Markle wore one during her Africa trip last year).

“We used to talk about a three- to five-year plan, but now we’ve been working on three-month plans, and then we break that into two-week increments,” said Zeiders. “That’s how we’ve been getting through, by trying to talk to our customer and see how she is feeling now, because that can change in a minute.”