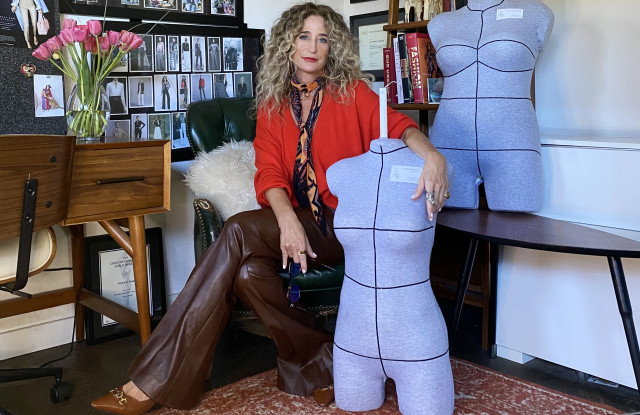 3-D scanned replicas of Jane Fonda and Lily Tomlin, outdoor wardrobe fittings and on-set social-distancing cops are just a few of the new norms for Hollywood costume designers, as TV productions begin to return in California and other states.

With new union-mandated health and safety guidelines, the entertainment industry’s behind-the-scenes style architects — much like fashion’s — are figuring out ways to adapt their up-close and personal craft to the new pandemic normal.

All the while, they are having to face broader creative challenges, including fewer background players to keep the number of people on set to a minimum, fewer costume changes, and more reliance on e-commerce for studio services as indoor malls remain shuttered, and other stores go out of business altogether.

“I almost had a full panic attack when I started to read the union protocols,” said Emmy-nominated “Grace and Frankie” costume designer Allyson Fanger, who is prepping to restart shooting the Netflix comedy on Oct. 1. “I’m going to have to ask for an additional PA [production assistant] to help with shipping, and another trailer, because of protocols of keeping everything separated. Anything anyone touches needs to be sanitized.”

To help ease the process during the pandemic, she enlisted Michigan-based DittoForm, a company that makes durable foam dress forms based on 3-D body scans, and had exact replicas made of the show’s stars: Jane Fonda, Lily Tomlin, June Diane Raphael and Brooklyn Decker.

“It’s not a 100 percent solution, and it’s not going to be the decision-maker, but it will cut time filtering out looks that won’t work,” Fanger said. “I can fit the clothes to the forms, and they can try things on in their personal space,” she said, explaining that standard dress forms have long been frustrating for designers trying to fit real people.

“Our primary customer has been home sewers, but there is a growing need for people who have clothes made for them to have a copy of their body,” said Carol Huls, DittoForm president and chief executive officer. “We’ve seen more interest in L.A. than we have in a while.” (Prices start at $1,500, the process takes about an hour with a technician using a handheld Styku or Artec Eva scanner on a subject wearing foundation garments, and the form can be completed within a few weeks.)

“I’ve also been working with a designer in Detroit who wants to scan his fit models,” she added of how the technology could be applied to the fashion industry during the pandemic.

“It was going to be five days of shooting, but we got it down to four and very little prep,” said Eyrich, adding that her workroom at Paramount Studios was rearranged to conform to CDC guidelines, with six feet in-between desks, and coordinated traffic flow in hallways.

“The actors flew in from New York, had a COVID-19 test, then quarantined. Then on Monday we all had a rapid test again to make sure no one got infected over the weekend,” she said, explaining how Netflix’s COVID-19 team mapped out the set with green, yellow and red zones, each requiring different levels of PPE for cast and crew.

“The fittings were really easy, you just have to wear PPE, be aware of distance, washing of hands and hand sanitizer.…We have a rack of clothes actors can put on themselves, and if I have to step in and zip it up, it’s a matter of seconds. Masks stayed on myself and the actor the whole time, and our tailor never had to step into the room but had full PPE in case. When you are having to start a show from scratch or do a collaboration with an actor on a new character for two to four hours, that will be trickier. But you just need a designated green zone to go out and breathe and come back.

“The thing that has changed a lot is the ability to use background actors,” Eyrich added of the lushly costumed extras who can really make a Ryan Murphy production, sartorially speaking. But she hopes the restrictions will ease once the health crisis does.

Over at ABC Studios, Emmy-nominated “Black-ish” costume designer Michelle Cole has been back on the lot a week, training to go back into production — whenever that is.

One implication of the pandemic may be that Johnson family has fewer looks next season. “Instead of eight changes for Tracey Ross, it might be two or three or four, because every costume change is a hair change and makeup change, and things take longer when you can have fewer people around you,” Cole said of the new rules.

It all takes some getting used to, said Emmy-winning costume designer Janie Bryant, who dipped her toe back into work earlier this month shooting an Allstate commercial.

“We had to wear face shields, gloves and protective gowns; there is hand sanitizer all over the place, and there’s a disinfecting team and social distancing cop. We ended up doing fittings outside, and then we’d send the actor into the trailer with the costume, specifically with directions of how to put it on.”

She and the other designers are eager to get out and support stores and costume rental houses, which are also trying to weather the economic storm, but it’s more challenging than it used to be. Appointments have to be made in advance, and are limited to two hours. “You can’t just run and get something and come back. It has to be sprayed and quarantined itself,” Cole said.

Bottom line, everything takes a little longer, said Bryant: “How many years has it been in Hollywood where people have been demanding — and I can be that way, too! This is a repositioning of priorities and understanding of a situation. We have to work together and we can’t act like spoiled children. How about that! I think that’s better for humanity.”