While nearly every political candidate promises, to make changes, in an attempt, often to sway voters, to vote for him, what good does that do, unless/ until, the difference made, is quality change, for the better? Either for better, or worse, every elected official has some impact/ effect, on the overall state of our LIVES! How many times, have we witnessed/ observed, situations, when, the individuals, we elected/ selected, either, not live – up, to our hopes, and aspirations, or even close to our loftier expectations? Far too often, this behavior, of empty promises/ rhetoric, perpetuates ignoring the needed/ necessary, relevant, sustainable behavior, which would be the more responsible behavior, which the nation, planet, and citizens, need, and deserve! With that in mind, this article will attempt to, briefly, consider, examine, review, and discuss, using the mnemonic approach, what this means and represents, and why it matters.

1. Listen; learn; lessons; leading: Too often, it seems, elected individuals, refuse to listen to their stakeholders, unless, they perceive that action, as serving their personal/ political agenda, and/ or, self – interest! We need to vote for people, willing to constantly learn and evolve, so life’s lessons, translate to quality, expertise, judgment, and, hopefully, useful wisdom! We no longer can afford, to elect populists, who make decisions, solely based on polls, and/ or, greed, but rather, select individuals, who, actually, proactively, are leading!

2. Integrity; issues; ideas; ideals; imagine; innovate; imagination: When was the last time, we felt, our leaders possessed genuine, absolute integrity, and were trustworthy? Focus on the relevant issues, and determine, which ones, align with the ideals of this nation! If they could imagine things, as they should be, and proceed, with pragmatic idealism, focused on viable solutions, perhaps, they would proceed with the level of imagination, and a willingness/ readiness, to innovate, as needed and necessary!

3. Visions; value; values; views: Before voting, the responsible voters, considers a candidate’s visions, aspirations, goals, priorities, and aspirations, and provide the correct balance of value, aligned with the nation’s values! Pay attention, and differentiate between, their rhetoric, and actual views!

4. Empathy; emphasis; environmental; endurance; excellence: It shouldn’t be about their self – interests, or goals, but, rather, we need to elect those, who proceed, with a high degree of genuine empathy, so they place their emphasis, and priority, where it benefits the nation, and citizens! We can no longer, accept those, who ignore the environmental needs, and relevant/ sustainable actions, or deny the realities of Climate Change! Leaders must possess the level of endurance, and willingness to provide the ultimate excellence, rather than settling for good – enough!

5. Solutions; service; sustainable; stronger: Instead of empty rhetoric and/ or denial, it’s time for sustainable solutions, to ensure, we become stronger and better! Demand better service, and accept no less!

It’s a reality, elected officials, for better or worse, affect our LIVES! Be a responsible American, and make the best possible decision, every time, you vote! 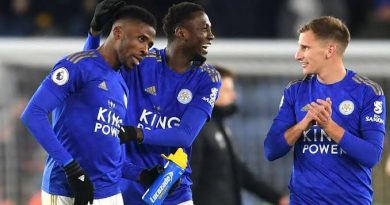 All Hail Kelechi Iheanacho After Striker Claims A Brace Of Assists