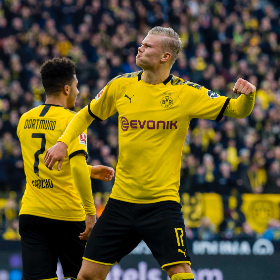 Following a stuttering start to the season and a change of manager, Bayern Munich have now returned to the top of the Bundesliga table.

This has led to a flux of money on them to go on and land the title again with punters using sign up offers on Nigerian betting sites.

One of them is 1XBET that is offering a 100% welcome bonus, which is providing popular to boost stakes for the success of the German champions.

A league that continues to be well followed by fans around the world, including in Africa.

Bayern Munich are 29 time winners of the top flight and have also won for the last seven years in succession.

The last side to topple them were Borussia Dortmund in the 2011/12 season.

This gives an indication as to why Bayern Munich started the current campaign as the overwhelming favourites, but they have a fight on their hands this season if they are to win it again.

Following the opening 20 matches played, they have picked up 42 points from a possible 60.

They have won 13 matches, drew three and lost four. This puts them clear at the top by just a point, but they also top the table when it comes to goal difference, having scored more goals than any other side on 58.

Next in the table are RB Leipzig who were top before their 2-2 draw against Monchengladbach.

They travel to take on Bayern Munich next, which is going to be one of the most important matches of the current Bundesliga season.

They have been very consistent this season, as they continue their remarkable rise to the top of German football.

They were only founded 10 years ago, so are looking for their first Bundesliga title victory in their short history.

Borussia Dortmund are also still in the title hunt and are just three points off the top of the table.

They have picked up 39 points, following winning 11 matches, drawing six and losing three.

Dortmund are another side to have been inconsistent this season but have been in strong form in recent weeks, largely down to their new signing Erling Braut Haaland.

Borussia Monchengladbach are the final side who are realistic challengers for the title.

They started the season in flying form and were in the top position, but have slowly dropped off.

They have been very strong in defence, so they will be hopeful they can continue this and climb back to the top of the table.