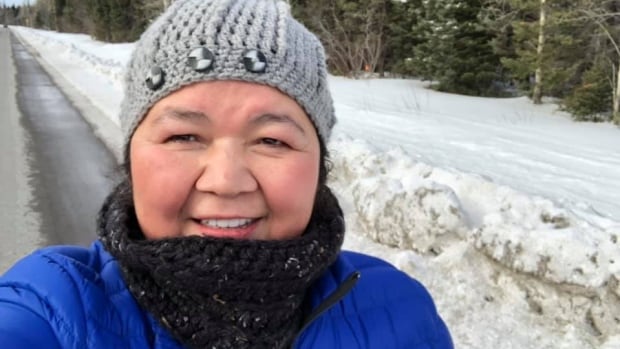 A lack of cultural sensitivity in the health-care system in Labrador isn’t new, according to Anastasia Qupee, social health director for Sheshatshiu Innu First Nation.

Qupee — who organized a vigil to honour Joyce Echaquan, a First Nations woman who recorded racist insults hurled at her from staff while she lay on her deathbed in a Quebec hospital — says Innu communities have for years been facing challenges in how they access health services.

Whether it’s the Innu-aimun language not being taken into account when seeing Innu patients, or incidents of racism that have happened at the Labrador Health Centre, she says health care needs to change.

“People when they feel devalued, they don’t feel healthy. It affects your heath. You don’t get better from it,” she said in a Labrador Morning interview.

Medical staff not listening to or understanding Innu patients is a common complaint that Qupee has heard in the community. She said that only contributes to a person’s feelings of not being valued, which in turn affects their health.

Qupee says there’s even a lack of respect when community members gather at the hospital when a loved one is placed in palliative care.

“We’re told you’re making too much noise or people should close the door when they’re singing or there’s too many people in the hallways. Like over the years, we always knew this is what we’re walking into at the hospital,” she said.

Qupee says a lack of cultural sensitivity contributes to an atmosphere where people are not only uncomfortable, but also fearful of the health-care system.

What’s in a name?

Nunatsiavut Deputy Health and Social Development Minister Michelle Kinney said a historical legacy needs to be recognized, as well as a systemic power imbalance that was laid as a foundation—  and it’s even found in the name of health authority, Labrador-Grenfell Health.

She says many people see Sir Wilfred Grenfell — the English medical missionary — as a pioneer who did much good in Labrador and northern Newfoundland, but she added he had a lot of control over health-care services.

Kinney sees there are gaps in education and training in health care. For patients with mental health and addictions issues, she said, the assumption often is that it’s the addiction bringing an Indigenous person to the hospital as opposed to a medical condition.

She also said the health-care system often defers to a social worker or an advocate accompanying a patient, rather than asking the patient themselves.

Labrador-Grenfell Health CEO Heather Brown said the authority, after hearing concerns from patients, Indigenous leaders and others, started work on making changes with community leaders. Both Qupee and Kinney are at the table.

Brown said the federal government partially funded a project for the health authority to work alongside with Nunatsiavut Government and Innu First Nation, and they were able to hire a project manager to move forward on education and training needs.

She admits it going to take some time, but the health authority is committed to improving the care it provides — and how it listens Indigenous people.

“We want to ensure that our staff are supported and understand, get cultural sensitivity training and awareness, but also [are] building relationships so that they feel comfortable and that they can provide care that meets the needs of individuals,” said Brown, adding some programs are already in place.

Brown said training will provide medical staff with a good understanding of culture when comes to making decisions with patients.

She said they’re also looking at new ways for people to talk about their experiences in the health-care system, which has already involved simplifying the complaints process.

Kinney said it’s important to recognize improving cultural sensitivity in health care is not brand new, as there have always been champions, as well as patients who do speak up.

What’s new is looking at it from a more systemic perspective, she said.

“We know the impacts of intergenerational trauma. We know about food security issues. We know all about the issues that probably bring Indigenous people to the health-care service more frequently than other users perhaps,” she said.

“That’s what we’re always striving for. All that we do is to make people feel that they are worthwhile, that they’re respected, and that they’re going to receive the best possible health care,” she said.

Qupee said it’s important for leaders to advocate on behalf of people in order to fix the problems they face in health care — not just on at Labrador-Grenfell Health policies, but with the College of Physicians and Surgeons of Newfoundland and Labrador, which regulates the medical profession.

Qupee says there needs to be more awareness about Indigenous cultures in Labrador more broadly, especially since Indigenous people access health services elsewhere in the province, too.

All that we do is to make people feel that they are worthwhile, that they’re respected, and that they’re going to receive the best possible health care.– Michelle Kinney

Medical residents need to know they’ll be doing cultural training when they come to Labrador to work, she said.

“I did some cultural sensitivity here with the residents. It was my first time. At the end of the session, one of them thought that we eat an animal which is from South Africa, and I was talking about caribou. To me, there’s a lot of work to be done,” she said.

She said she would also like to see an anti-racism group that former premier Dwight Ball created with Innu Nation move forward.

She says first-year residents of Memorial’s Northern Family Medicine program are getting cultural sensitivity training at the health centre in Happy Valley-Goose Bay.

Work is also underway on a palliative care room that will accommodate Indigenous families who gather at the hospital for a loved one in their last stages of life.

Some Labrador tents were also set up outside the long-term care facility this fall to provide space for residents to visit with their families.

Qupee says accommodating Indigenous people in their languages and cultural beliefs really sets the tone for how health care should be delivered.

“Everybody will be served to the best they can be. I want that there’s no fear,” she said.