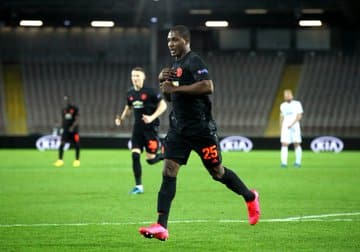 The word dream takes me back to ‘The Alchemist- a book written by Paulo Cohelo, which details the trials and travails of a young shepherd boy, that embarked on a journey to the Pyramids to achieve his dream or personal legend as it was called in the book.

On January 31 2020, Twitter Nigeria was filled with a lot of excitement and buzz after it was announced that Manchester United had signed Odion Ighalo on a loan deal.

Ighalo has always been the preacher of ‘favour over labour’, and the move to Old Trafford proved he was a favoured child.

The former Super Eagles star was not the first or second choice for Manchester United, who were looking to boost their attack following an injury to Marcus Rashford.

But with the Red Devils struggling to land their primary targets, they decided to bring in Ighalo on a loan deal from Shanghai Shenhua till the end of last season.

It was a move that surprised many but excited many Nigerians as Ighalo was the first player from the country to play for United.

Even Nigerians that are not Man Utd fans were happy for the ex-Super Eagles star as there was no bigger move than United. It has always been Ighalo’s dream to play for the Red Devils.

He was a die-hard fan of the club while growing up in the slums of Ajegunle. The former Watford striker looked up to the likes of Andy Cole and Dwight Yorke, who were fans favourites when Ighalo was still harbouring hopes of playing in Europe.

So to play in the ‘Theatre Of Dreams’ at the twilight of his career was indeed the stuff of dreams. But how has Ighalo’s dream turned out to be at United?

Ighalo’s first appearance came in United’s 2-0 win over Chelsea at the Stamford Bridge. It could’ve been an excellent debut for the Nigerian, but his strike after he was put through on goal was stopped by Wily Caballero’s legs.

Nonetheless, it was a confident start for the Nigerian, and it helped him settle in quickly. Ighalo’s first goal came on his fourth appearance for the club.

The 31-year-old scored United’s second in a 5-0 win over Club Brugge in the Europa League. He backed up that performance with a brace in the FA Cup fifth-round win over Derby.  Ighalo continued to prove his critics wrong as he scored once again in the Europa League win over LASK.

At that moment, Ighalo could not have been more proud with his start at United as it is more than what he had hoped for.

Even the critics were impressed by his start to life at the club. However, a dream that started fine, suddenly turned into a nightmare as all leagues were suspended for over three months due to the coronavirus pandemic.

During this time of inaction, there was uncertainty over Ighalo’s future at Old Trafford. The initial loan deal was to keep him at the club until the end of May.

But with the season set to be extended beyond May, it was not clear if Shanghai Shenhua-Ighalo’s parent clubs would be willing to allow him to continue his adventure in Manchester.

Due to his performances, the Red Devils were willing to offer Ighalo an extension, but Shanghai also want him back and were ready to offer him a new contract worth a whopping 400,000 pounds per week.

It left the Nigerian spoilt for choice or better put- an enviable dilemma. But after weeks of uncertainty, it was the Devils that won with Ighalo able to convince Shanghai in letting him live his dream at Old Trafford for another six months.

But was it the right decision?

“Sometimes money is not everything in life, playing at Man Utd has been my childhood dream, and it is not a decision I made just for no,” Ighalo told Brila FM.

“I chose Man Utd over a return to Shanghai for the future, and people will realise that I made the right decision when the time is right.

“Money is good, Money is very, very good, but Man United is my dream, I cannot jeopardise that dream because of money.

This was Ighalo’s reason on why he rejected the lucrative contract offered by Shanghai for an extended stay at Man Utd.

However, from the way things have turned out for him since he agreed to another loan extension, it looks like a wrong move.

While he would’ve been disappointed with the way Covid-19 interrupted his perfect start to life at the club, it would still have made sense for him to accept the 400,000 pounds offer from Shanghai.

Extending his loan was a bad idea. https://t.co/hJIGqfjJUs

It was his dream to play for Manchester United, and he has already lived that dream even if it was just for two months.

But like every other human being, Ighalo wanted more. He was not satisfied even though he already proved his doubters wrong.

He revealed it was his childhood dream to play for Manchester United, but at the moment he’s not even getting enough game time.

Before the coronavirus enforced break, Ighalo was overlooked for Premier League games, but he regularly featured in the Europa League and FA Cup.

However, following the resumption, Ighalo only made two starts under Solskjaer, and that came in the FA Cup quarter-final clash against Norwich and the dead rubber Europa League clash against LASK.

He scored the opener against the Canaries, but it was still not enough to convince the Norwegian to give him more playing time.

Since he arrived at the club, Ighalo has played 11 times but a total of 90 minutes in the Premier League. The Europa League and FA Cup used to be his tournament before COVID-19, but he was missing from the starting line-up in the quarter-final and semi-final, while he was also a late substitute in the FA Cup semi-final loss to Chelsea.

So far the decision to extend his deal at United has not turned out well for Ighalo as it has cost him playing time-not that he would care though.

But despite his lack of action in the concluding months of last season, Ighalo can still leave on a high. With games set to come thick and fast when the new season kicks off on September 12, Ighalo will get more opportunities to impress.

Nonetheless, irrespective of whatever happens in the last five months of his contract, Ighalo has realised the dream of a favoured child.