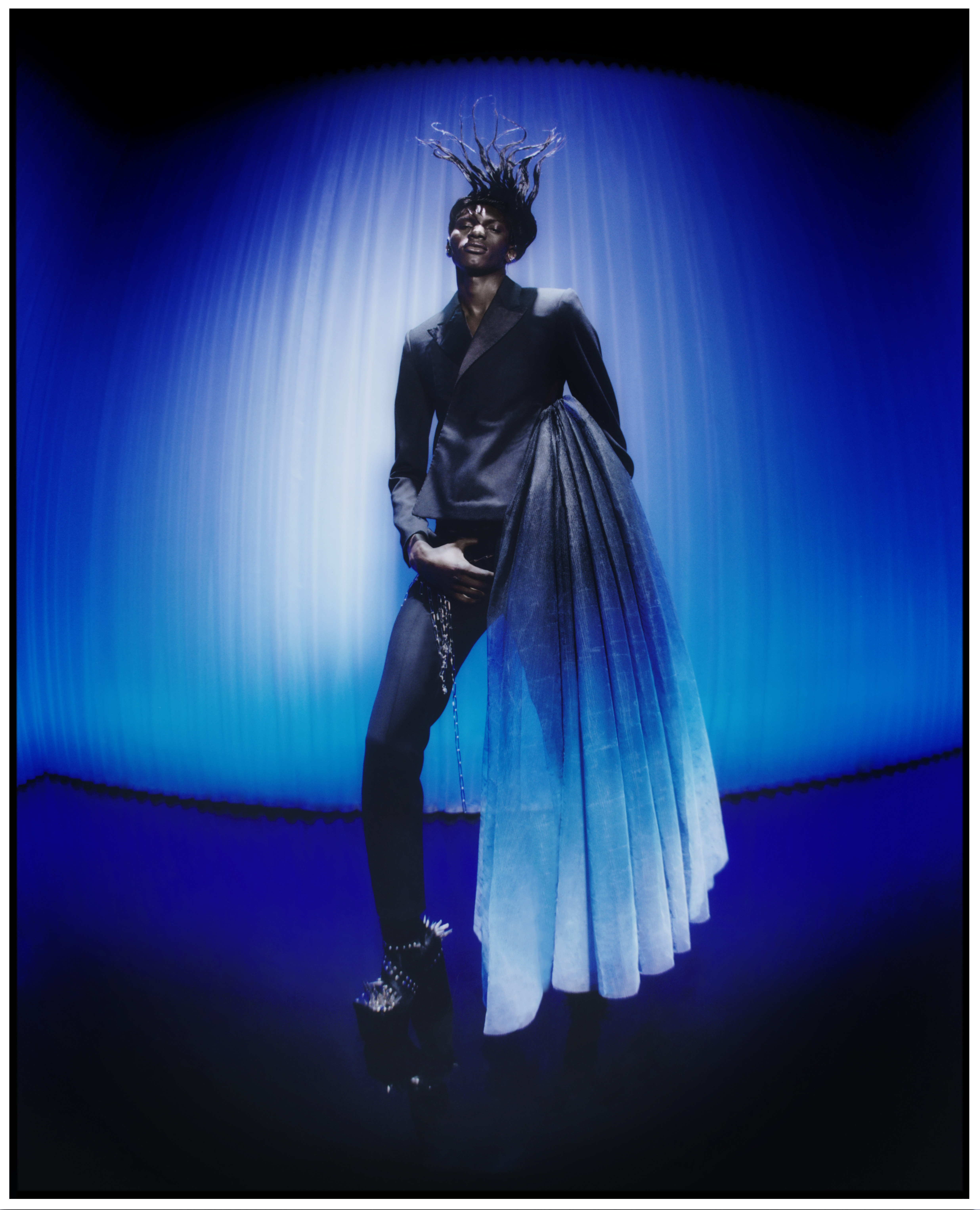 While still a student at Central Saint Martins, he caught the eye of Alessandro Michele, dressed Harry Styles and created capsules for Matchesfashion. In 2020, his star continued to shine against the odds: He might not have had the graduation he imagined last summer, but his graduate collection’s Instagram debut — which included digital-only looks and custom-made AR filters — had a global reach that no runway show could equal, and offered the industry a peek into what a fashion brand can look like now.

A few months later, Reed found himself designing a dress for Styles to wear for American Vogue’s first cover story featuring a man. Now he is unveiling his first collection post-graduation, and giving London Fashion Week a much-needed jolt of optimism and energy.

The collection is made up of six demi-couture looks that continue the conversation on fluidity and self-expression, in its most unapologetic, extreme form.

“We really need to push this narrative in society of what gender expression is, and what breaking the mold looks like,” Reed said in an interview. “I’ve been fascinated by this idea of punk and rebelling. We’re in lockdown right now, everything is closed, so even getting a button requires jumping through hoops. It’s really been breeding this sense of rebelling inside of me.”

Indeed, at a time of low morale across London — prolonged lockdowns and the aftermath of Brexit are taking a toll — Reed’s infectious energy, appetite for opulence and determination to spread the message of gender fluidity far and wide seems like the ultimate act of rebellion.

“I love this idea that the most creativity breeds though pressure and constraint. Diamonds form under pressure and this is my diamond exploding,” said the young designer, pointing to his over-the-top gowns and tailoring, which melded traditional men’s wear tailoring elements with over-the-top fishtails or spray-painted tulle panels. 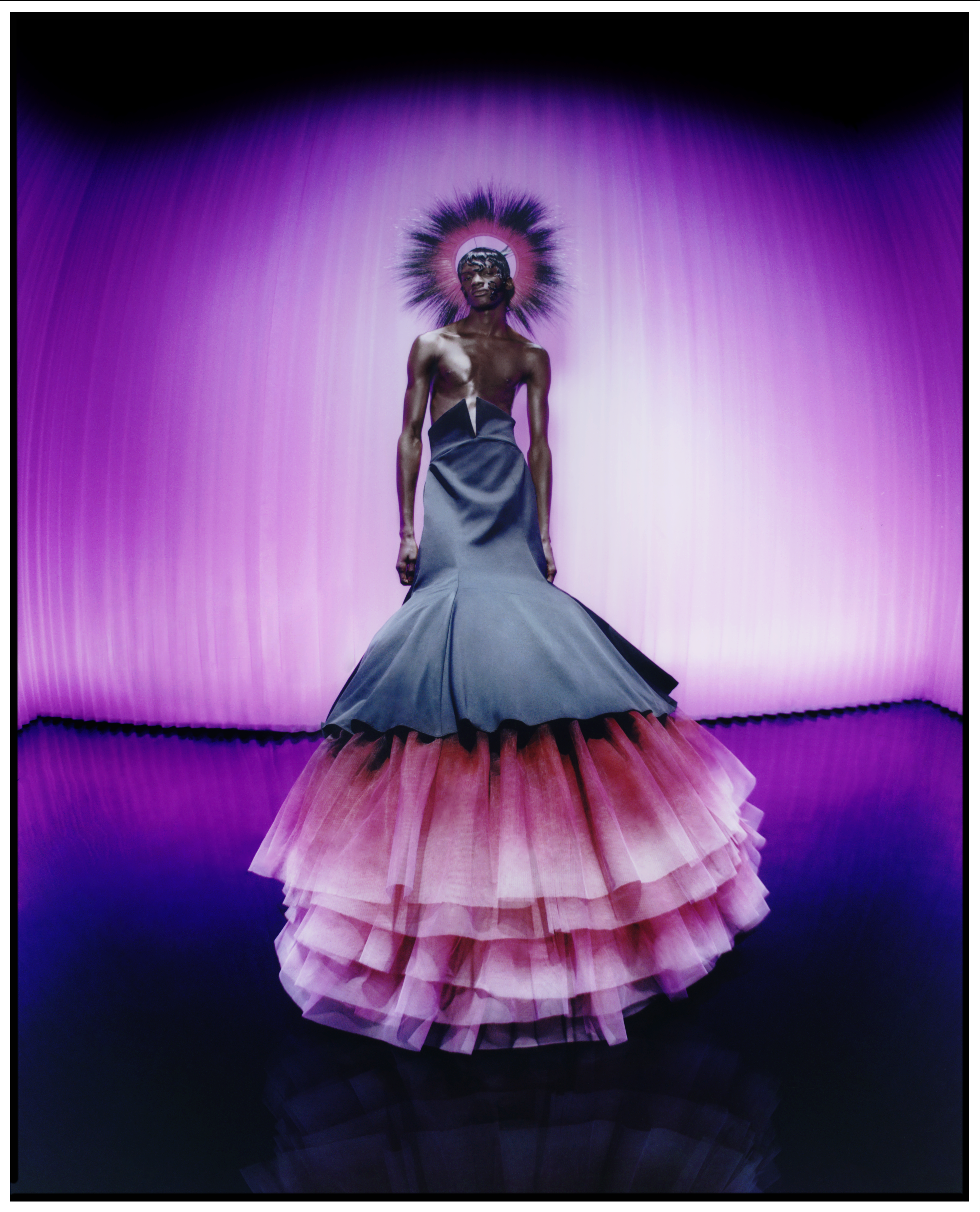 “In the past, women were always portrayed overly displaying their bodies or showing cleavage through low cuts. I really wanted to play with those proportions on more of a male-esque body type, and to be able to reclaim that as a less sexual and more empowered image,” said Reed, who launched the collection on Instagram.

“Each look is surrounded by a bright light in burnt orange, deep purple or royal blue. “The colors match so clearly this idea of auras. It’s different facets of a person or different stages of rebellion, which come together into that character’s most fluid self,” Harris explained.

Creating the collection required Reed and his small team to become extra resourceful: Sourcing local fabrics, reconstructing charity shop finds and relying on many a stranger’s generosity, from the currently-shut hotel that offered Reed one of its rooms as studio space to the abandoned pub that let the designer use its outdoor space to spray-paint the 250 meters of tulle that feature in the collection.

“It’s a real labor of love. Our fingers were bleeding because we didn’t have access to proper sewing machines and had to use domestics or sewing needles,” added the designer, who saw the process as an opportunity to learn how to create as little waste as possible and get creative with reworking and reimagining existing fabrics and garments.

“It became this really beautifully authentic process of not only working with friends and local artisans, but thinking in a way that I think is very modern and aligned with the future of fashion.”

Reed has a compelling vision for what the future of fashion should look like, and it involves the return of showmanship and fashion that challenges its audience and the structures within.

“My generation especially, and my fellow young creatives, are really embracing this idea of bringing the art back into the fashion,” said Reed, recalling the Lee Alexander McQueen era. “That’s really not the glitz and the glamour but the showmanship that might make people feel freaked out, or weird, and encourage them to question who they are. I really think we can hopefully take back fashion and make it something completely different — not that it was bad, but I think it needed a little bit of a wake-up call.”

Then again, the idea of the struggling artist who frowns upon any commercial endeavor — celebrated in the 1990s and early Aughts — isn’t something that Reed, like many of his Gen Z peers, subscribes to.

In fact, while he’s been working for custom-made pieces for Styles or larger-than-life corseted demi-couture separates, he has also been spearheading a makeup collaboration with MAC and a line of candles, developed with his mother.

“I really want my clothes to be vessels for a message, but I realistically know that the world can’t have a Harris Reed gown or suit in their closet, but I hope the messaging on self-expression can be infused into candles, makeup and all the exciting collaborations I have coming up,” said Reed, who is also looking to shake up the structure of a modern fashion business, shifting the focus away from multiple ready-to-wear collections a year to collaborations, made-to-order pieces and alternative product categories.

“My [niche] in fashion is fluid clothing for everyone and I also want to find my angle on how I’m going to grow my business and break down those barriers. You can be a prospering brand, make art, create pieces that will be used for major editorial moments and then just find clever ways to bring that to the masses.”

A digital native and natural storyteller, Reed chose to launch his collection on Instagram, by way of imagery and a short film created by a team that included Styles’ stylist Harry Lambert and DJ Honey Dijon.

“I’ve only really known this digital space. By doing this film, I realized the power you have in the virtual realm,” said the designer, pointing to the importance of fashion schools better incorporating social media communication into their courses.

Does that mean there won’t ever be a Harris Reed show, even after the world opens up?

“When I was at Gucci and other places, I saw the extremism, the tears in Alessandro’s eyes, how guests reacted, so there’s obviously that yearning. But I’m intrigued to see how we can push what a catwalk looks like — I don’t think I could ever do the up-and-down walking,” said Reed.

“I want to do a physical form of expression, but I have a feeling it might look more along the lines of a play, opera, event. It has to be way more performative — my generation is used to TikTok, Instagram, Twitter, Tumblr, everyone’s seen behind the silver curtain. The front row means less and less as we get older and things get more and more exposed. I would love to reinvent what that front row looks like.”

But above all, Reed’s ultimate mission will be championing fluid expression and making sure children growing up can see themselves, no matter what gender they identify with. It’s why any criticism and noise around the dress Styles wore just fueled Reed’s determination even further.

“Having grown up in America, where if you weren’t white or straight something was wrong with you, I knew that putting a man on a dress in American Vogue would stir some controversy. But what’s great is that I took peoples’ questions about identity and their issues with self expression as fuel for my future work and what I do. It was such a powerful moment: I genuinely feel that nine-year-old me sitting in a playground flipping through a magazine, if I would have seen a man in a dress, I would probably come into myself that much quicker and probably had way less years of crying and trying to figure out who I am.”