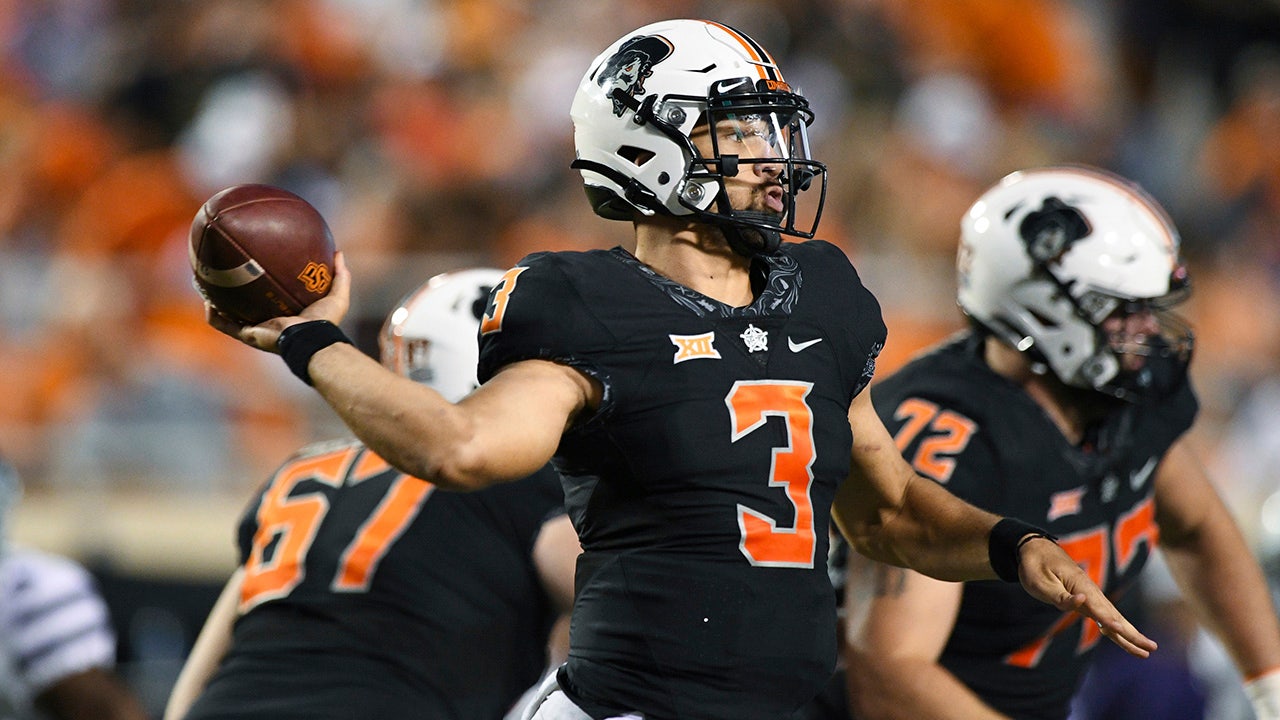 Spencer Sanders completed 22 of 34 passes for 344 yards and two touchdowns, leading Oklahoma State to a 31-20 victory over No. 25 Kansas State on Saturday night.

“I made sure I stayed and I watched some extra little film this week, I just wanted to play better,” said Spencer, who threw for just 82 yards last week in a 21-20 win over Boise State. “I feel like we all played better, everybody. Heck of a job by the defense. I’m happy we won and I’m just excited to see how much further we can progress.”

The Cowboys failed to score in the second half for the second consecutive contest.

“In the second half, we really weren’t trying to do that, in fact we talked about not doing that,” OSU coach Mike Gundy said of letting up with a big lead. “We didn’t block as well for a quarter and a half. Fortunately, defense was playing good, we started to get a pass rush going in the second half and get some pressure on those guys.”

Kansas State had been ranked 20th in the country in total defense, and that showed in the second half.

“I thought our defensive line played much better in the second half than we did in the first half,” added Kansas State coach Chris Klieman. “I thought our linebackers and our skills kids in the secondary were able to get off blocks and make some tackles. It’s a good running back we faced, and Sanders was really tough today.”

Deuce Vaughn, who entered the game leading the Big 12 and ranked eighth in the nation with 371 rushing yards, gained just 22 yards on 13 carries for Kansas State (3-1, 0-1). Vaughn did collect a team-high 73 yards and a TD on five receptions.

“We’ve got to be better. We rushed the football last week exceptionally well and then it sets up everything else,” Klieman said. “When we’re not able to rush the football, then we’ve got to design some things, whether it’s spreading people out, to get people open.”

Kansas State: After five consecutive games of 200-plus rushing yards dating to last season, the Wildcats gained just 62 on the ground, including minus-3 in the second half. With starter Skylar Thompson out due to injury, Kansas State used two quarterbacks, with each having some good moments and some not-so-good. Will Howard started and was 4-of-12 passing for 50 yards. He also lost a fumbled snap late in the first quarter that was recovered by Oklahoma State’s Malcolm Rodriguez in the end zone for a touchdown. He ended up leading the Wildcats in rushing yards with 28 on three carries. After Howard got hurt, Jaren Lewis came on in the second quarter and completed 10 of 19 passes for 148 yards, a touchdown and an interception. Howard came back in a couple of times but couldn’t keep going and Lewis returned several times.

Oklahoma State: The Cowboys got receiver Tay Martin back in the lineup and it made a big difference in their passing game. The “super senior” returned after missing the previous two games due to injury, giving Sanders more options and the ability to run a more balanced offense. The Cowboys had just 13 pass attempts last week while running the ball 57 times, in part because they were missing four key receivers. But this time, OSU maintained a somewhat even equilibrium, rushing 43 times versus 34 throws. Martin had six receptions for 64 yards and a touchdown in the first half and ended up with nine catches and 100 yards overall.

“He’s played a lot of football, so he becomes a threat out there,” Gundy said of Martin’s return. “Most of the time, they kept two people out there with him, which allows us to rush the football more.”

With the loss, Kansas State will undoubtedly drop out of the poll. Oklahoma State, which received votes and was several spots out of the top 25, should probably make it in on the next poll.

Oklahoma State’s defense came up with another strong performance with the game on the line. In the fourth quarter, after K-State had already whittled a 21-point deficit into an 11-point disadvantage, the Cowboys held the Wildcats to minus-six yards of offense and forced three straight 3-and-out possessions. Overall, Kansas State was just 2-for-12 on third downs.

“We bottled up (Vaughn), he’s difficult to bring down, we were able to crowd the line of scrimmage more, because we were playing really well on our corners and in coverage,” said OSU defensive coordinator Jim Knowles. “(Howard) went out a little bit, so that took out some of the quarterback run game and that made them a little more one-dimensional.”

Kansas State: Things don’t get any easier for the Wildcats, as they return home to take on No. 4 Oklahoma.

On The Rise: Who Can Stop Nigeria’s Newest Kid Wonder?

What Is Going On With This Super Eagles Star?