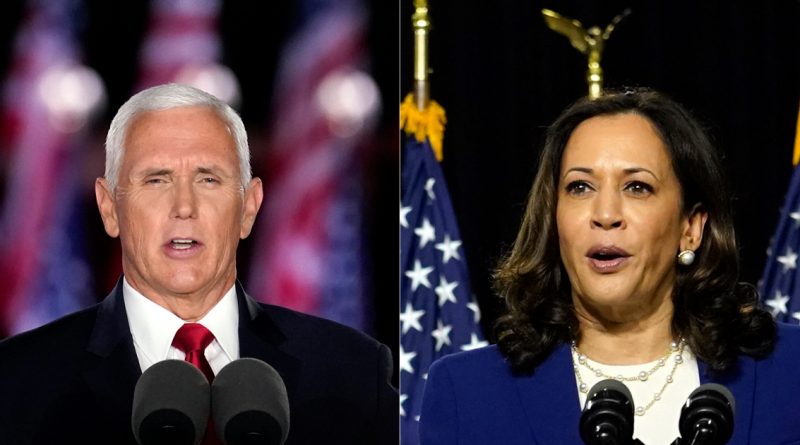 The president lost his trade fight with China and has lost more jobs than any other US president, Harris said.

“This is where the economy is right now, and it is because of the catastrophe and the failure of this administration,” Harris said.

Pence retorted that Trump took on a fight with China that “Joe Biden never fought.”

Harris said that Trump passed a tax bill that benefited the rich. While the Tax Cuts and Jobs Act did benefit the wealthy more than low and middle income workers, it did cut taxes for American households up and down the income scale.

Pence credited Trump’s policies including tax cuts, regulatory rollbacks and a crackdown on trade practices the Trump administration considers ‘unfair’ for the economy’s strength pre-COVID.But the jury is out on how much tax cuts have contributed to pre-COVID growth. Moreover, manufacturing jobs and factory output started to decline after Trump launched a trade war with China in 2018.

Pence again claimed something President Trump regularly claims: “According to all of the best estimates, our air and land are cleaner than any time ever recorded, among the cleanest in the world.”

That’s mostly false, according to fact-checking organisation PolitiFact.“No ranking places the United States at the top of their list for cleanliness,” they’ve concluded.

No, the United States isn’t the cleanest country. Trump has said this in the past. It’s Mostly False: https://t.co/kp3bJhURhp #VPDebate

“Saying something nice about your opponent, as Pence did in congratulating Harris on the ‘historic nature’ of her nomination, has become a feature of debates in recent years,” says Al Jazeera debate analyst Alan Schroeder.

“It’s not a bad idea, especially in a time of polarisation – and especially after Trump’s nastiness toward Biden last week.”

“On day one, Joe Biden is going to raise your taxes,” Pence said.

“Joe Biden and Kamala Harris want to raise taxes. They want to bury our economy under a $2 trillion ‘Green New Deal’,” Pence said, by banning fracking and fossil fuels.

Harris said Biden has declared he would not raise taxes on Americans making less than $400,000 a year in income.

“Pence has an almost impossible job defending the White House’s response to the pandemic,” Al Jazeera debate analyst Alan Schroeder argues, “but when he uses a phrase like ‘you’ll always be in our hearts and prayers,’ it’s more insulting than comforting.”

The White House Rose Garden event where President Trump announced Amy Coney Barrett as his Supreme Court nominee is being pointed to as the event responsible for the spread of coronavirus among the White House staff.

Pence addressed that tonight arguing that holding the event, despite the risks, is about “respecting freedom”.

“President Trump and I trust the American people to make choices in the best interest of their health. And Joe Biden and Kamala Harris consistently talk about mandates, not just mandates with the coronavirus, but a government takeover health care, the green new deal all government control. We are about freedom and respecting the freedom of the American people,” Pence said.

“President Donald Trump did what no other American president had ever done. That was, he suspended all travel from China, the second largest economy in the world. Now, senator, Joe Biden opposed that decision. “

21:20 ET – Pence accuses Harris of ‘playing politics’ with US development of a vaccine

Pence, instead of answering the second question on the role of the vice president, scolded Harris for saying she did not trust the Trump administration’s accelerated efforts to develop a vaccine for the coronavirus.

“The reality is we are going to have a vaccine in record time,” Pence said, telling Harris to “Stop playing politics with people’s lives”.

Al Jazeera debate analyst Alan Schroeder: “In her first answer, Kamala Harris previews how she will argue her case: Start with a strong, detailed critique of the Trump administration, then pivot to how a Biden administration would do better.

“This ‘two-for-one’ style of responding is something candidates practice in their mock debate sessions.”

21:05 ET – Kamala Harris says US has witnessed ‘greatest failure’ by Trump on COVID-19

The first question from moderator Susan Page went to Senator Kamala Harris on the coronavirus pandemic.

The American people have witnessed what is the greatest failure of any administration in our country,” Harris responded.

The Trump administration “knew” how serious the coronavirus threat was and  “covered it up.”

“They minimised the seriousness,” Harris said. Joe Biden has “a national strategy for testing and contacting tracing” that would be implemented, Harris said.

Susan Page of USA Today will be moderating tonight’s debate and prior to the start, she asked the audience to hold their applause throughout.

“This debate is not about you and me. It is about the millions of Americans who will be watching it,” Page said.

“During the debate, please do not cheer, boo, hiss, or laugh.”

“And if you could send me some good karma, that would be appreciated,” she quipped. “But quietly.”

Tonight’s debate is taking place in Kingsbury Hall at the University of Utah in Salt Lake City and the pool reporter inside the hall describes the set up there: “The stage is set up with three desks and chairs set about 12 feet apart for the two candidates and the moderator, separated by plexiglass screens. … Some 20 seats for guests are set up in front of the stage, at least 6 ft apart.”

The University of Utah selected 60 students via a lottery to sit in the audience, and the tickets they distributed included a liability waiver for the Commission on Presidential Debates and the university regarding coronavirus: “The ticket holder relieves the CPD and the event site host of any and all liability … including in the event of … sickness (including Covid-19).

20:10 ET – This is the third male-female VP debate; the first had some tension

In 1984, the first-ever general election debate between male and female candidates proved treacherous for then-vice president George HW Bush, AlJazeera.com debate analyst Alan Schroeder notes. About halfway through the debate, opponent Geraldine Ferraro delivered a soundbite that resonated with millions of American women: “I almost resent, Vice President Bush, your patronising attitude that you have to teach me about foreign policy.”

For the remainder of the debate, Bush never regained his footing.

Various women’s groups around the US will gather as Kamala Harris, the first woman of colour on a major ticket takes the debate stage tonight.

“I really can tell that Kamala is ready,” said Rahdiah Barnes, the president of the National Association for Multi-Ethnicity in Communications in New York, which pushes for diversity in media, and has organised a watch party. “This is history. She has something to prove, and I’ve heard her say a couple of things over the past couple days, so I can know that she’s getting ready for war.”

19:45 ET – Battling over details in the time of coronavirus

Vice President Pence’s campaign initially rejected the proposal to have plexiglass barriers between the candidates, as a coronavirus precaution, but later relented.

Pre-debate haggling about production details dates all the way back to the 1960 Kennedy-Nixon debates, points out AlJazeera.com debate analyst Alan Schroeder. In past years, on-site negotiators have battled about lighting, lecterns, room temperature, reaction shots – even the colour of the background. Who could have imagined that in 2020 the dispute would involve plexiglass?

Even if Donald Trump had not become the international poster child for COVID-19, he was always destined to loom over the vice-presidential debate, especially after his disastrous opening encounter with Joe Biden, writes presidential debate expert Alan Schroeder.

Now, the president’s illness – and the uncertainty shrouding the state of his health – presents Republican running mate Mike Pence with a tricky challenge. It also complicates the task of Democratic nominee Kamala Harris, leaving her with a delicate line to walk. Even in absentia, even from his sickbed, Trump commands centre stage at the vice-presidential debate.