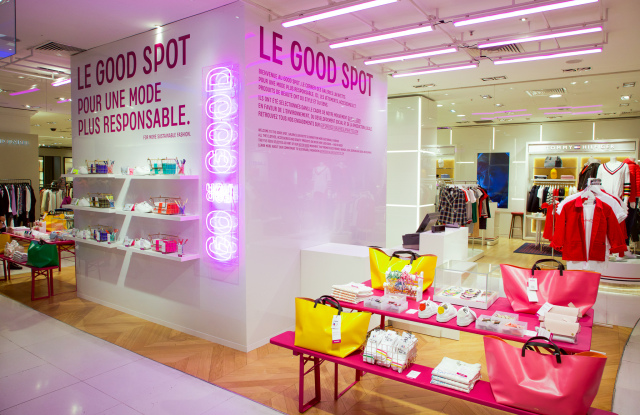 PARIS — Environmental problems are mounting quickly and the coronavirus crisis has heightened consumer awareness — adding urgency to the need for the fashion industry to improve its practices.

In France, a number of players in the fashion industry, including a group of companies led by Galeries Lafayette as well as the “Paris Good Fashion” association, and French government officials, are launching a public consultation process to explore ideas about how to help the community do better with sustainability. The eight-week consultation period will run from Sept. 3 to Oct. 25 and plans are for the French Ministry for the Ecological Transition and Paris city council to present conclusions in December.

“If we want to do sustainable fashion, there’s someone who’s extremely important — the person who buys and wears an item of clothing,” said Sylvie Benard, president of the board of Paris Good Fashion, which unites industry players including professional federations, fashion schools, retailers and fashion show producers to advance the industry’s sustainability and social impact. The organization aims to make Paris the capital of sustainable fashion, in a goal timed in line with the 2024 Olympic Games, which will take place in the French city.

“We want to listen to what the public have to say about sustainable fashion, what are their expectations, what sort of measures, examples and good practices,” Benard said. “We, members of Paris Good Fashion, will listen to what people have to say to identify areas where there is an overall consensus on shared subjects, as well as areas of disagreement — where perhaps not everyone agrees — areas that call for further education, or practices that everyone might agree should be stopped.”

Part of the effort will also be to help improve education around sustainability in order to equip people with accurate information about the industry, which could shift the decisions they make with regard to their clothes.

“For example, most people don’t know that the biggest environmental impact of jeans is from washing them when they have been worn,” Benard explained. “If you wash your jeans every two days at 60 degrees [Celcius] the environmental impact will be much greater than if you wash them once every 15 days at 30 degrees [Celcius], using a detergent that’s safe.”

Paris for Good wants its collective of actors to forge networks, pool resources and avoid doubling up on efforts when projects already exist, Benard said. The organization is also working on a map that shows places in Paris to repair or recycle clothing, places to buy sustainably produced fashion and schools that offer education around the subject.

“Around 100 places already exist,” Benard said, predicting the map would create more local links. “In this city, a lot of things already exist. If a brand, for example, is looking for an artisan or a supplier, the right one might be in Paris. You don’t necessarily have to look further afield.”

Looking beyond Paris, there are also efforts under way to rebuild wool-producing activity in France, linking sheep farmers and textile producers and brands.

In addition to Galeries Lafayette, which served as a galvanizing force for the project, other participants include La Redoute, Petit Bateau, Vestiaire Collective, Who’s Next, Eram and Etam. Make.org is providing the platform, which is built around the question “How can we work as one to make fashion more responsible?”

“We’re emerging from a period that was extremely affected by the lockdown,” Galeries Lafayette director of image and communication Guillaume Houzé, told WWD during a phone interview. “We wanted to insist on the notion of working collectively.”

Galeries Lafayette launched a campaign three years ago called “Go for Good,” which highlighted ethical and sustainable qualities of around 500 labels, including high-end handbags made with vegetable tanning techniques. Last year, the group added more products and expanded the number of participating brands. For this back-to-school period, the idea was to cast an even wider net.

“This time, we really wanted to talk not in one voice but to bring together various personalities, entrepreneurs, associations, start-ups, collectives, brands — to explain how the world is evolving,” Houzé said. “With humility, over the past few years we’ve started to build a solid framework for understanding how these various subjects have evolved these past months.”

The group’s Galeries Lafayette and BHV Marais department stores are organizing in-store events around sustainability efforts for this fall’s campaign, and have reviewed their own environmental objectives.

The BHV Marais store will also feature the Go for Good label, and is organizing an event called “Home Good Home,” featuring 400 brands, services including a secondhand market, repair services and recycling, as well as round table discussions with the European Confederation of Flax and Hemp.

The Galeries Lafayette group said it has made progress on more than half a dozen strategic objectives on the environmental front, noting that Go for Good certified products accounted for 10 percent of sales in its stores, and that it had provided a platform for a couple hundred young brands with an ecological focus, among other areas of progress.

Efforts by the industry to burnish environmental credentials have been multiplying in recent years as consumers increasingly consider brands’ efforts on this front when deciding on a purchase.