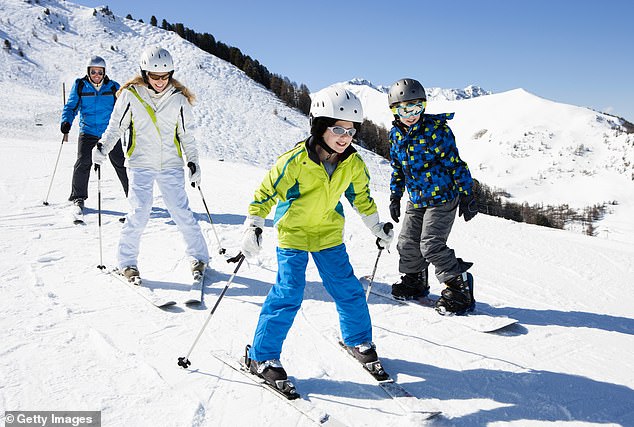 Brits looking to make holiday plans in the near future have been given a boost, as Paris confirmed France would be opening its borders to British holidaymakers soon.

France made the decision last month on December 18 to close its borders to British holidaymakers in a bid to slow the spread of the Omicron variant.

However, with the number of confirmed cases of Covid continuing to soar in France despite the measures, the French government looks set to reverse its decision, according to The Times.

One source even told the paper that the borders could be open again ‘within hours’.

France is looking to open its borders back up to British holidaymakers ‘very soon’, reversing a decision to shut out Brits back in December (stock image) 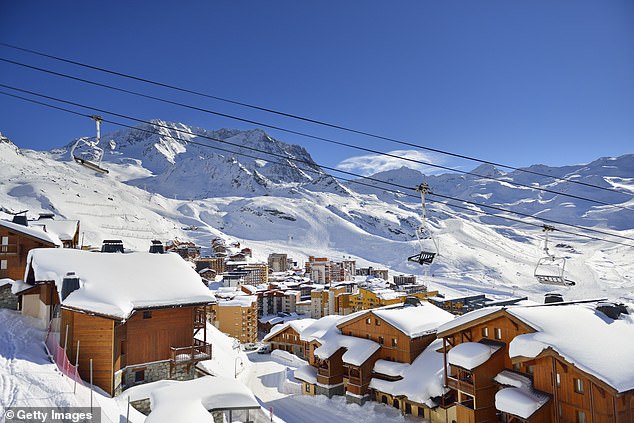 With the number of confirmed cases of Covid continuing to soar in France despite the measures, the French government looks set to reverse its decision – good news for struggling ski resort bosses (stock image)

Confirming the news that the borders would be re-opening, Alexandre Holroyd – the French MP in charge of expats living in the UK – said the changes would be brought in ‘very soon’.

The decision to re-open its borders to British tourists will come as a welcome relief to ski resort bosses – with Brits making up a large chunk of the visitors to the country’s resorts.

With no British tourists, many sky bosses saw a dip in the number of visitors, resulting in drastic financial losses.

Ski tour operator Skiline.co.uk has even issued a statement on the news that France’s borders could be re-opened shortly. 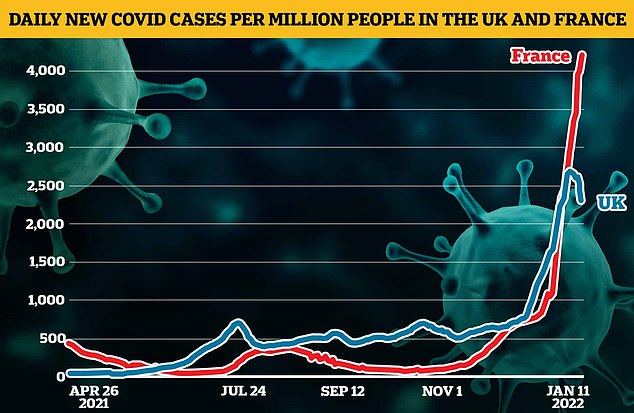 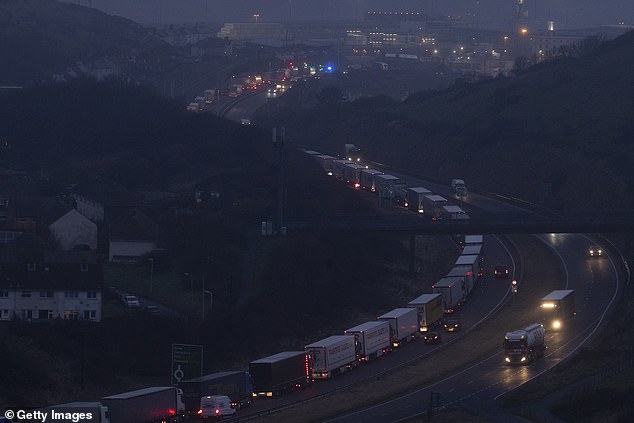 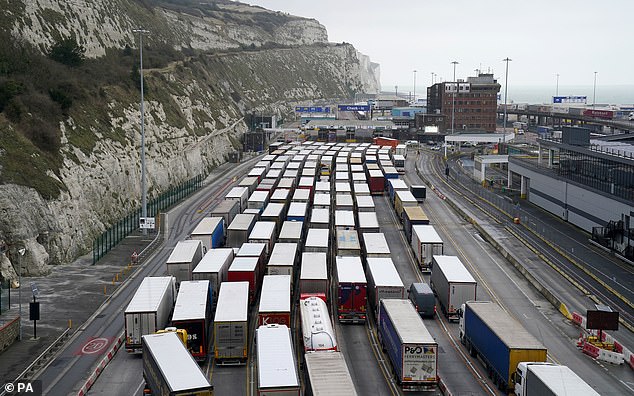 Pictured: A huge queue of lorries is seen waiting to enter the Port of Dover yesterday – with a backlog being caused by the Dover Tap system 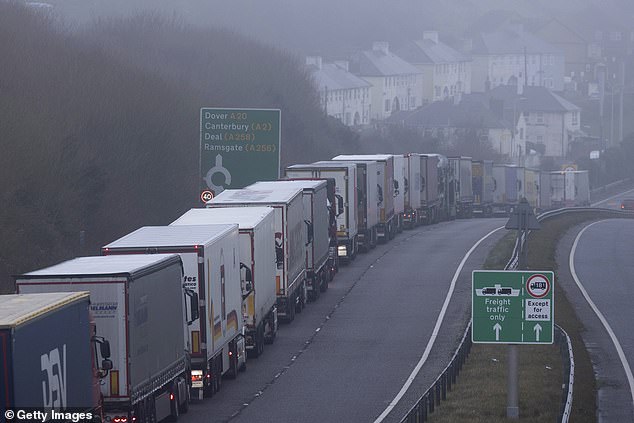 The statement read: ‘We are expecting the French government to make an announcement this Wednesday to confirm that British vaccinated skiers can enter France from Saturday.’

As such, the firm has started selling spots on its trips – though has promised refunds should the borders not be open in time.

Booster vaccines will be required for any holidaymakers hoping to qualify for a pass sanitaire – which permits access to restaurants, museums and ski lifts.

France has already slightly eased travel restrictions for Brits seeking to enter the country – with last week seeing anyone with compelling business trips being allowed into the country.

Current rules dictate that anyone arriving in France from the UK must show a negative Covid test at the border, before completing a 48-hour quarantine, and then undergoing another test. 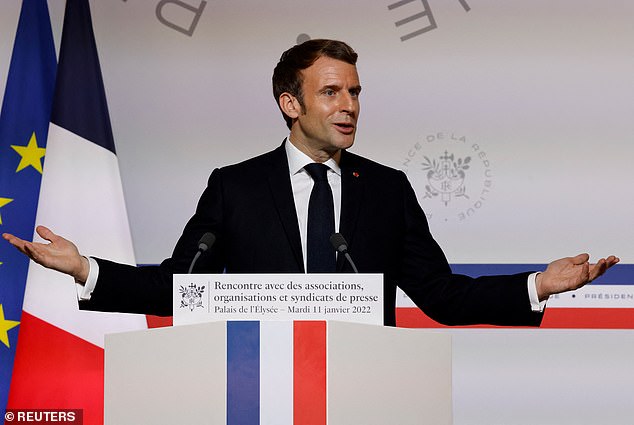 At the turn of the New Year, French tourism bosses urged Emmanuel Macron (pictured) to scrap his travel ban on UK holidaymakers, accusing him of punishing the industry over worsening ties with Britain 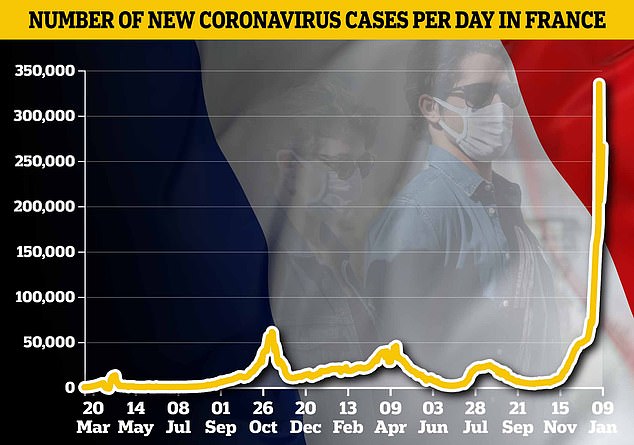 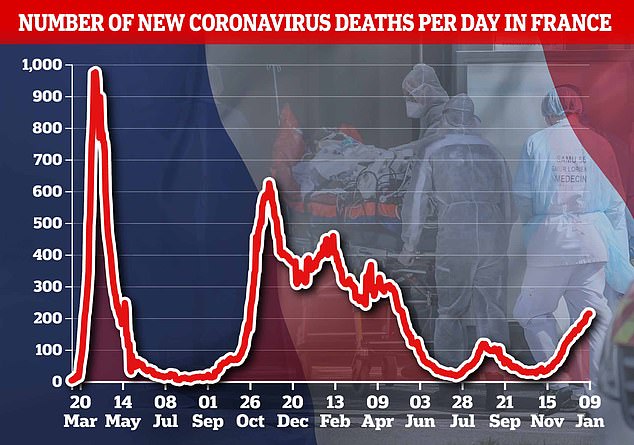 It comes after calls from French tourism bosses at the turn of the new year, urging Emmanuel Macron to scrap his travel ban on UK holidaymakers, accusing him of punishing the industry over worsening ties with Britain.

Francois Badjily, head of the Alpe d’Huez tourist office, suggested France was playing politics with the pandemic. ‘We have the impression that our industry is being made to pay the price for the poor relations between both countries right now, whether it’s about Brexit or fishing or whatever,’ he said.

Mr Badjily said the current rules were incoherent because fully vaccinated tourists from other countries where the Omicron strain is already present are able to visit.

Vaccine passports are needed to enter French holiday hotspots such as ski resorts, as well as restaurants, bars and leisure facilities.

Alpe d’Huez draws a quarter of its visitors from the UK every year, and Mr Badjily added: ‘Why should a Briton who meets these criteria not be allowed to come, but the French and Belgians can?’ 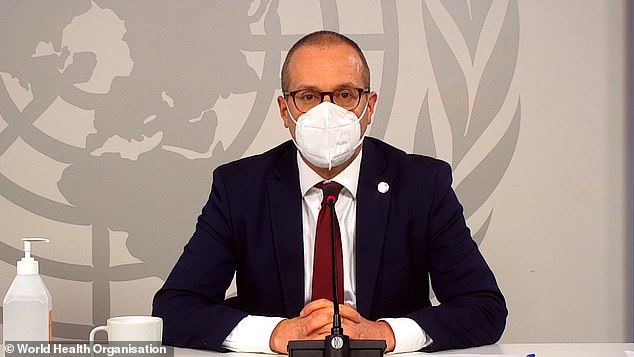 WHO regional director Hans Kluge warned yesterday that the Omicron variant will infect 50 per cent of Europe over the next two months at its current rate (Pictured: Hans Kluge during video press conference on Tuesday)

It comes as the World Health Organisation said this yesterday that more than half of people in Europe are on track to contract the Omicron coronavirus variant in the next two months if infections continue at current rates.

‘At this rate, the Institute for Health Metrics and Evaluation (IHME) forecasts that more than 50 percent of the population in the region will be infected with Omicron in the next six to eight weeks,’ Kluge told reporters.

The WHO’s European region comprises 53 countries and territories including several in Central Asia, and Kluge noted that 50 of them had confirmed cases of the Omicron variant.

According to the WHO, 26 of those countries reported that over one percent of their populations were ‘catching Covid-19 each week,’ as of January 10, and that the region had seen over seven million new virus cases reported in the first week of 2022 alone. 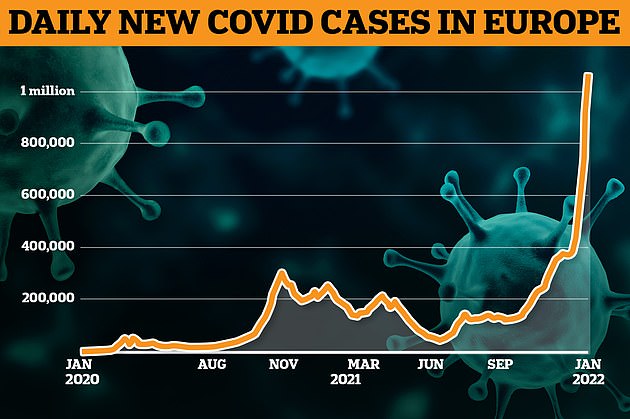 Referencing data collected over the last few weeks, Kluge said the variant was confirmed to be more transmissible and that ‘the mutations it has enable it to adhere to human cells more easily, and it can infect even those who have been previously infected or vaccinated.’

However, Kluge also stressed that ‘approved vaccines do continue to provide good protection against severe disease and death, including for Omicron.’

He cited the hospitalisation rate in Denmark, which he said is six times higher among the unvaccinated than among those who had received their jabs.

Health Minister Olivier Veran told lawmakers yesterday that the Omicron strain leads to less serious complications than previous variants, but since it is highly infectious, it is pushing hospital numbers up quickly, reported France24.

This pushed the seven-day moving average of new infections to a new high of 269,614, marking the 14th day in a row in which the value climbed up.

By Jack Newman for MailOnline

Long queues have built up at Dover with the Operation TAP temporary traffic system implemented to help ease the huge lines of lorries at the border.

Vehicles stood stationary awaiting border checks, just a day after the Port of Dover boss begged the government for lateral flow tests to ease the pressure on the workers.

The Dover TAP, a temporary traffic system to prevent a build up in lorry traffic, was brought in amid tailbacks on the motorways. 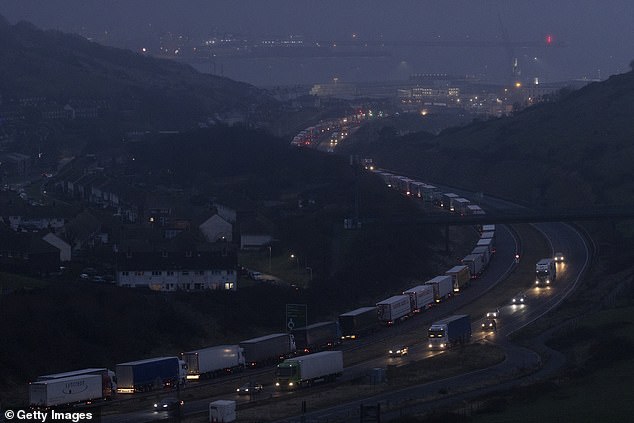 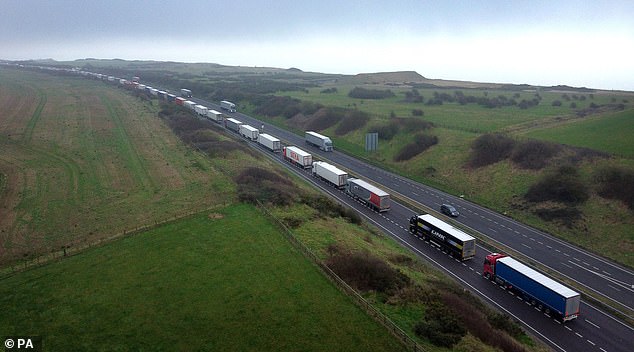 The TAP sees a 40mph speed restriction for all vehicles approaching the port brought in.

Port-bound lorries are required to queue on the nearside to prevent congestion and traffic lights hold back lorries until there is space at the Port of Dover.

The port has applied to be included in the scheme but is yet to receive the supply, leading to potential shortages and causing delays,. 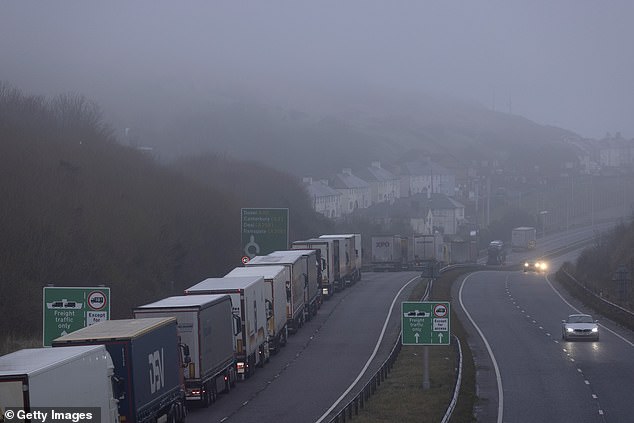 The Dover TAP, a temporary traffic system to prevent a build up in lorry traffic, was brought in amid tailbacks on the motorways 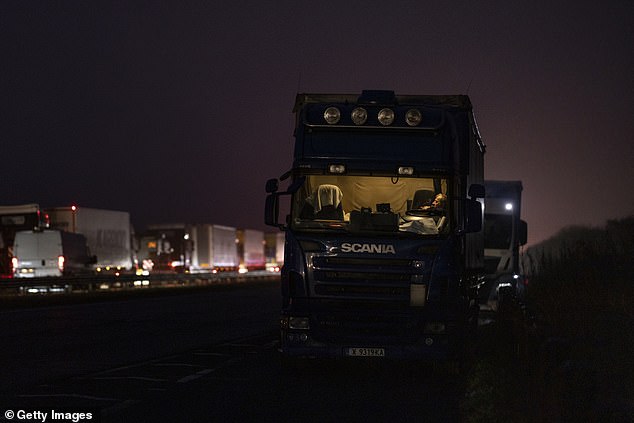 Bannister told the BBC: ‘The government has made lateral flow capacity available to some key areas. They haven’t stepped as deeply into our operations as we’d like them to.’

He said port workers had ‘maintained the operations and the critical flow of goods into the nation’ over the past two years and the port needs to be ‘better prepared’.

He added daily tests would ensure there is the ‘right complements of the people on the ground to facilitate travel’.

Exports across the channel between Great Britain and the EU became subject to full customs controls on January 1, adding to the delays. 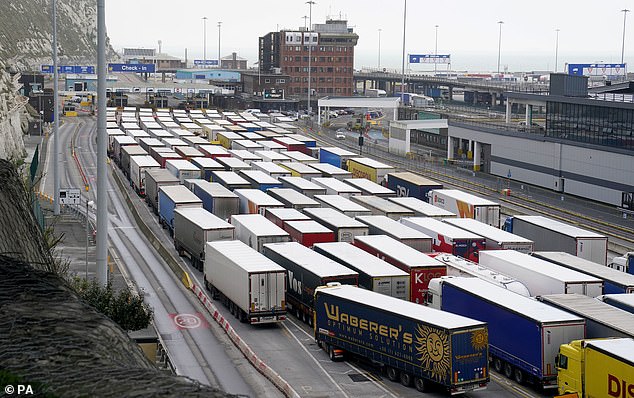 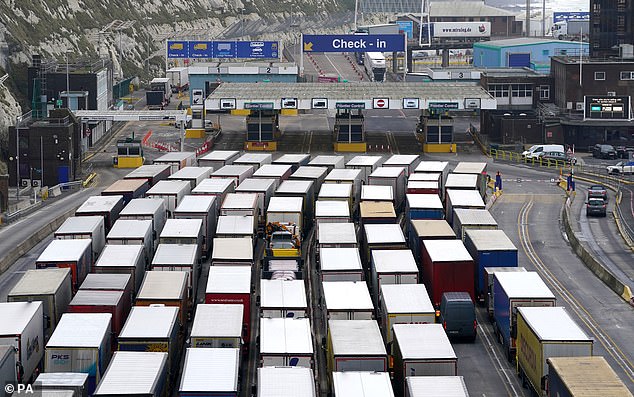 It comes after a ferry boss predicted 20-mile motorway queues if Covid border checks are not lifted by Easter as UK holidaymakers are likely to ditch long-haul trips for holidays closer to home in Europe.

Consumer confidence in travel is currently low as a consequence of the rapid spread of the Omicron variant, which caused a number of new travel restrictions and testing requirements to be introduced over the festive period.

There are hopes, though, that 2022 will see a resurgence in travel demand amid hopes some restrictions will soon be lifted with Britain moving towards a situation where it can ‘live with’ the virus.

Chris Parker, director of capacity and passenger performance for ferry operator DFDS, has warned that an increase in Brits heading to Europe for an Easter holiday could lead to 20-mile queues at Dover if Covid border checks are not eased.

He said checks on passenger locator forms and vaccination passports mean it takes longer for travellers at the border, which could continue to be an issue.

Mr Parker added: ‘Any sort of significant return in terms of passenger numbers, that’s going to escalate the problem.

‘It’s really, really important that we don’t find ourselves around Easter, for example, doing these sort of checks because it simply won’t work.

‘The impact would be queues back on to the motorways of Kent, stretching back 10, 20 miles – there’s no question about that – and in fairly short order.’

Mr Parker added that little notice prior to the introduction of new restrictions had also led to ‘quite a lot of abuse’ for DFDS staff at the border. 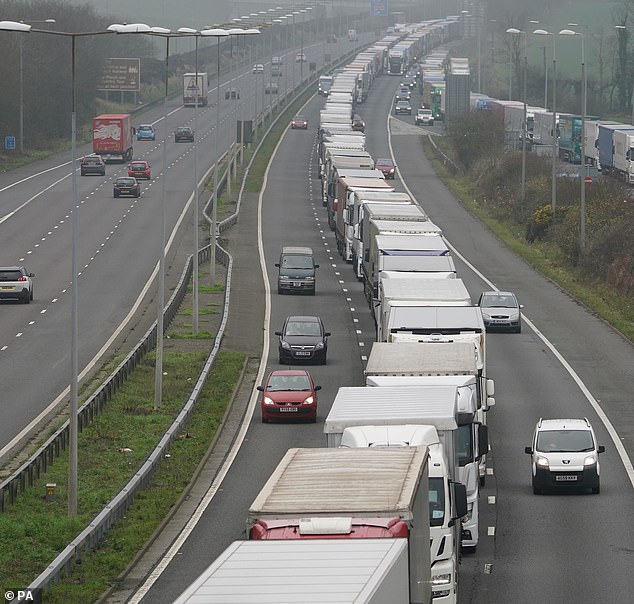 Freight lorries, heading to Dover, queuing on the M20 motorway at the Channel Tunnel Terminal junction in Kent on December 18, 2021 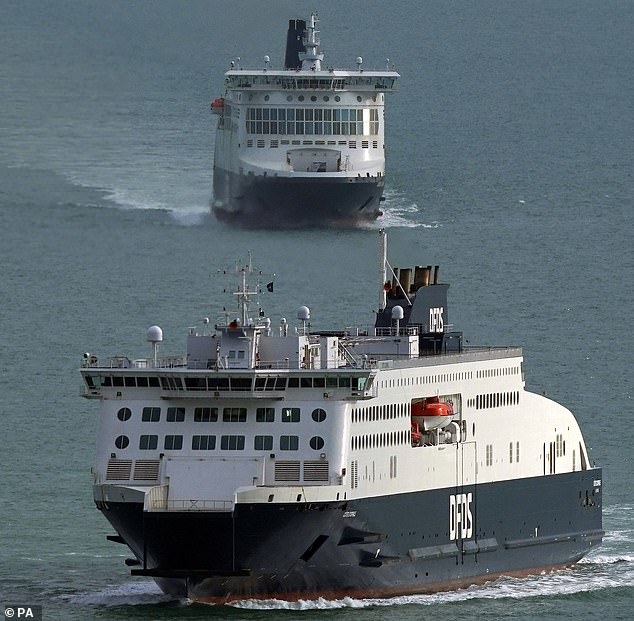 If demand for travel eventually returns to pre-pandemic levels, he also predicts there will be behavioural changes among holidaymakers.

Mr Parker said: ‘I do think that maybe there will be a shift a little bit away from long haul back towards more local holidaying, and I guess that also underlying there’s that element of sustainable travel, green travel.’

As well as the challenges presented by the pandemic, he said the travel industry is still getting to grips with Brexit and how to pursue a greener, more sustainable future.

Asked about restrictions on UK nationals visiting France introduced days before Christmas, Mr Parker hailed the ‘very good news’ last week that the UK Government had rolled back its main restrictions and said ‘we may hear something quite soon’ regarding the French Government following suit. 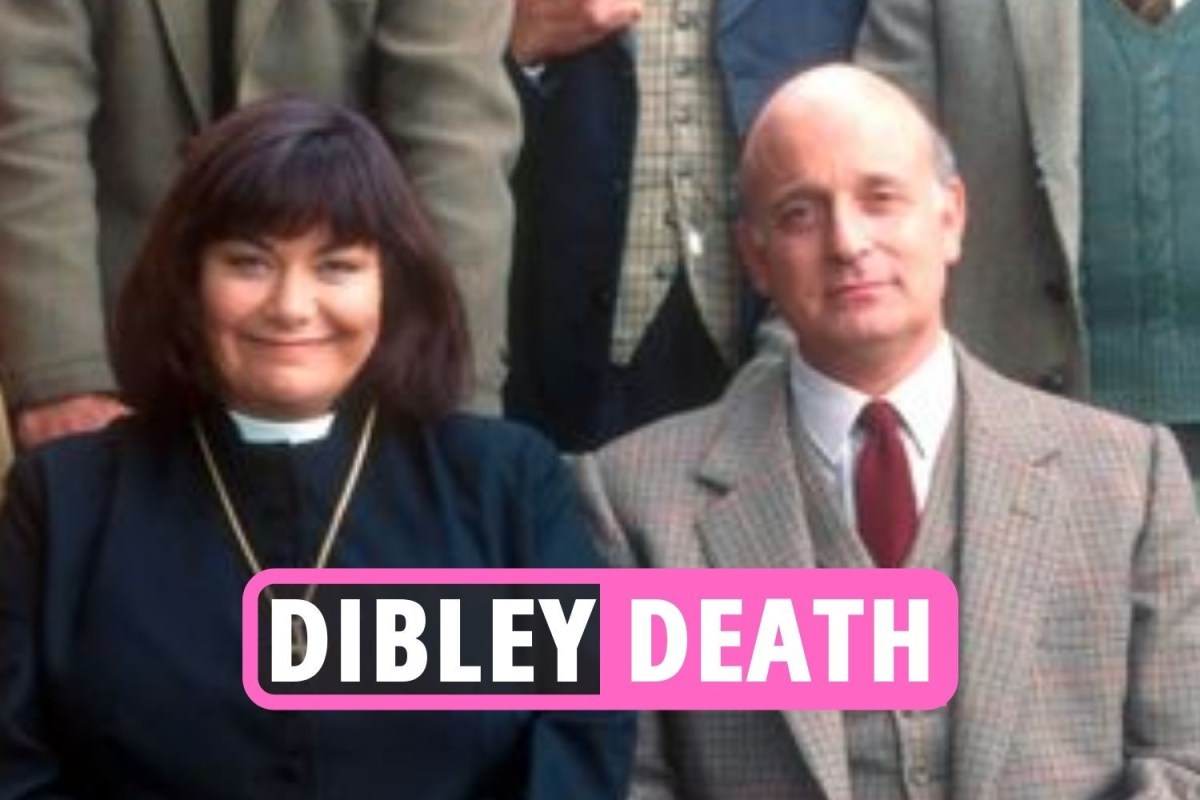 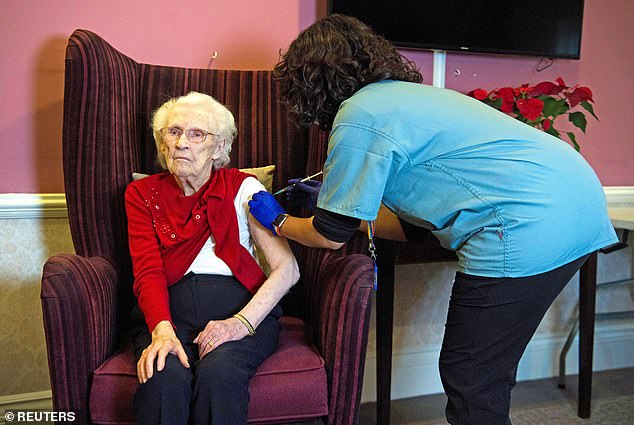