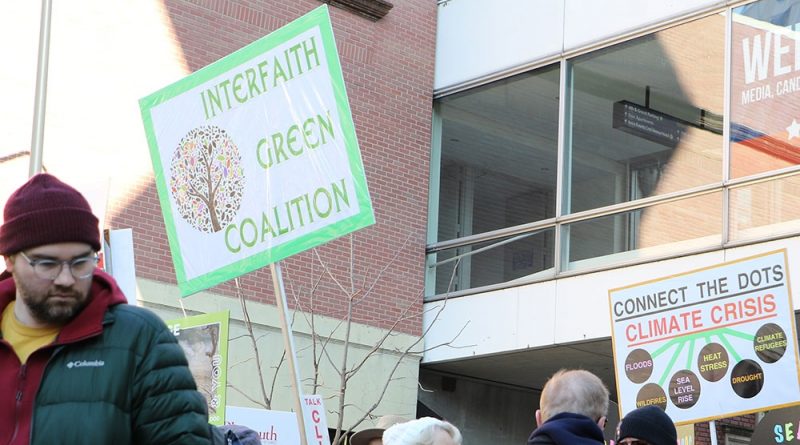 Pella, Iowa, USA – Seated around long tables over lunch, two dozen students at Iowa’s Central College opened their monthly meeting on sustainability by discussing the upcoming Iowa caucuses. Among other things, the group has organised marches to the mayor’s office and written letters to the elected officials.

There was no official endorsement, but Efrain Garcia reminded students to register and show up.

“This is a really big election, because we have a real shot at electing a person, you can determine who that person is, that really supports sustainability,” Garcia said.

Iowans will gather at different sites around the state on Monday evening to choose candidates for the 2020 United States presidential elections.

For this group of students at Central College, a school affiliated with the Reformed Church of America, the election is just as much, if not more, about engaging with an issue many did grow up talking about as it is about the issues that have historically driven evangelicals and other Christians to the polls.

“I come from a very conservative family and a very conservative background, and so I used to think the sustainability movement was a very liberal agenda and a very liberal idea. And I was very turned off to the idea that I was required to take a sustainability class, because it wasn’t something that I was interested in,” said Carter Terpstra, who lives in one of the green pods on campus, where residents are required to present projects in order to keep living there, such as examining the recycling system in the athletic facilities. All students are required to take a class on sustainability.

Terpstra started to change his mind when he saw the issues that the sustainability movement was trying to address some of the things he cared about as a Christian.

“They’re fighting for justice. Why wouldn’t I be on board with that? But at the same time, there were some things where I was like, well, I agree and disagree with even within the whole spectrum of what sustainability is,” Terpstra said. “In hindsight now, it’s better that I was educated on it than not. Because now I know what it’s all about. My preconceived ideas did not meet reality.” 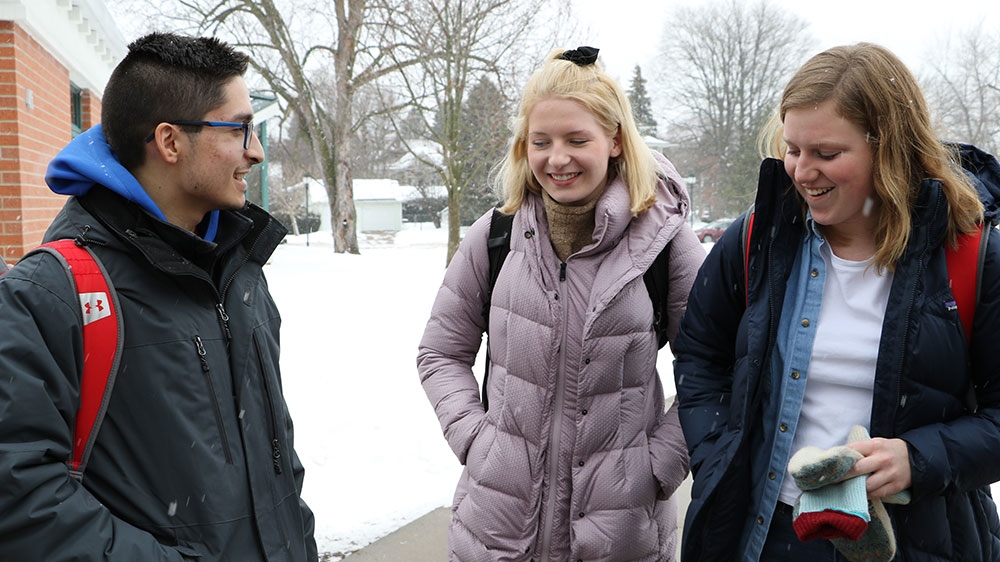 Claire Ackerman declined to say what political party she affiliates with, but said her Christian faith compelled her to consider protection for the earth.

“I don’t really feel a tension between my political party and my belief in climate change,” said Claire Ackerman.

Through one campus ministry she is a member of, Savanna Henning said she and others organised a campus fair that hosted businesses that promote sustainable and ethical business practices.

“I guess I got really passionate about engaging with faith communities when I started seeing people that combined faith with politics and claimed things that aren’t true,” said Savanna Henning. “I would see things on Twitter where people would say, ‘Hey, like even if climate change is real, who cares? It’s all in God’s hands.’ That kind of thing, and I was like, ‘Hey, that’s not what I stand for. That’s not what I believe. We wouldn’t say that about people who are impoverished.'” 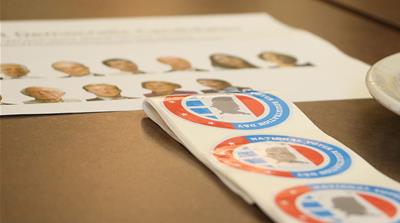 For many of the students who came from religious backgrounds, conversations around climate change were not only absent, they were previously discouraged.

“[In church] we received at least this implicit message on climate change that we needed to keep that out of the church; it was too politicised, it was too liberal, because many of us grew up in more conservative context,” said Kyle Meyaard-Schaap, national organiser and spokesman with Young Evangelicals for Climate Action (YECA), a group has been around for less than a decade, and doesn’t advocate for one political party over another.

A choice between issues?

Because Iowa kicks off the presidential primary and caucus season every four years, much ado is usually made over the influence that evangelicals have, though most major polls indicate the overall religiosity of the state as “average” for the US. It’s not as religious as the southern part of the US, but more religious than the East and West coasts. While Republicans are seen as more vocal when it comes to discussing their faith, a few Democratic candidates – especially former South Bend, Indiana, Mayor Pete Buttigieg – has talked openly about attending church regularly and has called on the Democratic Party not to shy away from this issue.

In general, the last decade has seen a decline in those who identify as Christian. But their influence is still felt, because they reliably show up and vote. 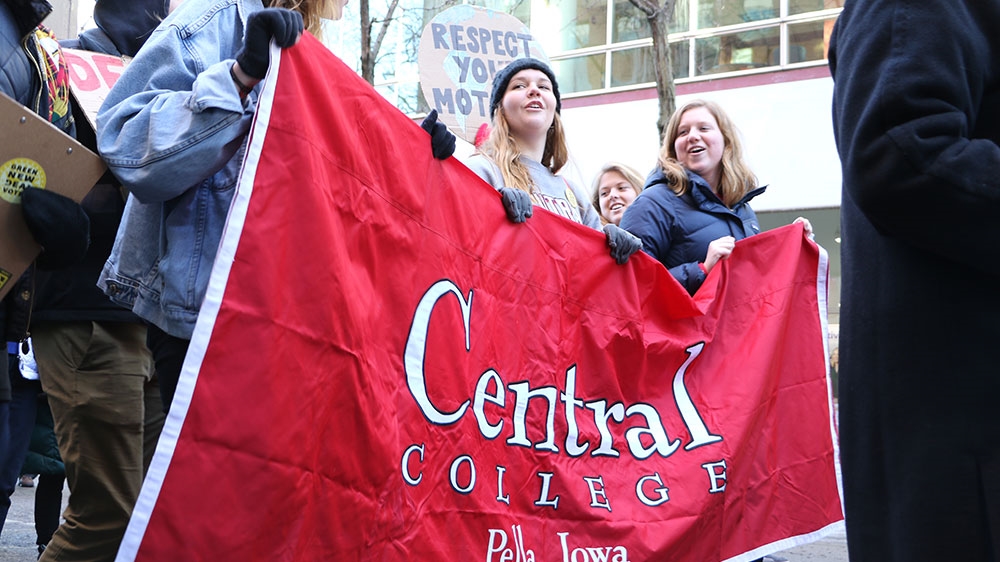 Nationally, the majority of white evangelicals lean conservative and now constitute a third of the Republican base. President Donald Trump, has rolled back many regulations regarding the environment, but has also been applauded by Christian leaders for restricting funding for abortion access and installing new conservative judges on the federal bench.

In a recent poll by the Public Religion Research Institute, 77 percent of white evangelical Protestants approve of the job Trump is doing. That number slides to about half (54 percent ) among white mainline Protestants and white Catholics (48 percent) and overwhelmingly disapproval among Hispanic Catholics (72 percent) and black Protestants (86 percent).

Ryan Burge, assistant professor of political science at Eastern Illinois University, said he doesn’t see climate change yet translating into a big enough issue for young, conservative evangelicals to prioritise it over other partisan issues, including abortion and smaller government.

“I think that they would like the Republican party to not be full of climate deniers, but it’s not enough for almost any of them to change who they vote for,” Burge said.

YECA’s Meyaard-Schaap said many newcomers to the climate action movement see climate change as an extension of them living out their faith, rather than separate from it, and view it as another pro-life issue.

Unlike in primaries, counting in Democratic caucuses in Iowa is done publicly, which means the event tends to draw more vocal activists: people who are less concerned with which neighbours see for who and how they vote.

If they do decide to caucus, Burge said he would expect to see younger evangelicals, who have warmed to the issue of same-sex marriages more than their parents, choose a more moderate candidate like Buttigieg than more progressive candidates like Senators Bernie Sanders and Elizabeth Warren.

“If you see evangelicals caucus for the Democrats, they’re gonna be loud and proud. They can’t do it quietly, because you’re gonna have to have people talk about it,” said Burge. “I think it’s worth watching, but white evangelicals are not going to vote for a Democrat over a Republican over the environment. If they don’t vote for Trump, it’s because they’re not voting for Trump because they dislike him as a person, his morality or his policies.” 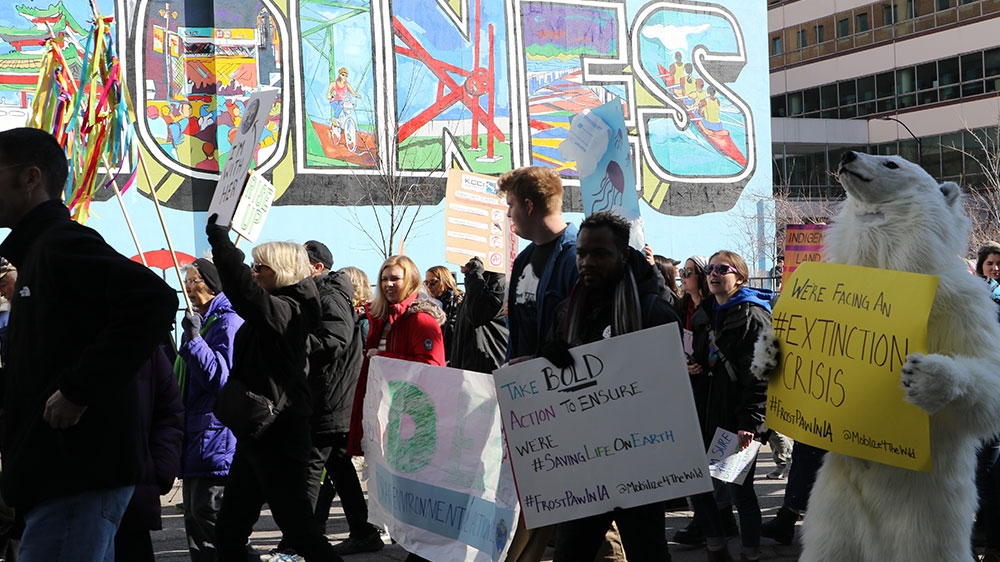 Zach Bonner, lecturer of political science at Iowa State University, agreed with Burge that younger evangelicals are considering issues like climate change in a way that runs contrary to their parents, but it’s not yet a big enough issue to sway that many votes.

He also pointed out that while climate change has gotten some attention this election from several Democratic candidates, the issue is also not the Democratic Party’s number one concern.

“I think the Democratic side has taken it on as a main party platform issue more so than the Republican side, but I think there’s still plenty of other issues that are more front and centre, such as dealing with healthcare or gun violence,” Bonner said.

As for Henning, who did not divulge her political affiliation, she said she is only considering candidates who consider the environment. Moroever, she said she and other young evangelicals – conservative and liberal – are pushing for more than just what happens at the ballot box.

“It’s about changing the mindset of a nation,” Henning said.