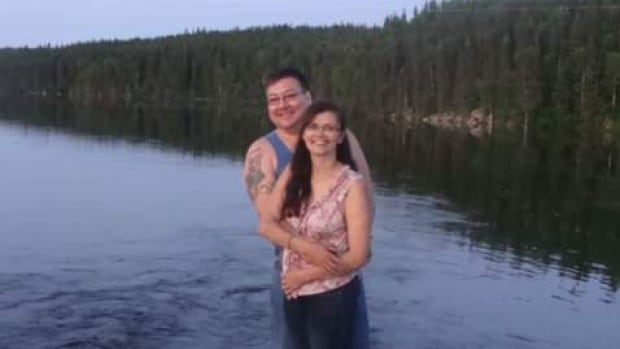 A band councillor from a remote northern Manitoba First Nation says he had to drive his wife, who had broken her leg, more than 300 kilometres to Thompson for medical treatment, after a local nursing station told her she had a sprain.

Brian Wood, of O-Pipon-Na-Piwin Cree Nation (South Indian Lake), says his wife, Carol, injured her leg when a dog ran into her and she fell to the ground.

She was on the side of the road and couldn’t move, so Wood took his wife, who was screaming in pain, to the nursing station to get assessed.

The nurse who looked at her said she didn’t believe the leg was broken, but said she’d make an appointment with a doctor in Thompson for Jan. 13, two days later.

“I said, ‘Well, how can she go on that plane [to Thompson] when she can’t even walk?” Wood said.

Carol was given crutches and told to go home to rest, Wood said during a Tuesday news conference organized by Manitoba Keewatinowi Okimakanak about anti-Indigenous racism in health care.

“She wasn’t even there five minutes,” Wood said.

“But I knew there was something wrong with my wife because she was wailing in pain.”

He said his wife couldn’t even use the crutches because she couldn’t walk at all. He needed to get help from security at the nursing station to put her in their car.

He’s not sure if there is an X-ray machine at the nursing station, but says it was clear that she needed one.

Once they got home, Wood realized his wife’s leg was very swollen and turning blue.

He spoke with the head of the nursing station, and was told he should bring his wife back to get reassessed, Wood said.

But by that time, he didn’t think she could get the proper care at the station, and decided to take his wife to Thompson — a drive of more than 300 kilometres.

Shortly after getting to the emergency room, Carol’s leg was X-rayed, and two fractures were found, Wood said. She ended up being taken by air ambulance to Winnipeg for emergency surgery.

She now has a 35-centimetre scar on her leg, and is recovering in Thompson, said Wood.

“I find that very appalling,” he said. “No one should be treated that way.”

CBC News contacted both Shared Health and the Northern Health Region for comment.

Employees of the Northern Health Region must take a two-part cultural proficiency training course, said a spokesperson for the health authority.

The Northern Health Region has processes in place to deal with allegations of racism brought forward, they added.

CBC News has also contacted the federal government, which is responsible for health care on reserve, for comment but has not received a response.

That Wood’s wife had to travel for hours with a broken leg just to get assessed is outrageous, said Dr. Barry Lavallee, the medical advisor for MKO health entity Keewatinohk Inniniw Minoayawin.

“It is substandard care, and that substandard care can really promote torture and suffering for First Nations people trying to seek help,” he said during Tuesday’s news conference.

The conference was held via Facebook to highlight anti-Indigenous racism and unfair treatment in the health care system ahead of a virtual conference on the issue.

The national online event, titled Addressing Anti-Indigenous Racism in Canada’s Health Care Systems, will take place Wednesday and Thursday and bring together First Nations, Inuit and Métis leaders, along with government and health care officials to discuss how to address anti-Indigenous racism in health care.

The goal of the event is to come up with concrete actions that can be taken, says a backgrounder from Manitoba Keewatinowi Okimakanak, which represents First Nations in northern Manitoba.

MKO Grand Chief Garrison Settee said First Nation leaders have been raising these issues for years, if not decades, with government officials but feel their concerns have never been seriously addressed.

MKO also says any Indigenous person going into hospital needs to be allowed to have one advocate with them, regardless of COVID-19 restrictions.

A medical escort is someone an Indigenous patient who is admitted to hospital, in emergency or urgent care, or receiving ambulatory care, says they need for support.

That principle is now part of Shared Health’s visitor guidelines, the spokesperson said, and includes the designation of essential care partners, who can keep an eye on the patient and help provide medical history, decision-making and translation, and explain discharge instructions.