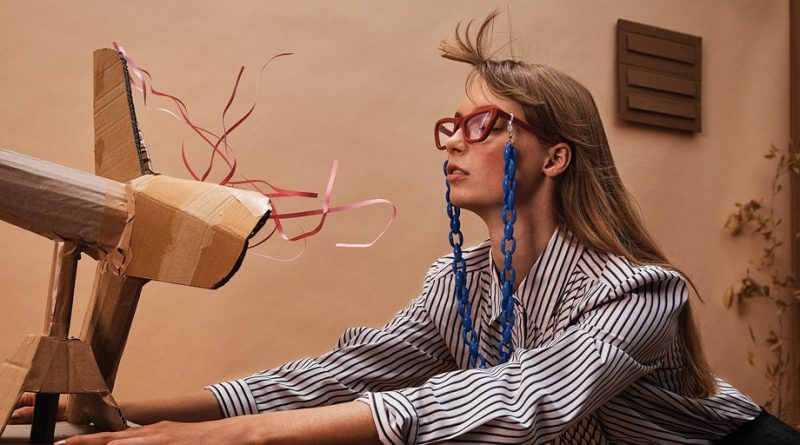 LONDON, United Kingdom — In recent years, a wave of start-ups have promised to protect the digitally native generation from “blue light” emitted from laptops, tablets and smartphones with specially engineered lenses housed in fashionable frames.

Until recently, the concept was still pretty niche. But when the pandemic forced countries across the world into lockdowns, retailers and brands reported sales of the category soaring, as work meetings and social meetups migrated from boardrooms and bars to Zoom and Facetime.

Even as lockdowns begin to ease up, many companies plan to allow remote working well into 2021 and beyond.

The jury is still out on whether these lenses actually work. Brands advertise benefits including decreased eyestrain and better sleep. A 2017 study by the University of Houston College of Optometry found that blue light does impact sleep quality, and wearing screen glasses before bed would improve sleep. Yet, in the same year, the College of Optometrists found there was “no strong evidence” that these lenses alleviate eye fatigue or improve sleep quality, said Dr. Susan Blakeney, clinical advisor at the UK trade group.

However, inconclusive evidence around the effectiveness of these lenses hasn’t stopped shoppers from snapping them up.

At Revolve, which started carrying blue light-blocking glasses from The Book Club in 2018, sales of the category more than doubled during the lockdown’s early days.

“Everyone is very much into wellness and now more than ever we are on our computers doing numerous Zoom meetings,” said Lauren Yerkes, VP of buying and merchandising at Revolve.

As consumers redirect spend geared towards the new pandemic-induced lifestyle, screen glasses could provide an opportunity for the eyewear sector. Sales of spectacles were estimated at $91.5 billion globally in 2019, according to Euromonitor International, but as many optical retailers and manufacturers remain dependent on physical locations, store closures during the pandemic have seen sales slump, with Euromonitor expecting a 14 percent decline in 2020.

Most blue-light glasses are priced under $100 and are typically sold with stylish frames.

Sunshades, the company behind eyewear brands like Le Specs and Karen Walker, launched The Book Club in 2017. Blue light-blocking lenses had just become available from their company’s factories and the company was thinking of ways to make use of the new tech.

The company also manufactures private label ready-made reading glasses for department stores and pharmacies, so decided to produce a line that utilised the blue light lens technology that “didn’t look like the [reading glasses] that you would buy from a pharmacy,” said Tame.

Wholesale retailers like Anthropologie, Nordstrom, Saks and Shopbop account for the majority of company sales. But the pandemic has significantly boosted its direct businesses. Sales on its website throughout March and April were 116 percent up on the same period last year. The surge continued into May and June, the brand said.

“You never predict a moment like [a global pandemic] is the moment that a brand blossoms and all of a sudden starts to sell out and gain attention,” said Tame.

For Jimmy Fairly, which manufactures prescription eyeglasses, sunglasses and blue light-blocking glasses, anti-blue light lenses made up 15 percent of the direct-to-consumer French brand’s global sales across e-commerce and retail. In April, even though stores were closed, this increased to 25 percent.

Blue light glasses may have limited growth potential. The key selling points of the product can be technical, and explaining this in a snappy, eye-catching way that will travel on Instagram isn’t easy. Plus, it’s the kind of reading solution most consumers won’t realise they need until they’ve tried it.

When New York-based Felix Gray launched in 2013, it faced these problems. Founder David Roger decided to get creative with how he markets his new product. He started running programmes with offices around the city, partnering with companies like LinkedIn, Spotify and Barclays to offer employees who sat in front of computer screens all day the opportunity to trial Felix Gray glasses over a four-month period. At the end of the trial, individuals could either purchase the glasses or return them.

According to Roger it was an effective tactic, with many trialists opting to buy the glasses on the spot.

“We even had more people that would call us or email us later and say, ‘Hey, I haven’t had my [glasses] for a week and my eyes are down. Can I purchase them?’” he said.

Tame said the marketing playbook for The Book Club has been different to that employed by other brands in the Sunshades portfolio. For example, the marketing machine at Le Specs, where Hamish is also creative director, has been propelled in part by the brand’s A-list fanbase, which includes Lady Gaga, Gigi Hadid and Rihanna.

“The most powerful way for us to have people find out [about us] is through worth of mouth, rather than trying to promote it on a Billboard or put it on a celebrity,” said Tame.

Whether screen glasses will break into the mainstream is yet to be seen. But, for the time being at least, fashion retailers are on board.

“I think we’ll see this category around for a while, considering the current climate we are in,” said Revolve’s Yerkes.

The Pandemic Changed the Way People Live. How Can Fashion Adapt?

Now That Everyone Has Sweatpants, What Else Do They Want to Buy?

Who Is Still Shopping?