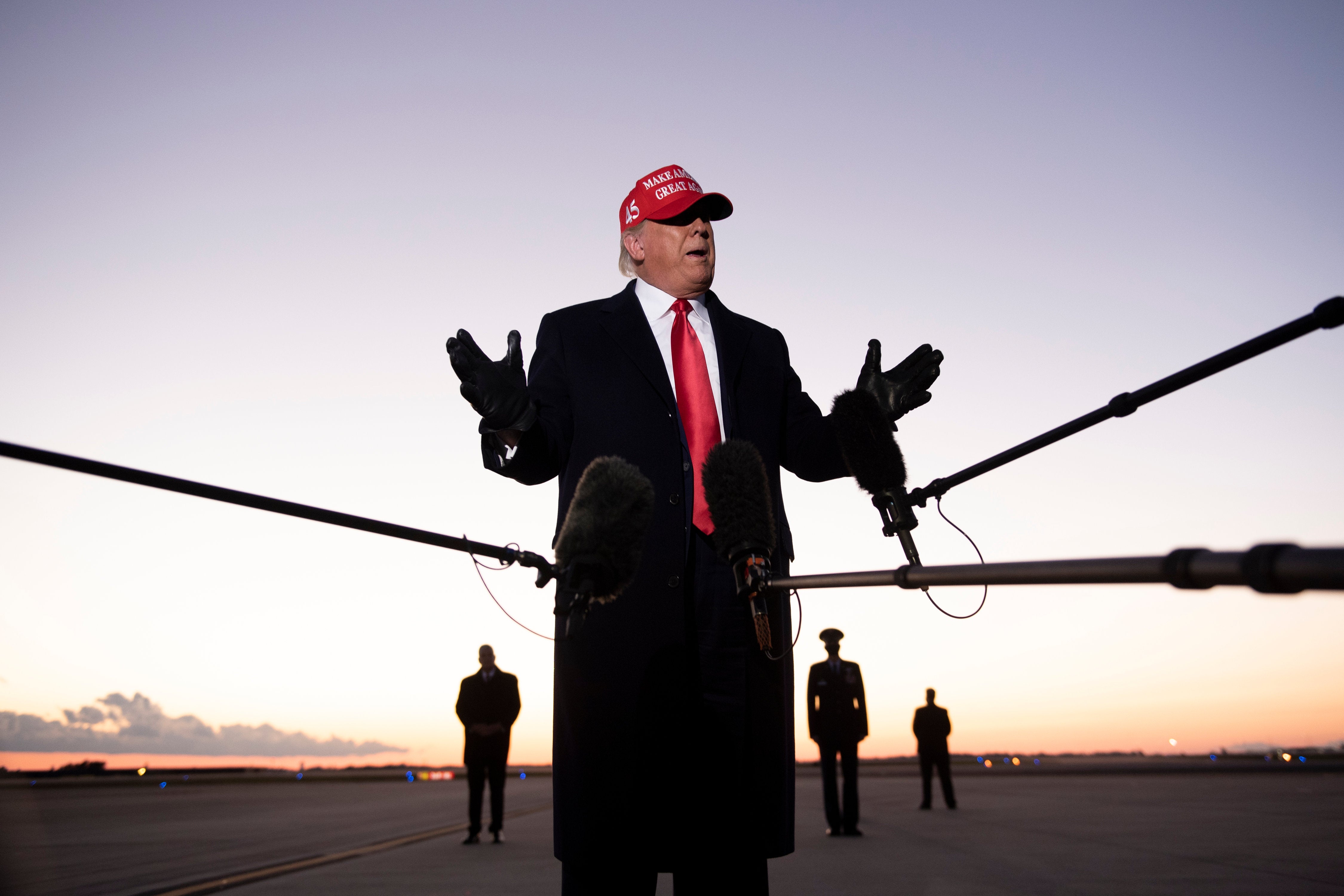 There are fewer than 48 hours remaining until Americans will render their final verdict on the tumultuous presidency of Donald Trump.

The United States remains firmly in the grip of an uncontrolled pandemic that has wrought economic devastation not seen since the days before the 1932 election. And the man who could become the nation’s 46th chief executive in 79 days, former Vice President Joe Biden, holds a far more comfortable lead in national polling averages than Hillary Clinton did at this time four years ago. The razor-thin margins Clinton entered the 2016 election with in key states such as Michigan and Wisconsin have given way to consistent Biden leads, and Democratic insiders have begun whispering about the possibility that he could flip longtime Republican strongholds like Arizona, Georgia, or even Texas.

And yet, Donald Trump remains in his happy place.

With time running out almost as quickly as what little cash remains in his campaign coffers, Trump has chosen to close his second (and perhaps last) campaign for the presidency wrapped in the warm embrace of the crowds who’ve packed his often-raucous rallies since 2015.

Criss-crossing the country at a peripatetic pace, Trump addressed voters at nine separate events on Saturday and Sunday, and is performing his signature act — half stump speech, half improv routine — at five more on Monday, with the last “Make America Great Again Victory Rally” taking place exactly where his last event was four years ago, in Grand Rapids, Michigan.

The 2020 edition of Trump’s signature rallies are a far cry from how he used his 2016 closing events to deliver a disciplined, cogent argument against the more reactive and disorganized Clinton campaign over the last days of the race. But former associates and veteran political observers say the president’s penchant for ignoring or downplaying the country’s problems in favor of delivering grievance, boast, and bombastic red meat to his most ardent fans has rendered him an ineffective messenger for the kind of political persuasion needed to win. Such behavior has, they worry, left him unable to articulate a case for a second term, putting his campaign in the same position as Clinton’s was four years ago.

“He’s Cleopatra, Queen of Denial,” said Anthony Scaramucci, the Skybridge Capital founder and 2016 Trump booster who served 11 days as White House Communications Director before becoming a vocal critic of the president. “He’s denying Covid-19, he’s denying the impact it’s had on the economy, and he’s running a Hillary Clinton loop in his head as it relates to campaigning.”

A former Trump campaign official who worked on the 2016 race said Trump’s frequent boasts and claims of leading the country to economic success are ringing hollow with all but the most dedicated supporters because many of his supporters have been hardest hit by the pandemic-driven economic fallout.

“I saw him on the stump today giving a rally speech in Michigan. And he says: ‘I brought all these factories back,’ but the only problem with that is half — I’d go so far as to say 75 percent — of the people at the rally are unemployed right now,” the official said. “So convincing them that he brought all these factories back and all these jobs when they’re standing there, trying to figure out if they have enough gas in their gas tank to get them home from the rally, is pretty ridiculous.”

The former Trumpworld insider — who requested anonymity because of threats and Trump’s litigious nature — added that Trump’s lack of accomplishments in office are evident to the voters who put him over the top last time, many of whom voted for Obama and Biden in 2012.

“One of the reasons why we won is because we convinced people of what we were going to do and he had no record to run on,” they said. “But now we know, based on his own track record, that — because of his lack of experience in the swamp, as they call it — he was not able to navigate the swamp or defeat the swamp monsters.”

In addition to claiming to have solved all the economic and trade problems he railed against in 2016, Trump has made denying the severity of the pandemic and framing it as a Democratic or media hoax a centerpiece of his stump speech. He has often claimed without evidence that Biden “will turn America into a prison state” by following scientists’ advice on public health measures meant to stop the spread of coronavirus. He has done so while continually airing grievances against the press, civil servants who participated in the special counsel investigation led by former FBI director Robert Mueller, and other obscure figures who are frequently discussed on Fox News opinion programming.

Jennifer Mercieca, a Texas A&M University professor of communication and an expert on political rhetoric, said Trump’s stump speech — which four years ago was replete with both appeals to voters’ fear of change and promises of how he would bring a businessman’s sensibility to Washington — is barely coherent this time around.

“He’s speaking in code… about a reality that exists only on Fox News, OAN, and on right-wing Twitter and other social media feeds. And that just leaves out a lot of people who don’t spend all day highly engrossed in that content,” said Mercieca, the author of Demagogue for President: The Rhetorical Genius of Donald Trump.

Mercieca explained that the grievance- and boast-heavy speeches Trump has delivered at most of his campaign events might still be effective at motivating his most die-hard supporters by getting them more and more outraged (though she noted that such a strategy has also fired up Biden’s base as well.) But such a strategy has limits, she cautioned, because Trump’s decision to file paperwork to start his re-election bid on the day he assumed the presidency — and his decision to make his signature rallies a constant presence throughout his nearly four years in office — has rendered them useless for the purpose of persuasion.

“If there was a word-cloud for American political discourse over the last year about Trump, I’m pretty sure ‘exhausted’ and ‘exhausting’ would be a big term in that cloud,” Mercieca said. “Within an attention economy like ours, outrage is a really well-calculated strategy for gaining attention, but at the same time, you’ve exhausted people and people can only stand to be on tilt and exhausted for so long before they’re finally like: ‘Can we just get rid of that exhausting guy?’”

By contrast, she said the Biden campaign has taken advantage of Trump’s focus on driving his base’s anger by letting the former vice president act as almost a surrogate president during the pandemic.

“During times of national crisis or national stress, we look to the president as the national figure who can call the nation together to talk about our values and how our values will see us through the crisis,” she said, comparing Biden’s use of his campaign rhetoric to fulfill what she called the “priestly role of the presidency,” akin to what George W Bush did after the September 11, 2001 terror attacks. “Trump has not been good at that — he’s not good at articulating American values. He’s just never been good at playing the priestly role. And if you think about his Charlottesville speech, it’s certainly not one where people felt uplifted, but [with Biden] here’s a guy who really understands the best of America, and sees how that best version of ourselves will help us through these difficult times. Trump doesn’t have those words, but Biden does, and his whole campaign… has been just a reiteration every day of him playing the priestly role of the president.”

Another one of the deficiencies of Trump’s 2020 closing argument compared to the one he made when running against Clinton is the synergy between his paid media and his rhetoric.

Tad Devine, who served as a senior adviser to John Kerry’s 2004 campaign against George W Bush, said Trump’s ads have largely lacked the focus they had in 2016.

“When you look at the paid media, the last couple of weeks of the Trump campaign four years ago was very disciplined. It was a strong economic populist message that resonated, he was a very strong messenger for it, and it was about issues that affected the lives of people, particularly economic issues,” he said. “This time, we don’t really see that. It’s just a mixture of complaints, grievances, and a denial of reality.”

If Biden emerges from Tuesday’s election as a victorious president-elect, Devine said the former VP and his team deserve full credit for running what looks to have been a campaign perfectly adapted to the unique circumstances of running for president during a pandemic against an opponent who refuses to surrender the spotlight even for a minute.

“They don’t get the credit they deserve for figuring out a strategy that would work… There were a lot of complaints in many quarters in the Democratic Party, for example, in the spring, that when Trump decided to go out there and be frenetic, have a news conference every day, and constantly be in front of the cameras, Biden had to do the same thing,” he said. “But the campaign had the wisdom to recognize that that was a losing strategy, that it was Trump forcing them to play his game, and they didn’t do it. That decision not to do it, I think, is one of the biggest and best strategic decisions of the campaign.”

Another Democratic strategist, Michael Starr Hopkins, largely agreed, calling Biden’s 2020 effort “the most disciplined campaign any Democrat ever could have imagined”.

“They stayed on message. They stayed away from taking the bait when it comes to Trump in his daily tweets and his daily messaging. And they stayed true to Joe Biden, which I think has been something that has resonated because they haven’t tried to turn him into something he’s not —  they didn’t try to go hard left, or overcompensate and go more moderate,” he said. “They just let Joe be Joe and be in the moment.”

Hopkins said the dynamics of the campaigns have reversed themselves this time around. Where Clinton’s campaign was reactive to every news cycle and often on defense and Trump’s 2016 campaign was disciplined, Biden’s campaign has stayed disciplined while Trump has flailed and tried to win every news cycle instead of thinking long-term: “In many ways, he was the perfect candidate for Biden to run against because… when you run against Trump, you really just need to stay the hell out of his way and let him be his own worst enemy.”