Many will never be sure if Martha Stewart deserved her jail time. Still others are not sure if Paris Hilton had enough time in the pokey. The trial results of both Robert Blake and O.J. Simpson will keep America doubting Lady Justice for years to come with people camped on both sides of the subject.

The legislature borrowed from the sports world when it adopted the “three strikes” rule regarding felonies. Have we taken baseball to seriously or justice too lightly. Why haven’t we adopted any rules concerning celebrities who have carried their eccentricities into social extremism, error or just bad taste?

Perhaps in our worship of celebrities we might use something that very few Hollywood celebrities use to make sense of it all, a verse from the Bible. How about this one from Proverbs 10:12, “…love covereth all sins.” No, this would fail miserably because the Bible’s definition of love rather than being syrupy emotional sycophantism has to do with selflessness and loving the un-lovely. It looks like we will have to go back to the sports world where at least everyone can be on the same page.

Obviously there are those who can’t see the errors and extremes of their favorite celebrities and if they’re in the adoring phase all criticism is mere whispering in the wind.

Insiders like journalist, anchors, and radio personalities already know that they need multiple layers of armor when talking about American celebrities. Comedians are not exempt either. They may not be dumped but grumbling audiences and low ratings can result in unwanted flak from network execs and CEOs.

Layers of first amendment rights, alerted legal departments, disclaimers, and appeals to reason or higher authority all precede the last ditch apology, tears and public groveling that are in store for those who offend. Has we forgotten that if you lie we must defend the lie but if we tell the truth it defends itself?

Long exordiums are not an acceptable part of article writing so it seems only right to get to the point. The point being that if we use the baseball model to check Oprah’s batting record we would be forced to conclude that she has already struck out but for some unknown reason has been allowed to stay at bat for a fourth strike. Even Oprah may not be able to change the rules of the grand old game of baseball.

It isn’t a right or wrong kind of thing that makes the list, it is the question about discernment, character assessment and finding out what is really true or false before dumping it on the public.

Strike one is when Oprah told us that James Frey’s “A Million Little Pieces” was not preceded by only a few little questions and a good helping of background investigation and average discernment. OK, Americans are understanding and apologies and public skewering of Mr. Frey seemed to assuage us. Admittedly celebrity worship does seem like a primary school activity but have we gotten to the place where our celebrities must choose our reading?

Strike two is not just the alleged abuse that took place in Oprah’s multi-million dollar school for exceptional girls in So. Africa. Most would be willing to say that not even she could be expected to successfully ride herd on every project she creates especially one that is half way around the globe.

In America the cries of the “homies” went largely unheard under cover of “they don’t appreciate anything.” Did American girls vote in some secret ballot on whether they only wanted tennis shoes and cell phones? Could only a little discernment have uncovered the influence on worthy girls stateside that may have been unduly influenced by a powerful combination of footwear and high tech manufacturers who pay big bucks to endorsement hungry pop culture and rap celebs? Yet, even the Africans are not satisfied that Oprah’s mission is the right approach for the broader issues that are endemic to So. Africa.

That sentiment is best summarized in a statement made by Boston Globe staffer John Donnelly Jan 20, 2007 under the title “Outside Oprah’s school a growing frustration.” Donnelly wrote, “But for Africans and Americans who work with AIDS orphans, Winfrey’s gift ignored a time-tested path to succeeding with development aid: Communities themselves must identify ways outsiders can help, not vice versa. But many grass-roots activists in Africa say that donors often dictate terms of projects and that recipients, even if they disagree, march to orders.” Here is another matter of discernment or the lack of it that has ramifications across two continents.

Strike three is in the minds of many Americans no more than a lark on Oprah’s part because she has clearly stated that she had never considered endorsing any political candidate before. Now the full weight of the Oprah mystique is being leveraged for Senator Barack Obama’s bid for the presidency. Bible believing conservative Christians are not likely to change their views on gay agenda issues or abortion just because Oprah has sided with Sen. Obama. This is a choice she has every right to make for herself but for the rest of us it says “poor discernment” once again.

In baseball Oprah would be sitting in the dugout by now but Americans have been known to extend the 15 minutes for some celebrities.

Strike four is Oprah’s endorsement of the new age tripe found in “The Secret.” Many articles and entire books have been written against the claims of the Secret but even if they weren’t, the Bible alone sends out a siren signal to those who haven’t given up all discernment just yet. New age coupled with the hunger for wealth is a whole new powerful magnet for Americans who are straddling the fence about spiritual matters more each day.

A generation of teaching the young to question all authority has resulted in the idea that the questioner is the ultimate judge of the answer; doesn’t that make them an authority? A world where shades of gray alone are acceptable must generate the lie that it did not take a mixture of black and white to get the shades. Darn it! You mean there is a source; there are some sorts of absolutes…absolutely!

Gray is considered by most artists to be a hue rather than a color and it is considered mostly lifeless and ugly by fashion experts. New age teaching is a sea of nebulous, unfounded, un-provable, loosely connected gray soup that beckons the undiscerning to they’re own drowning.

Reading crystals, spirit talking, channeling, séance, etc. may seem innocuous until it is attached to direct attacks on the finished work and sacrifice of Jesus Christ on the Cross. Then it becomes what the Bible terms the spirit of Antichrist. As a footnote, the Bible promises that the spirit of Antichrist will pervade the world shortly before the person known as the Antichrist actually steps up to rule every nation, tongue and tribe.

In a revealing but scathing article by the illustrious “Ken” entitled “Oprah Drinks the New Age Kool-Aid” found in “The Right End of the Telescope” is a list of ten of the lessons being offered from the Secret and other new age materials. They are as follows.

1. Lesson #29 asks you to go through your day affirming that “God is in everything I see.”

2. Lesson #61 tells each person to repeat the affirmation “I am the light of the world.”

3. Lesson #70 teaches the student to say and believe “My salvation comes from me.”

5. There is no guilt in you. Your calling is to devote yourself to the denial of guilt.

6. A slain Christ has no meaning.

7. A journey to the cross is a useless journey.

8. Clinging to the Old Rugged Cross is a pathetic error.

9. The name Jesus is simply a symbol of any of the many gods to whom you pray.

Not one of these assertions is even remotely biblically or theologically sound. In fact several of them border on blasphemy. All are errors but none are as patently ridiculous as numbers four through nine. I will let the scriptures answer them point for point because if God’s word is not believed then who’s going to listen to me.

Lessons four and five say there is no sin and there is no guilt in you. The Holy Spirit speaking through the Apostle John said “If we say that we have no sin, we deceive ourselves, and the truth is not in us. If we confess our sins, he is faithful and just to forgive us our sins, and to cleanse us from all unrighteousness. If we say that we have not sinned, we make him a liar, and his word is not in us.” (1 John 1: 8-10)

Lessons six and seven are as close to blasphemous as it gets. The notion is indeed antichrist and is diametrically opposed to the truth. The Apostle Paul warned the Corinthian believers that the cross would indeed seem like foolishness to the world but it was the power of God to save.

“For the preaching of the cross is to them that perish foolishness; but unto us which are saved it is the power of God. For it is written, I will destroy the wisdom of the wise, and will bring to nothing the understanding of the prudent. Where is the wise? where is the scribe? where is the disputer of this world? Hath not God made foolish the wisdom of this world? For after that in the wisdom of God the world by wisdom knew not God, it pleased God by the foolishness of preaching to save them that believe.” (1 Cor. 1: 18-22)

Number nine is the biggest mistake of all. Take away the name of Jesus and mankind is truly on its own. Forget the question of whether we are alone in space; the real question is “are we alone in time without a purpose.” Without Christ we are. New age proudly proclaims that “Jesus is simply a symbol of any of the many gods to whom you pray.”

The Apostle Peter healed a cripple and after being asked by what power or what name he did the miracle he replied “Be it known unto you all, and to all the people of Israel, that by the name of Jesus Christ of Nazareth, whom ye crucified, whom God raised from the dead, even by him doth this man stand here before you whole. This is the stone which was set at nought of you builders, which is become the head of the corner. Neither is there salvation in any other: for there is none other name under heaven given among men, whereby we must be saved.” (Acts 4: 10-12) 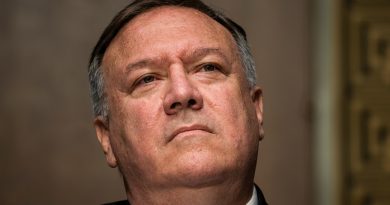 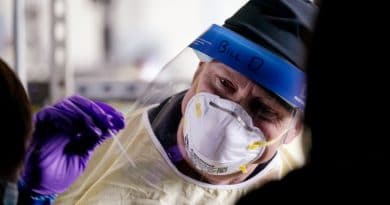 COVID-19 deaths are rising in the US, as feared by experts | US & Canada