MILAN, Italy — “I don’t think that competition in the future of luxury production will be based on price; I believe competition will be based on social and environmental consciousness,” said Carlo Capasa, chairman of the Camera Nazionale della Moda Italiana (CNMI), in an exclusive interview with BoF the morning the CNMI launched its social sustainability report and survey on fair wage practices in the Italian luxury supply chain.

The goal of the survey was, in the words of Capasa, “to get an accurate picture” of wage practices in the world’s largest and most established luxury manufacturing and supply chain — and to create a roadmap to drive positive change and the adoption of best employment practices.

“We can support the industry in adopting and implementing some basic principles into their company cultures. The initiative is the first step and aimed at making wage practices progressively improve along supply chains, and at ensuring the coherence needed when it comes to wages,” he continued.

The survey and resulting materials are the latest milestone in executing the ambitious roadmap the CNMI launched in 2011 to work towards a more sustainable Italian fashion industry. Previously, the organisation has released industry materials and hosted workshops on petrochemical use and initiatives to drive diverse representation in Italy’s luxury and fashion workforces.

Acting upon the information shared by the CNMI’s Commission on Social Sustainability, the Fair Wage Network visited 45 suppliers and interviewed over 1,100 employees, representing approximately 20 percent of the total labour force in the surveyed businesses.

Suppliers were selected to be representative of not only the differing geographic regions of Italy, but also the regional specialisations in manufacturing specific products, and the significant variations in size of supplier — ranging from factories with employees that number in the hundreds to much smaller, family-run enterprises.

“We needed to understand what is going on outside of vertically integrated factories owned by luxury brands, where working conditions and wage practices are of the highest quality. What is happening in the sub suppliers? It is challenging to control the situation of the workers there,” explains Capasa.

This [roadmap] will enable us to create long-term value in our sector.

However, despite the fragmented nature of the luxury supply chain in Italy, “generally speaking, the performance was positive,” explains Daniel Vaughan-Whitehead, co-founder of Fair Wage Network and professor of governance in global supply chain at Sciences Po Paris and the University of Geneva. “We provided a score for each of the companies surveyed along each of the 12 elements of a fair wage practice (click here to discover the 12 elements) and 25 percent of the suppliers surveyed were awarded certificates of excellence.”

Italy does however benefit from an idiosyncratic approach to calculating minimum wages, which is conducive to the payment of higher wages that reflect the cost of living.

“In the Italian system, there is no law stating a minimum wage. The level of fair wage is fixed by collective bargaining between trade unions and the government enshrined by Article 36, which states that workers have a right to a wage that is proportionate to the quality and quantity of their work, which must be capable of providing a dignified life for them and their family,” explains Marco Marazza, partner at Marazza & Associati Law Firm and Professor of Labour Law at Catholic University of Milan.

“The collective agreement [system] ensures not just a minimum wage but a proper, fair wage. Such a commitment promotes social equality and equity across the luxury system. Luxury is now at the front of the battle for a proper living wage,” he continues.

Many enterprises consider wages solely as a cost, but they should consider them as an investment in the quality of their human resources.

ss wage inequality than static laws. Due to its inclusion in a directive from the commission, collective bargaining is intended to be adopted by the EU-27 nation states, including other significant manufacturing hubs such as France and Portugal.

“The overview [from the survey results] is the first important step. It enables a monitoring process at an enterprise level to ensure wages do not fall below the necessary thresholds required by those employed to live a dignified life, in accordance with Article 36 of the Italian constitutional charter,” says Vaughan-Whitehead. 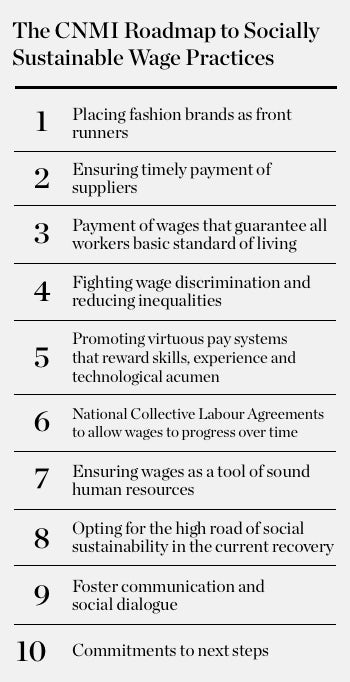 Businesses surveyed towards better practice in these areas, and share information for suppliers outside of the project to begin their own journeys towards socially sustainable wages, the CNMI created a 10 stage roadmap to follow, in partnership with the Fair Wage Network.

“This roadmap helps identify what companies need to do to adopt best practices. The survey results enable and inform our next steps: workshops, education and the expansion of the project,” explains Capasa.

Indeed, the survey and report identified some areas where improvement can be made, specifically, workers did not always know what the contractual minimum wage was for their specific enterprise and overtime was not always paid in a timely manner.

One consideration that is likely to become increasingly relevant due to the global disruption and recession forecast by analysts, are fit for purpose wage adjustment processes. Wage adjustment mechanisms at enterprise level can ensure that wages are adjusted to reflect inflation-driven price increases.

“Many enterprises consider wages solely as a cost, but they should consider them as an investment in the quality of their human resources. The notion of a fair wage is, I believe, consistent with the luxury sector. The luxury sector seeks out the highest quality materials and production methods and should also ensure it has access to the highest quality human capital,” says Vaughan-Whitehead.

“This will enable us to create long-term value in our sector,” says Capasa. “We want to arrive to the point where the Italian supply chain is the best supply chain in the world when it comes to fair wage practices, and indeed other elements of sustainability. Italy represents probably 70 percent of the high-level or high-quality production, which benefits our fashion economy, but also creates responsibility. We have to prove to the world that when you do high-quality manufacturing, that includes a high level of consideration and respect for the workers involved. I think this project will have a strong impact.”

However, Capasa and the CNMI have become advocates for reform not only in Italy, but in the global fashion and luxury industries. “More than anything we want to become an example for the world,” he says. “When you actually do something like this project, other people can’t claim it did not happen.”

“If increased levels of transparency increase Italy’s competitive advantage as a manufacturing centre, it would be further proof that if you want to grow your fashion business in the future, you have to be transparent. Hopefully, other countries would understand that those standards will begin to be expected anywhere in the world. This is opening a door, or maybe even just a window, to something that we need to improve in the world,” he concludes.

This is a sponsored feature paid for by Camera Nazionale della Moda Italiana as part of a BoF partnership. 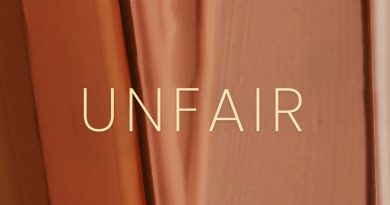