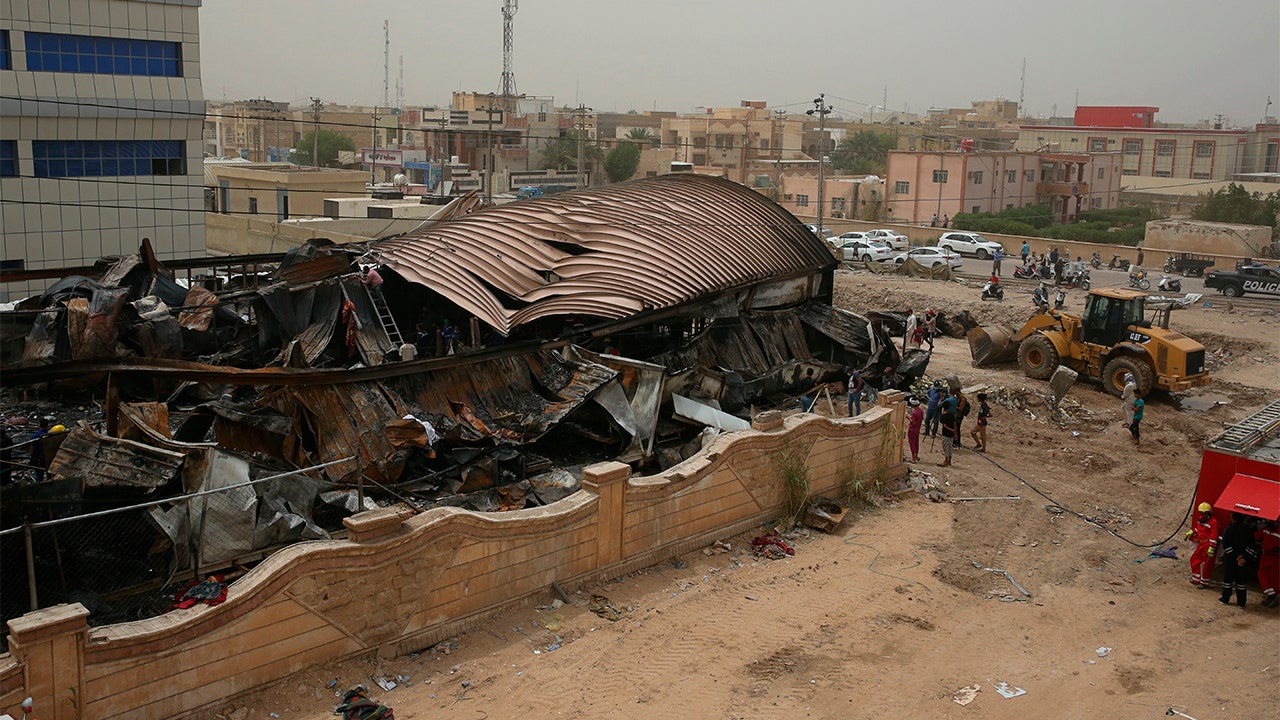 The death toll from a fire that swept through a hospital coronavirus ward climbed to 92 on Tuesday, Iraq’s state news agency reported, as anguished relatives buried their loved ones and lashed out at the government over the country’s second such disaster in less than three months.

Health officials said scores of others were injured in the blaze that erupted Monday at al-Hussein Teaching Hospital in Nasiriyah.

The tragedy cast a spotlight on what many have decried as widespread negligence and mismanagement in Iraq’s hospitals after decades of war and sanctions.

Prime Minister Mustafa al-Kadhimi convened an emergency meeting and ordered the suspension and arrest of the health director in Dhi Qar provice, the hospital director and the city’s civil defense chief. The government also launched an investigation.

The prime minister called the catastrophe “a deep wound in the consciousness of all Iraqis.”

Rescuers and civilians look for bodies after a catastrophic blaze erupted Monday at a coronavirus hospital ward in the al-Hussein Teaching Hospital, in Nasiriyah, Iraq, Tuesday, July 13, 2021.
(AP Photo/Khalid Mohammed)

Two Iraqi health officials, speaking on condition of anonymity in line with regulations, disputed the reported death toll, saying 88 had been killed.

Authorities at one point said the fire was caused by a short circuit. Another official said the blaze erupted when an oxygen cylinder exploded. The officials were not authorized to talk to the news media and spoke on condition of anonymity.

In April, at least 82 people — many of them coronavirus patients or their relatives — were killed in a fire at a Baghdad hospital that broke out when an oxygen tank exploded. Iraq’s health minister resigned over the disaster.

In the holy city of Najaf, the dead from Nasiriyah were laid to rest. Mourning families stood over the coffins at a mosque to say one last prayer.

Their tears were tinged with anger, with some saying the disaster could have been prevented. They blamed both the provincial government and the central government in Baghdad.

Ahmed Resan, who witnessed the blaze, said it began with smoke. “But everyone ran away — the workers and even the police. A few minutes later there was an explosion,” he said. He said firefighters arrived an hour later.

“The whole state system has collapsed, and who paid the price? The people inside here. These people have paid the price,” Haidar al-Askari seethed at the scene.

Overnight, firefighters and rescuers — many holding flashlights and using blankets to smother small fires — searched through the ward. As dawn broke, bodies covered with sheets could be seen laid out on the ground outside the hospital. Distraught relatives searched for traces of their loved ones amid charred blankets and belongings.

Ali Khalid, 20, a volunteer who dashed to the scene, said he found the bodies of two young girls locked in embrace.

“How terrified they must have been, they died hugging each other,” he said.

CORONAVIRUS: WHAT YOU NEED TO KNOW

Rescuers and civilians look for bodies after a catastrophic blaze erupted Monday at a coronavirus hospital ward in the al-Hussein Teaching Hospital, in Nasiriyah, Iraq, Tuesday, July 13, 2021.
(AP Photo/Khalid Mohammed)

Ali Karar, a cleaner at the hospital, said the ward had only four fire extinguishers and no fire alarm system. Firetrucks ran out of water quickly, he said.

Doctors have long complained of lax safety at Iraq’s hospitals, especially around oxygen cylinders, and have described the institutions as ticking bombs.

Mac Skelton, a medical sociologist focused on Iraq, said chaos and neglect in Iraq’s public hospitals since the U.S.-led invasion in 2003 have given rise to “toxic” distrust between patients and doctors.

Doctors in COVID-19 wards often say they avoid confronting patients’ families who are mishandling oxygen tanks, for fear they will react violently, he said. “But families say that they have legitimate fears about leaving the lives of their vulnerable loved ones up to medical staff that they regard as under-resourced, overburdened and disinterested.”

Iraq is in the midst of another severe COVID-19 surge. New cases per day peaked last week at 9,000. Iraq’s war-crippled health system has struggled to contain the virus. The country has recorded over 17,000 deaths and 1.4 million confirmed cases.

Fear and widespread mistrust of the public health sector have kept many from seeking hospital care.

Ali Abbas Salman, who rushed to evacuate his COVID-19-stricken father from the building after the fire broke out, swore he wouldn’t take the older man back to a hospital.

“He wants me to take him home. He said, `It’s better to die of coronavirus than being burned alive,’” Salman said.

The disaster is likely to stoke public discontent toward Iraq’s political establishment ahead of October elections, said Marsin Alshammary, an Iraq specialist at the Brookings Institution. Nasiriyah has been at the heart of past revolutions in Iraq.

“Given this entire atmosphere built around the city,” she said, “you can imagine that something as tragic as this event, where people who were already vulnerable were killed in a needless accident, will create more public anger.”

Caste and the Indian Army