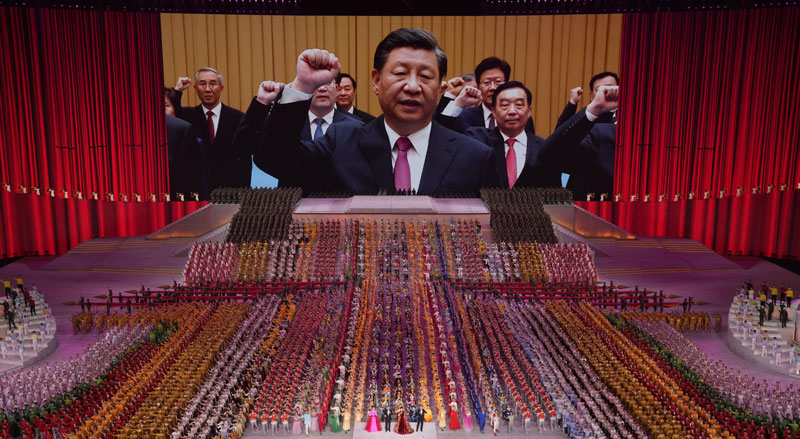 
Communist China has been quietly embracing modern technology and harnessing such advancements in an effort to wage a digital war against the West.

Through drone tech, telecommunications companies such as Huawei, and hugely popular apps like TikTok, the Chinese Communist Party (CCP) has extended its reach far beyond the people of China.

While, historically, the Chinese government has long criticized the U.S. as imperialistic for acting as the world’s policeman, the CCP’s ambitions have grown to the point where Beijing is forming a Digital People’s Liberation Army to attack the American homeland.

Sun Tzu, the revered Chinese military strategist and author of The Art of War, once said, “It is never beneficial to a nation to have a military operation continue for a long time.”

As opposed to storming a beachhead in a distant land, China prefers to suffocate an enemy without firing a shot.

China arguably boasts the world’s largest naval fleet, though they have only one overseas naval base.

Meanwhile, the U.S. maintains hundreds of overseas military bases, including many naval bases.

For Communist China, the strategy against the West relies on technology, not troops.

These behemoths are a blueprint for how the CCP integrates its civilian, government, and military apparatuses for purposes of espionage.

For instance, Huawei CEO Ren Zhengfei is a member of the Communist Party and served in the Chinese military. Huawei received $75 billion of government support to expand its global operations selling hardware laced with “cybersecurity risks and vulnerabilities” that allow China a backdoor into networks relying on Huawei equipment.

The company has been on a U.S. sanctions list since 2019. Recently, the FBI warned that Huawei equipment atop cell towers in the Midwest was capable of intercepting and disrupting U.S. nuclear arsenal communications. The CCP is already on American soil monitoring our most sensitive defense outposts, but that’s just the beginning.

DJI is the world’s largest civilian drone manufacturer and counts Beijing as a direct investor.

The Department of Defense maintains that DJI drones potentially threaten national security, and efforts have been made to restrict the use of DJI drones by government agencies with various levels of success.

Yet, its drones are still used by hundreds of state and local police departments and the federal government who justify doing so because the equipment is cheap.

TikTok has approximately 80 million users in the U.S., the majority of whom are between the ages of 10 and 29.

The information can be aggregated using artificial intelligence technologies to develop sophisticated user profiles exposing individuals to blackmail and coercion.

The app is a technological honey trap, efficiently doing the work of a million Beijing spies.

The Chinese Communist Party is waging unrestricted warfare on the U.S.

According to retired Brigadier General Robert Spalding in “War Without Rules,” this involves a fusion of military and non-military tactics designed to attack our economic, social, and political systems.

Their approach is predicated on a mindset of encirclement etched into the Chinese psyche for generations by the ancient game Go, according to Henry Kissinger.

While Kissinger missed the mark on China’s intent, his assessment of their strategic thinking is accurate.

China subtly encircles enemies and lashes out if threatened with the same.

This may explain the CCP forces crossing the Yalu River to ambush U.S. forces during the Korean War or why PLA troops killed 20 Indian soldiers in a western Himalaya border dispute in June 2020.

Technology has accelerated the CCP’s ambition to supplant the U.S. as the world’s leading superpower.

While Chinese strategists have long viewed war as a resource drain, subsidized technology acts as a 21st-century digital PLA that is easily sent abroad and highly effective.

Huawei provides the ears, DJI the eyes, and TikTok the human data to triangulate intelligence about our strengths and vulnerabilities.

China is already at war with America, and we’re sinking our own ship.