The coronavirus pandemic had a devastating effect on Italy in the spring – now, as the country fights back the virus’s second wave, thousands of small villages are “fighting to stay alive”, Lorenzo Tondo writes.

Set among the forests at the foot of Mount Kalfa, Roccafiorita is the smallest village in southern Italy. The average age of its 187 inhabitants is over 60. If Covid were to spread among the population, the village could disappear.

“I’m worried,” 93-year-old Salvatore Occhino said. “If Covid strikes hard, there will be no one left in Roccafiorita. My heart cries out when I think of all the sacrifices we’ve made to keep this village alive. Now we can only place ourselves in the Lord’s hands.”

Melbourne’s “ring of steel”, which kept the city separate from the rest of Victoria, is set to lift at 11.59pm on Sunday.

Regional areas had been off-limits to Melburnians for months as the city lagged behind in its second wave fight with Covid-19, but the border will now be opened after the city recorded nine consecutive days without a new case.

“We know that so many people have missed those that they love the most, those who they need to see, been desperately keen to see, for such a long period of time,” Premier Daniel Andrews told reporters.

Measures will be relaxed, including:

A former sports minister has urged the UK government to soften its ban on outdoor sports, saying the current rules do not make sense.

Under national lockdown restrictions for England, outdoor sports including children’s sports outside of school settings have been shut down until 2 December.

On Sunday Tracey Crouch, a former Conservative frontbencher, called for compromises on the policy.

The MP told BBC Radio 4’s the Westminster Hour: “I appreciate that some might think it’s just a month, but actually a month is a long time when for many people, sport is as much about therapy as it is about their own physical health.

“And for youngsters, a month is an exceptionally long time. There certainly could have been compromises made. There’s no reason why you can’t just suspend competition but allow for training to continue.

“Then there are socially distanced sports in themselves. To me that doesn’t make any sense.”

New York governor Andrew Cuomo has said he thinks Joe Biden’s election will be a turning point in America’s battle against Covid-19.

“I think the political pressure of denying Covid is gone. I think you’ll see scientists speak with unmuzzled voice now. And I think the numbers are going to go up and Americans are going to get how serious this is.”

The second wave of the Covid-19 pandemic in the UK is bringing a new tide of homelessness to a small square outside Charing Cross police station in London.

“There’s a lot of new faces,” said Jas Bhogal, a volunteer, while he handed out free gloves, hats and masks to a long queue of rough sleepers as temperatures dropped last week.

“Employees that worked in the hospitality businesses, those that didn’t get furloughed, ended up on the street and came to use this service,” he said. The demand is so high that three other charity food drops are operating at the same time as Bhogal’s Sikh Welfare and Awareness Team.

You can read Robert Booth’s report about the pandemic’s impact on homelessness here.

Four people were arrested and a number of officers were injured at Manchester’s anti-lockdown protest, Greater Manchester Police have said in a statement where they strongly condemned the gathering of more than 600 demonstrators.

Assistant chief constable Mabs Hussain said: “Today, Greater Manchester police responded to a large gathering in Piccadilly Gardens, Manchester city centre. At the peak of the gathering, in excess of 600 people were in attendance.

“I would like to use this opportunity to publicly condemn this gathering. Both the organisers and attendees were irresponsible – increasing demand on police who are also responding to calls regarding serious incidents and people who are in immediate danger across Greater Manchester.

“Before and during this gathering, officers followed guidance to engage with the organiser and attendees, explain the restrictions and encourage compliance. Unfortunately, the encouragement was ignored, which resulted in officers progressing to enforcement.”

Officers arrested four people on suspicion of public order offences and issued 24 £200 fixed penalty notices at the protest, he said, adding that police are looking to issue an FPN to the organiser.

Police have learned that one group travelled to the protest from Cumbria via coach, Hussain said, explaining that the driver and coach company have since been reported to the regulator.

He added: “Whilst responding to this gathering, a number of officers were injured. This is unacceptable behaviour towards officers who were simply doing their job and protecting people. Investigators will now work to identify those responsible and ensure they face justice.

“I would also like to remind members of the public that these restrictions are to control the spread of Covid-19 and protect everyone – including you and your loved ones as well as the NHS. I encourage you to do your bit to fight the virus by complying with the restrictions and staying at home.”

It follows a record daily increase on Saturday, when a staggering 86,852 cases were logged.

The health ministry also announced 271 more coronavirus patients had died in the country’s hospitals, down from 306 on Saturday.

Greece has reported a record daily rise of 35 coronavirus deaths, and 1,914 new cases of the virus. The authorities announced 34 deaths on Saturday.

It brings the country’s coronavirus death toll to 734 and the total number of confirmed cases to 56,698.

The AP bureau chief for south-east Europe has this breakdown of the cases:

The US Centers for Disease Control and Prevention (CDC) reported a further 93,811 coronavirus cases on Sunday, bringing the total to 9,808,411.

The CDC figures do not necessarily reflect cases reported by individual states.

It follows a string of record figures, with the country tallying more than 100,000 new cases for four consecutive days. 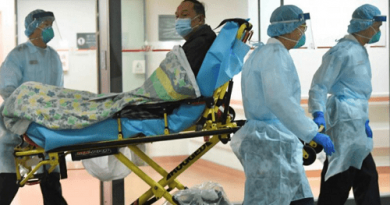 The Global Race for COVID Vaccine