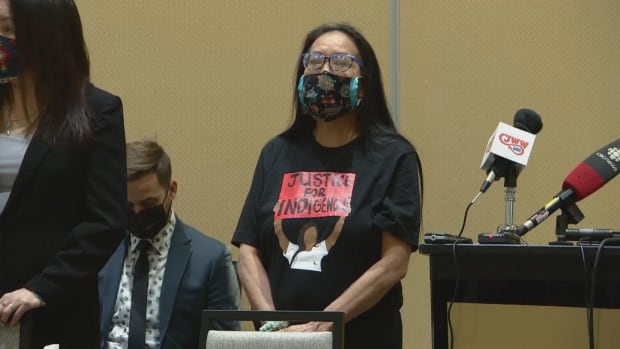 The family of Colten Boushie, the young Indigenous man from Saskatchewan whose shooting death was investigated by the RCMP in 2016, is speaking out following the release of an independent report that found Canada’s national police force racially discriminated against Boushie’s mother.

RCMP Commissioner Brenda Lucki has accepted the finding of racial discrimination along with many others detailing numerous police missteps during the investigation, including the mishandling of witnesses and evidence and the insensitive process of notifying Debbie Baptiste of her son’s death.

“I did not deserve to be treated the way I was treated,” Baptiste said at a news conference hosted by the family Monday morning. She said the family was not treated like human beings.

The RCMP watchdog, the Civilian Review and Complaints Commission (CRCC), also concluded that media releases sent by police early in the investigation caused the family further anguish by fuelling perceptions that Boushie’s death at the hands of Saskatchewan farmer Gerald Stanley was deserved.

Baptiste said the experience did much hurt to the family, but they’ve been able to overcome it thanks to the support of Indigenous people.

“We fought for this justice and we’ll continue fighting,” Baptiste said of the CRCC’s findings.

WATCH / Colten Boushie’s mother: “He was a human being.”

The RCMP’s watchdog says Canada’s national police force racially discriminated against the mother of Colten Boushie during its investigation of the Indigenous man’s shooting death in 2016. Debbie Baptiste responded to the scathing report in a news conference. 1:34

Boushie, 22, was shot and killed after he and four others from the Red Pheasant Cree Nation in Saskatchewan drove onto Stanley’s property near Biggar, Sask., on Aug. 9, 2016.

An altercation occurred between the people in the SUV and Stanley and his son, ending with Stanley fatally shooting Boushie.

In February 2018, a jury found Stanley, 56, not guilty of second-degree murder or manslaughter.

‘They had the nerve to smell her breath’

Baptiste made the remarks in Saskatoon Monday in response to the findings, which the CRCC published online earlier in the morning.

In a statement Saturday, the Saskatchewan RCMP said the CRCC’s findings and recommendations will help increase the public’s confidence in the police force, while a union representing some RCMP members, the National Police Federation, said the CRCC’s work was biased against police and omitted some crucial facts.

The RCMP in Ottawa have said they would respond once the CRCC officially releases its findings Monday.

The CRCC’s reports, which generally found the investigation to be professional and reasonable, focused in part on events soon after Boushie was shot.

Seven officers visited Baptiste’s home on the Red Pheasant reserve that night. They were there to break the news of Boushie’s death and search the home for a witness they believed might have a gun.

While finding no signs of discrimination in officers’ approach and search of the home, the CRCC found evidence of discrimination during the next-of-kin notification process when it came to “the police’s conduct towards Ms. Baptiste with respect to her sobriety and her credibility.” The family had accused one officer of telling the grieving Baptiste to “get it together” and asking if she had been drinking.

“One or more RCMP members smelled her breath,” the commission wrote.

Eleanore Sunchild, a lawyer representing the family, told the news conference that was not acceptable.

“When she fell to the floor, after they told her her son was dead, they had the nerve to smell her breath,” Sunchild said, summarizing the CRCC’s findings.

Baptiste told officers Boushie’s dinner was waiting in the microwave, the CRCC wrote.

“Then they even checked the microwave where she had put her son’s dinner to make sure that she was telling the truth,” Sunchild said.

“If that doesn’t speak of discrimination and racism, I don’t know what does.”

The RCMP’s watchdog says Canada’s national police force racially discriminated against the mother of Colten Boushie during their investigation of the Indigenous man’s shooting death in 2016 — a finding accepted by RCMP Commissioner Brenda Lucki. The Boushie family and Indigenous leaders held a news conference following the Civilian Review and Complaints Commission report. 0:58

The CRCC also found that officers acted on insufficient information when they decided the level of risk justified surrounding Baptiste’s house. The RCMP also did not have a warrant to search the home.

RCMP Commission Brenda Lucki defended the tactical approach, citing fears about officer safety at the time, but agreed the resulting next-of-kin notification process and the search of the home were insensitive and lacked good judgment.

The CRCC also examined the initial media releases the Saskatchewan RCMP issued about Boushie’s death. It found they focused disproportionately on property offences linked to Boushie’s friends, which cast Boushie in a negative light instead of focusing on the investigation of his killing, and fuelled online vitriol directed at the family.

“Ms. Baptiste’s sons William and Jace spoke to their last name being ‘ruined’ and associated with ‘thieves,’ as well as hateful messages and images about their name on social media,” the commission wrote.

“[They] also stated that the media release said more than what the police had told the family and that left them powerless to defend Colten’s name.”

The CRCC made 47 findings related to the investigation, 25 of which found no errors or misconduct, including the questioning of Gerald Stanley.

The commission recommended that a change already made by the Saskatchewan RCMP — having Indigenous officers review media releases discussing serious incidents involving Indigenous people — be made nationwide.

“There are lessons to be learned from how these media releases were written and perceived,” she wrote in response to the CRCC.