“Not everyone who says unto me, Lord, Lord, shall enter into the kingdom of heaven; but he that does the will of my Father which is in heaven.

For the past two decades, Nigerians, particularly Christians have had to put up with the antics of men unction to carry on the mandate of Jesus Christ across the world. Although, the nation is not short of Pastors who have distinguished themselves in their callings, this piece focuses on Men of God, that have in the past few years, courted controversies with their flirtation with political prophecies.

The word of God is settled, exact and firm for the Holy Book in Proverbs 30: 5-6 says “Every word of God is pure. He is a shield to those who put their trust in Him. Do not add to his words, lest he rebuke you and you be found a liar.”

Across the world, preachers are highly respected for in them, the people see ambassadors of God on earth. They are expected to speak truth regardless of the circumstance which is why in moment of crisis when citizens are afraid or too broken to speak up; the vast majority look up to Men of God to speak on their behalf.

One of the world’s most vocal civil rights activists, Martin Luther King Jr. started off as a Baptist Pastor until activism took the better part of him in the mid-50s. Until his brutal assassination on April 4, 1968, Martin Luther King Jr. was a turn in the flesh of successive American governments for their social segregation against the blacks. From King, Americans expected true utterances, messages of hope anchored on the undiluted word of God.

In Nigeria and in many other African countries, political prophecies many of which have turned up as outright falsehood are gradually becoming a way of life. One of the country’s most eloquent Pastors, Tunde Bakare, founder of the Latter Rain Assembly, struck fear into the psyche of former Head of State, Chief Olusegun Obasanjo when ahead of his inauguration as democratically elected President of Nigeria in 1999; he prophesied an awaiting doom of Egyptian proportion.

“Obasanjo is not your messiah. He is King Agag and the prophetic axe will come upon his head before May 29, 1999,” Bakare said, only for the civil- war hero to in addition to a seamless inauguration, also won a second term in office in 2003. Bakare’s prophesy failed to materialize but the world moved on. No questions were put directly to him apart from individual whispers of “Can God lie?” among those bold enough to question the divinity of that prophesy.

Despite the fruitlessness of that first prophesy, Bakare in a video that went viral two years ago told who ever cared to listen that a successor to President Buhari has been named by no one than God, creator of heaven and earth.

Addressing a capacity-filled auditorium in Lagos, the lawyer-turned clergy said, “I will succeed Buhari as President of Nigeria, nothing can change it. I am number 16, Buhari is number 15. I never said it to you before. I am saying it now and nothing can change it. In the name of Jesus, he (Buhari) is number 15, I am number 16. To this end was I born and for this purpose came I into the world. I have prepared you for this for more than 30 years.” At least, we can wait for this one. 2023 is almost here!

On his part, another clergy man blessed with the gift of the garb, Pastor Chris Okotie of the Household of God Church had in different election cycles vied for the Presidency only to fail to garner sufficient votes for a tenancy in Aso Rock, even though he told Nigerians he heard from God that victory would be his. In 2003 and 2007, he contested the plum seat on the platform of Justice Party and repeated same in 2011 on the platform of Fresh Democratic Party, FDP.

Perhaps, no time had pastors in the land struggled for the crown of the most authentic political seer than the recent United States of America Presidential election won by Democratic Party candidate, Mr. Joe Biden.

Incumbent President, Donald Trump had in the years leading to the polls, battled scores of opposition given the unbridled use of his tongue in many fora as Commander-in-Chief. Seen largely as a hater of black people; Trump in 2016 was quoted by the then Democratic Party Presidential candidate, Hillary Clinton to have referred to some women as “pigs, slogs and dogs.” Remember his shithole comment? All these could have turned many a voter away from the Trump’s ship.

But for televangelist and Founder of Christ Embassy, Pastor Chris Oyakhilome, haters of Donald Trump are nothing but haters of Christians across the globe.

”There are those who think that Trump, the President of the United States is hated by many Americans; he is not hated by many Americans, I want to tell you the truth. Trump is not the problem, they don’t hate Trump. They hate those that Trump seems to support. They are angry at Trump for supporting Christians, you better know it. So the real ones they hate are you who are Christians. That is what the hatred of Trump is all about.

“Before he started giving his voice in support of Christians and in support of Israel, he was the friend of the West. Don’t forget. He was their darling, they loved him. Because he doesn’t come from their sponsorship, and they didn’t expect him to become President, they blamed the evangelicals, they blamed the Christians for voting him into office,” he said in a viral video that elicited diverse reactions.

With barely a handful of weeks to the US polls; Taribo West joined the Trump-must-win band of political priests who unlike the rest, saw the businessman-turned politician as the man destined by God to lead the world most powerful democracy beyond 2021.

But unlike others, West, the former FC Auxerre, Inter Milan, Ac Milan and Derby County Centre Back was furious with the handlers of his church, Shelter in the Storm Ministry’s social media platforms. According to the ex- Super Eagles defender, he had made some prophesies which turned out true in the past but were not made public.

Thus at a church service with him presiding, he said: ”There are a lot God vomits (what a word!) out of this Ministry but because of our social media and the way we have been working; nothing is coming out. Before the election in Edo, I said Obaseki would win. Is that true? Did he win? Nobody said it anywhere, nobody bring (sic) me out anywhere, nobody quote (sic) it anywhere. I said it here before the election. I also said in Ondo election that Akeredolu would win. Is that true? Did he win?

“Now, I want you to shoot this out, the way I want it. Donald Trump will win the election with a slight split edge over Joe Biden. So, quote me and I want it to be out before time.” With a shout of YES greeting every question he asked his parishioners, West directed the church’s social media handlers to hit the ground running, first with his prophesy of a Trump’s victory. It is not clear, if he has had the time to reflect on his declaration now that Trump appears to be on his way out of the White House.

If West’s sojourn in political prophesy ended in ignominy, that of Prophet (Dr.) David Kingleo Elijah is even more difficult to capture in words.

Prophet Elijah who calls the shot at the Glorious Mount of Possibility Church told his members that an American politician would take his life for failing to support Trump, whom he described as God’s chosen to lead the United States beyond a single term.

Hear him: “If care is not taken and prayer is not made-this prophesy has two ways: If proper care is taken, and prayer is made, and the person involved repents, it will not happen. But if he doesn’t repent, I see a politician in America because of Donald Trump, committing suicide. I said a politician in America because of Donald Trump, will commit suicide because Donald Trump is going to win again. Any man God is behind, you can condemn the man but you can never condemn the God behind him. Any man God says go and he’s going, no matter what you do, you cannot stop him.

“So, let them know they should pray and repent. If they don’t repent, I see somebody in American politics commit suicide and die because of Donald Trump.

Commit suicide and die? That’s what Prophet Elijah told his flocks. It would interest the world to hear from this unique “Prophet” if anyone has ever committed suicide and lived thereafter. So long for religion in a world of little spiritual revival.

CAN Directs Churches to End Crossover Services by 11pm 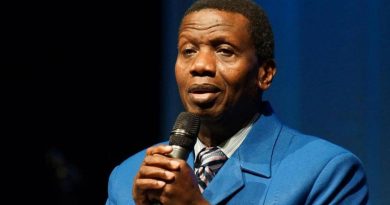 Feminists attack Adeboye over advice for women to be submissive