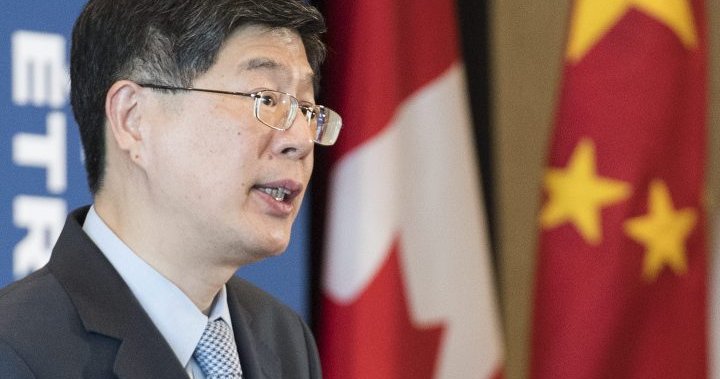 China’s envoy to Canada is telling Canadian parliamentarians to butt out of his country’s internal affairs through their pending vote on declaring a genocide against ethnic Muslim Uighurs in its Xinjiang province.

Cong Peiwu, the Chinese ambassador to Canada, reiterated his government’s view that there is no mistreatment of Uighurs, labelling accusations from the United Nations and others that millions of people in detention camps are being subjected to forced labour and sterilization as unfounded China bashing.

The Conservatives tabled a motion in Parliament this past week calling on Canada to formally declare crimes against Uighur Muslims in China a genocide. That motion may come to a non-binding vote as early as Monday.

“We firmly oppose that because it runs counter to the facts. And it’s like, you know, interfering in our domestic affairs,” Cong told The Canadian Press in an interview Saturday. “There’s nothing like genocide happening in Xinjiang at all.”

The Chinese embassy in Ottawa proactively offered the interview on Saturday ahead of the scheduled vote.

Conservative Leader Erin O’Toole has said the motion and subsequent vote is needed to send a “clear and unequivocal signal that we will stand up for human rights and the dignity of human rights, even if it means sacrificing some economic opportunity.”

Prime Minister Justin Trudeau has stopped short of agreeing with American officials, human rights advocates and legal scholars that the violations amount to a genocide, saying the term is a loaded one that has to be used carefully.

“There is no question there have been tremendous human rights abuses coming out of Xinjiang,” Trudeau said earlier this week, adding that use of the word must be “properly justified and demonstrated so as not to weaken the application of ‘genocide’ in situations in the past.”

0:41
O’Toole calls on Trudeau government to declare China’s persecution of Uighurs a genocide

Cong dismissed the widespread allegations against China over the treatment of Uighurs and reiterated his government’s view that it has acted to stamp out terrorist activity in the province .

He said the region’s population grew by 25 per cent between 2010 and 2018, a figure he said undercuts accusations of forced sterilization and genocide. He said Uighurs are receiving vocational and language training so they can prosper in Chinese society.

He also disputed allegations of religious persecution, saying Uighurs are free to worship in mosques.

“I think we respect your values. But I think our core values should be: respect facts. And to stop spreading disinformation or even rumors,” said Cong.

Cleverly said China has detained 1.8 million people in Xinjiang without trial and is not living up to its obligations under international human rights law or its Security Council requirement that counter-terrorism measures comply with those obligations.

Bob Rae, Canada’s ambassador to the United Nations, called on the UN in November to investigate whether China’s persecution of the Uighurs constitutes genocide.

A Canadian parliamentary subcommittee concluded in an October report that China’s treatment of Uighurs is a genocide, a finding China rejected as baseless.

3:21
Trudeau asked about use of ‘genocide’ to describe China’s actions against Uighur minority

Trudeau and his fellow G7 leaders discussed the accusations against China over the treatment of its Uighur minority during their virtual summit on Friday.

Trudeau said they had “taken careful note of conclusions drawn by experts around the world, including findings of crimes against humanity and genocide.”

Cong also denounced Canada’s leadership of a 58-country international declaration against arbitrary detention amid the 800-plus days that Canadians Michael Kovrig and Michael Spavor have been in prison in China.

Canadian officials took pains not to name China as the target of the declaration, saying it was trying to start a global movement against a coercive practice that several countries are now using that must be stopped through an attempt to internationally shame its practitioners.

Cong says if Canada really wants to live up to the spirit of that declaration, it should release Huawei executive Meng Wanzhou, who the RCMP arrested on an American extradition warrant. He contends her prosecution is unlawful and her continued detention is also arbitrary.

Canada and its allies say Kovrig and Spavor are being detained in retaliation for Meng’s arrest and that national security charges levelled by China against them are bogus.

“We must point out that Mme. Meng Wanzhou has been arbitrarily detained for over two years, despite the fact that she hasn’t violated any Canadian law. This is the most accurate illustration of arbitrary arrest or detention of foreign nationals,” said Cong.

“So, the declaration looks rather like Canada’s confession in the Meng Wanzhou case.”

— With files from The Associated Press