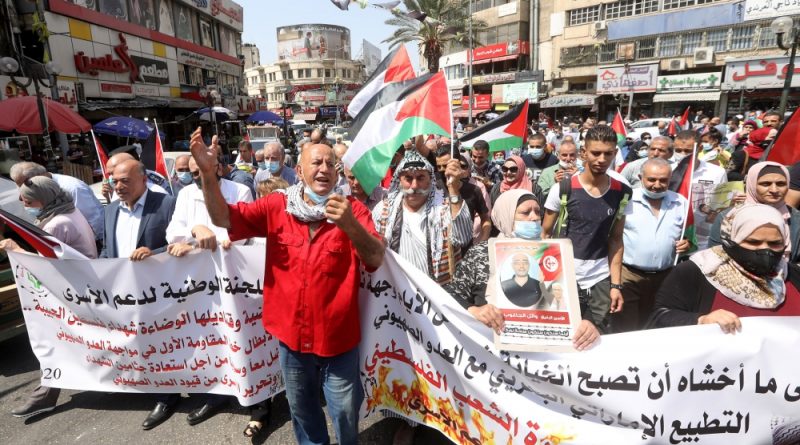 Gaza City – Fatah and Hamas reached a deal on Palestinian elections at the Palestinian Consulate in Istanbul last week, raising hopes the factions can unite after years of animosity as Israel continues to threaten annexation while it normalises relations with Arab nations.

The proposal for parliamentary, presidential and national council elections is set to be discussed among all Palestinian factions in a leadership meeting this week, after which a presidential decree to officially announce election dates is expected.

“The atmosphere domestically is now very accommodating to hold elections. It enjoys national consensus, including from Islamic parties,” Wasel Abu Yousef, a member of the PLO’s Executive Committee and leader of the Palestine Liberation Front, told Al Jazeera.

“The consensus is to conduct elections on the basis of proportional representation and with a time frame of six months. We start from parliamentary elections, then presidential, and national council elections.”

“These are certainly positive steps that should be built upon,” he told Al Jazeera. “We should intensify our efforts to solve all the remaining issues of dispute between the two sides.”

However, Azam explained the Islamic Jihad will only participate in the national council elections that are representative of the diaspora and not connected to peace accords with Israel.

The PA and its legislative council are both products of the Oslo accords between Israel and the PLO, and the Islamic Jihad does not recognise the Oslo agreement.

“Palestinians can only be optimistic towards elections as a pathway to ending the destructive phase to our cause that fragmentation and division produced,” Basim Naim, a senior Hamas leader and former minister of health, told Al Jazeera.

“However, this optimism is very cautious given the amount of obstacles we face on the path to holding elections.”

Naim added: “Palestinians had a bitter experience with 14 years of continuous efforts and meetings in many capitals of the world, where several agreements were reached but haven’t been successfully implemented.”

All interviewees pointed out, however, what is different this time is the unprecedented level of danger the Palestinian cause now faces, especially after the latest normalisation agreements between Israel, the United Arab Emirates (UAE) and Bahrain.

According to the Palestinian Central Elections Commission, 2.2 million Palestinians have the right to vote.

“My optimism regarding the possibility of holding elections this time stems from the fact that Hamas and Fatah have no option this time but elections,” Majida al-Masri, senior leader of the Democratic Front for the Liberation of Palestine, told Al Jazeera.

“It’s a compulsory passage to stand up to the negative developments we’re facing regionally, internationally and on the ground.”

“It’s clear that Arab states have let the Palestinians down, that the current US administration is the most biased towards Israel, and that Israel won’t give the Palestinian authority anything. This has pushed Palestinian leaders to reconsider their internal affairs.”

Abu Yousef explained the tripartite assault on the Palestinian national project – represented in the Trump administration’s so-called Middle East plan, Israel’s accelerated and escalated de facto annexation, and the Israeli-Arab normalisation – has united Palestinians on the ground in the face of those challenges.

However, he added, what is needed next is “genuine institutional and geographic unity between all Palestinian territories that revives the central role of the PLO as the sole representative of the Palestinian people”. This, Abu Yousef argued, can be achieved through elections.

Elections as a pathway to unity

“Elections are the least thing Palestinians should do and the most important and most urgent thing they should do to renew the leadership’s legitimacy and reorganise our internal affairs to engage all Palestinian factions in leading the struggle,” Munib al-Masri, a former PA minister and prominent businessman, told Al Jazeera.

“Elections are the decisive factor on what would happen next, in terms of Palestinian vision and strategy, and in terms of allowing youth to play an important role in shaping their own future.”

Majida said the elections could be a pathway to ending intra-Palestinian division and giving legitimacy to the Palestinian political leadership “in the face of the Israeli colonial project, the Trump deal and the normalisation”.

Naim said the elections revive the energy of the Palestinian people in the struggle for their rights.

However, he cautioned “some degree of unity and consensus on the general vision should precede those elections” to prevent further division.

While Palestinian leaders are cautiously optimistic about elections’ potential, there is caution towards the likely obstacles that may derail the latest progress.

All interviewees saw Israel as the main impediment to successfully conducting fair-and-free votes.

“Last year, we agreed on carrying out elections, but Israel sabotaged these plans by preventing us from holding elections in East Jerusalem,” Abu Yousef explained.

Naim concurred saying: “All Palestinians agree that elections cannot be held without Jerusalem.”

“Israel represents the main obstacle to elections, not just in East Jerusalem, but in all occupied territories. It can, for instance, prevent us from reaching Palestinian constituents in areas it considers under its sovereignty in the West Bank,” Majida pointed out.

“Israel is always an obstruction to any measure that would end Palestinian division. It was even a main contributing factor to the division in the first place.”

Naim warned Israel could cite security pretexts to block voting or arrest unfavourable candidates as they have done before.

“Israel won’t be happy about any elections that reflect a positive image of Palestinians as strong believers in democracy and a peaceful transfer of power, as a people who pursue building a better future and take their fate in their own hands,” he said.

The second main challenge is to ensure a positive atmosphere around elections domestically and guarantee respect for the results.

“Division over the last 13 years has left entrenched impacts on society, the national fabric, institutions and values. This is certainly not easy to remove at once,” Majida said.

“But supervision committees can help ensure that these issues won’t become obstacles in the face of elections, for instance, by ensuring an end to all negative media campaigns against the other Palestinian camp.”

Abu Yousef added: “This time we agreed that elections results would be binding for all parties and should be respected fully in order to avoid creating a crisis.”

However, both Naim and Azam argued political consensus is needed before the elections to ensure the aftermath does not replicate the 2006 vote, in which Hamas’s win of the legislative council led to tensions with Fatah and the eventual intra-Palestinian division.

Majida said she sees an opportunity this time in elections because: “The proportional representation law that was agreed upon among all parties creates a pathway to a national consensus government because this law won’t allow replicating previous experiences of allowing any party alone to take over the majority of the legislative council.”

To surmount all obstacles, Palestinians will look to the international community to protect and support the elections.

“The international community should pressure Israel to ensure the success of elections and provide a protective umbrella for us that guarantees a healthy and undisrupted conduct of elections,” Majida added.

But Naim noted the international community could become an obstacle if it imposed conditions to recognise the results of elections.

“The international community contributed to Palestinian division to a dangerous extent. Had Europe and the US recognised the results of the 2006 elections and engaged with the government it produced, we wouldn’t have seen the ensuing results,” he said.

“The international community must officially declare that they support fair and free Palestinian elections, whether politically, technically or financially, and that they are prepared to respect the results of the elections and engage with the Palestinian leadership that elections would produce.”