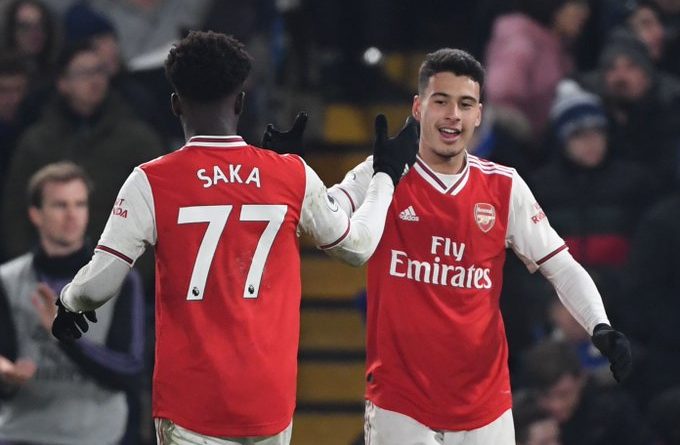 The accolades have kept flowing towards Bukayo Saka following his fine showing in Arsenal’s 2-1 defeat of Bournemouth in an FA Cup tie.

The eighteen-year-old started Monday night’s game at the Vitality Stadium as a left-back but ended it with one goal, an assist and a man-of-the-match award to attract praises from all and sundry.

The Gunners deservedly doubled their advantage just before the half-hour mark with another well-worked goal. It was Saka who laid a perfect cross into the path of 20-year-old Eddie Nketiah, who tucked home from six yards. Surridge grabbed a late consolation goal for the hosts.

But the north London side had done enough to secure their passage into the next round of the competition, with Saka earning the praise of his boss, Mikel Arteta.

The former Arsenal skipper, however, is not the only one who has seen the excellent efforts of the youngster with many fans also taking to Twitter to hail the winger-turned-fullback.

Your £50m fullback is on youtube watching Bukayo Saka skills & moves. Young lad is not even a natural fullback. Lewl.

He has been extremely impressive at Left Back. He keeps improving match but match, what a player ⚡

Bukayo Saka has been directly involved in ten goals in all competitions for Arsenal this season (3 goals & 7 assists) – only Gabriel Martinelli (13) and Pierre-Emerick Aubameyang (17) have been involved in more for the Gunners in 2019-20.

Bukayo Saka has 9 goals and assists in 22 matches this season. He played most of them as a left-back. I don’t think people realise what a massive prospect this kid is. 18 years old only. Straight to the top

From left back he continues to make assists & score goals. When will Arsenal return Bukayo Saka to his original position

Of course the Ozil warriors are unseeing it as no one must call out their hero for his nothingness. Someone should sha tell them Lingard don first am score oo

Bukayo Saka has 3 goals and 8 assists playing most games at left-back. We keep talking about Martinelli, but don’t forget this man! The sky is his limit… Deserves more respect. pic.twitter.com/nwZ29a14q6

Bukayo Saka has 3 goals, 8 assists this season. That’s quite remarkable, even more remarkable when you remember that he’s played as a left back for the most part.

Bukayo Saka has 3 goals and 8 assists playing a lot of a time at left-back. Out of position. We keep talking about Greenwood and Martinelli, as most promising PL talents, but everyone is sleeping on Saka. Deserves more respect. Baller! ⚽️🅰️

Saka has been directly involved in 10 goals in all competitions – only Martinelli (13) and Aubameyang (17) have been involved in more for the north Londoners this season.