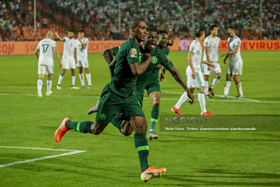 The transfer has sparked a lot of reactions on Twitter, as United fans and admirers tucked in on the microblogging platform to give their thoughts on his move.

The 30-year-old is set to become the first Nigerian-born footballer to play for Manchester United in history, and this has got his compatriots thrilled.

Check out some of their tweets below :

@uchejombo: Once Ighalo gets confirmed… its going to be tough for you to convince me he’s not the best striker in EPL And I will heading his…. ighaloFC. #MUFC Imagine a Nigerian final playing for My Club  (Silent prayer) abeg no fall my hand. #DeadlineDay.

@DrJoeAbah: Like this tweet if you believe in the God of Odion Ighalo. He’s going to Manchester United. No need to retweet…unless the Spirit moves you. Just like.

@officialBovi: Congratulations to Ighalo on being the first Nigerian to play for Man U. I just hate that he will be the first player to have #coronavirus test included in his medical.

@LawrenceOkoroTL: Meet the best striker in the EPL, he plays for Manchester United and his name is Odion Ighalo.
Africa’s greatest and yes he’s from Nigeria. #IghaloFC #MUFC.

@tripleonuigbo3: A prime Drogba was one penalty away from winning Ivory Coast the AFCON, But he sent his penalty to Jupiter…. We definitely won’t say the same about our Ighalo.

@Theakinabimboye: The Odion Ighalo Story From Ajegunle to Manchester United.

@BalthassarG: Today should be declared International Ighalo day, it’s not everyday we see a Nigerian in that Red shirt #Ighalo.

@GodwinOdiko : With our many injury worries (especially with Rashford out), I see no reason why having Ighalo on short-term basis isn’t ideal.

He (Ighalo) is a dangerous finisher on his day. So let’s hope for the best from him.

@official_oreva: Odion jude ighalo is winning the balon d’or before Neymar, Mbappe and Hazard.Don’t @ me #IghaloFC we move.

@iamrahmanosman: Ighalo is breaking the internet in Africa tonight !  You indeed get this kind of blessings if you have an orphanage like he does.