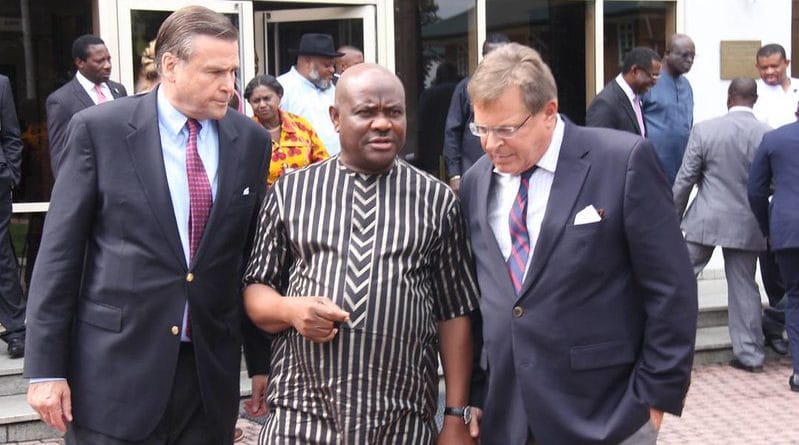 The governor of River state – Nyesom Wike has asked the Chairman of (APC) All Progressive Congress Adams Oshiomhole to immediately resign his position over his failure to allow the swearing-in ceremony of Douye Diri as the governor-elect of Bayelsa state.

In his address to the media on Saturday, Wike vowed that Oshiomhole or the APC would never succeed in their plot to wrestle power from (PDP) in Bayelsa politically. Wike lamented on the state of affairs in the country, pointing out that some people in this government are unstable in words and deeds.

In his words-, “I think the chairman of All Progressive Congress Adams Oshiomhole is not a person to associate with.” Wike further stressed that he would never embrace violence, but what do you do when an armed robber comes to your house to rob? You don’t beg robbers to leave your residence.

Painfully, robbers are not the only people who carter away with people’s property or money. The governor made his point clear that the worst form of robbery is when you hijack and steal the mandate of the people like Oshiomhole has done.

He didn’t go Scot free as he was taught a sweet lesson, and if he tries to steal the people’s mandate, the same people will surely respond. They will continue to oppose your stealing and robbing them of their Mandates.

According to him, because Oshiomhole believes he is among the ruling party, people cannot say do anything. Stealing or robbing is not about going to the bank with a gun but that the worst form of robbery is when you hijack the people’s mandate for selfish gain.

Accusing Adams of always hungry and driven by his survival instinct, the governor stressed that he stopped attending NEC meeting as the Chairman is in the habit of always bashing and ridiculing the formal president Jonathan after earlier hypocritically praising him at Aso villa.

When the former president conducted a free and fair election in Nigeria during his tenure, Adams was singing and shouting his praise all over the country. And one of the main reasons why I don’t care about attending the NEC meeting is simply because of Adams when he was a member.

He enjoys and deliberately defames the man he once praised with his mouth. That was his character, always speaking from both sides of the month, and that’s who Oshiomhole is,” he said. The governor further said that what led to the electoral act where elections have to go through the-supreme court is because of the issue of this man, Adams Oshiomhole.

He cannot practically come out now and say he is innocent on the electoral processes. He knows he can’t. Of course, the assertion that he fought godfathers in his state can be be seen in Edo state, where he is doing everything within his power to make himself the state political godfather. Do you know why he is now fighting Obaseki? Because the man would not take any instruction from him.

Listen, Adams Oshiomhole didn’t practise what he preaches, and Wike made it very clear that he’s allegiance remains with the PDP and that Oshiomhole knows very well that the APC didn’t score up to 25% in his state.

Wike, in his statement, said Oshiomhole has nothing to say about him, and that’s APC is still probing the Chairman on the hospitals he claimed to have belt…” Wike added He should be full of shame because the PDP candidate is now sworn in as the executive governor of Bayelsa state.

You should learn not to say never on what you are not sure. Far it has happened. He should resign his position, and I wonder why he calls me his friend. I am not his friend. He is trying his best now because the governors and other leaders of his party are saying he cannot lead the party.

Adams has failed his party. And he should stop there because the more he didn’t and goes ahead to speak anyhow, he will understand that Rivers is not what to toil with And yes, on the antelope that he calls himself, and calling Wike a tortoise. In response to that, Wike said that Oshiomhole could not compare himself with him (a well-read lawyer).

He publicly stressed that he (Wike) had his first degree in (PS) Political science and secondly went to the Nigerian law school and did very well. Let him (Oshiomhole) tell Nigerians which university and certificate he has.

The Bayelsa people are ready to defend democracy and continue to work hard to do the right things all the time.