The rugby world, lead mostly by Australians and Englishmen, take great joy in labelling New Zealand’s All Blacks chokers for their recent lack of World Cup success. Since the first World Cup, which New Zealand won, the All Black World Cup story has been one of disappointment and heartache for All Black Supporters who are left wondering how a team that is seems to spend the entire three years leading up to a world cup stomping on everyone in site can manage to throw away world cups year after year.

It started in England, where the All Blacks were defeated in the semi-final by Australia. I can remember that year well, Australia beat the All Blacks convincingly at home, then New Zealand managed to retain the Bledislow cup by winning a low scoring game at home. 1-1 all going into the world cup, with Australia looking far more convincing in their win. In the minds of many New Zealanders the All Blacks were the underdogs in that semi-final. Chokers – not here. Much as it pains me to say, beaten by the better team, not just on the day, but of the season.

In South Africa in 1995 the All Blacks played well to dismiss everyone between them on the final. Getting up in the middle of the night New Zealanders were greeted with the news many of their food was suffering from food poisoning prior to their final against the hosts. Still, the game went to extra time, and the All Blacks lost the drop kicking duel. Choking…only on their dinner.

In 1999 the All Blacks went into a semi-final against a French Team described as ‘only there by a fluke of the draw’. On this occasion I was driving the length of the country to see my girlfriend, listening to the radio as the static crackled in and out. New Zealand controlled much of the match, but were blown away in the second half by a period of play that France will produce once a decade. When they are in that mood they are near unstoppable. France went on to show their other side in the final, losing terribly to Australia in an ugly match. The All Blacks were so dejected that they had little heart for their 3rd place playoff with South Africa and finished their worst placing ever at a world cup – 4th. Choking? Maybe so here, certainly they had little answer once the French turned on the magic.

In 2003 the All Blacks had beaten Australia comfortably in the Tri-Nations(In one game very handsomely) and having disposed of South Africa in their Semi-Final were the favourites going into the Semi-Final, against the hosts. Australia played a game plan the All Blacks never saw coming, and again the inability to adapt cost the All Blacks the game. Having said that, one intercept try made all the difference, and Australia were always going to be very difficult to beat on their home turf. Australia went on to lose to England in the final. This time there was no heartless playoff for the kiwi’s who took their frustration out on France.

Overall, the history of New Zealand at world cups has been disappointing for fans, but only one country, Australia, can boast a better record. The ‘choker’ tag is more something used to rile up New Zealand fans than something any team actually believes. Going in to the 2007 World Cup the All Blacks have beaten all the major nations comfortably, several times by 30 points or more. Remarkably they have done this with a squad system that means they often play their second 15 in any given match. No other country in the Rugby World has demonstrated the depth to contemplate this, yet in 2006 the All Blacks dropped only one match – the ‘dead rubber’ in Ristenburg to a South African team fuelled by desperation.

Competitors should consider the New Zealand team chokers at their own peril. They are runaway favourites to win the 2007 World Cup, but not invincible as Rustenburg showed. 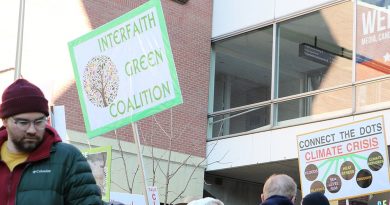 For many young evangelicals in Iowa, climate is front and centre | USA News

Panavia Tornado in the 1991 Gulf War