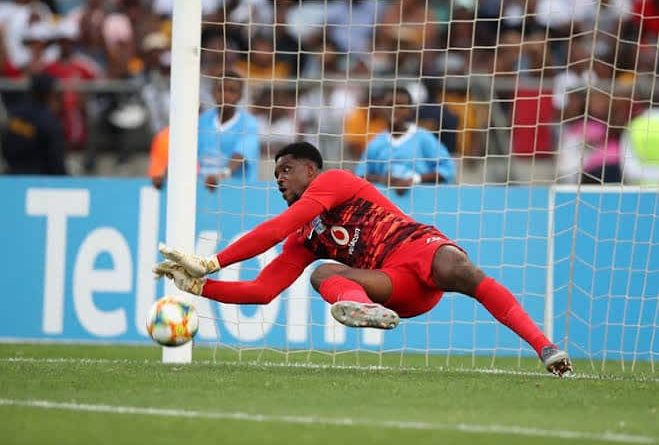 The Nigerian international goalkeeper has received several knocks for his unconvincing displays in recent weeks, but a former club star maintains that the defence is equally to blame

Retired Kaizer Chiefs defender Patrick Mayo has thrown his support for under-pressure goalie Daniel Akpeyi, absolving him of any wrongdoing in the club’s loss to Mamelodi Sundowns on Thursday.

Chiefs continued their terrible run of form, losing 1-0 at home to their bitter rivals and title challengers Sundowns – the club’s second loss in their last three matches.

That crushing defeat catapulted Sundowns to joint-top of the South African Premier Soccer League, increasing the pressure on Ernst Middendorp’s men who had led the table for the better part of the campaign.

Many, including former Chiefs winger Junior Khanye, continue to call for Akpeyi to be replaced by long-time shot-stopper Itumeleng Khune, but Mayo insists the Nigerian is not at fault for Kaizer Chiefs’ struggles.

“Firstly, I cannot blame Akpeyi for their struggles because they don’t have a centre-back that will marshal that defence,” Mayo told Goal.

“So, if the defence is leaking, that means the goalkeeper will eventually concede because he is the last line of defence. He saves them in so many games, and he can’t always be a saviour, he will save them up to a certain extent.

“I won’t blame Akpeyi, and even if they can have Khune for the remaining three matches, if Chiefs is meant to lose, we are going to lose.”

Citing as an example the winning goal scored by Mamelodi Sundowns at the Orlando Stadium earlier in the week, Mayo believes Kaizer Chiefs’ defence needs to improve if the Amakhosi desires to finish the season as champions.

“For instance, this goal scored by [Gaston] Sirino. How come do your centre-backs push at the same time? I think they needed someone that will press, [Erick] Mathoho was right to press but [Daniel] Cardoso should have stayed.

“The back heel by [Themba] Zwane allowed Sirino to have a clear sight at the goal and with Akpeyi forced to come out, it was easy to score that goal.

“I think Cardoso could have cleared the ball had he stayed behind and wait for the pass. It was too late for him to tackle Sirino. In my opinion, Chiefs need a centre back that will marshal the last line of defence.”

Kaizer Chiefs need to win their last three matches of the season to stand a chance of lifting the PSL trophy.