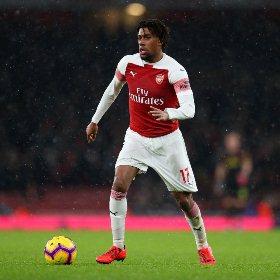 Everton star Alex Iwobi has detailed how highly respected French football tactician Arsene Wenger decided on his best position just before he was promoted to the Arsenal first team.

Iwobi praised his former employer for always giving young promising players in the academy an opportunity to train with the first team and he benefited from that.

“The thing about Arsenal which I’m grateful for, they’ll give you an opportunity to go and train,” Iwobi said in an interview published on Youtube by FOOTY258.

“Even if you are young they’ll always need a player to go up and obviously I’ll get the opportunity even if I’m told to go right-back, play center midfielder, wherever.

“The few times I got called up and he (Wenger) is the sort of guy that likes players that play forward and I’m also a player that likes to turn and go forward so when it’s like three tops, two touch games I’m ready, seeing my pass, I know how to position my body before I receive the ball.

Having run the rule over Iwobi and tested him in several offensive positions in midfield and attack, Wenger chose the number ten role playing from the left wing as his best position on the pitch.

The Nigeria international continued : “There will be a few times he wouldn’t expect it because he didn’t know what to expect from me so then I’ll be able to do it, that’s why from say 18 onward to like 21 he would have me playing in different positions across the midfield and I had to play upfront as well a couple of times because he didn’t know what position was best suited for me.

“But then he said because of my style of play, I’ll be number 10 on the left coming inside because ever since the day I trained with the first team he just admired the fact that I’m able to get the ball, turn and played forward and my first thoughts was always forward so that’s something that he’s always been proud of me for doing.”