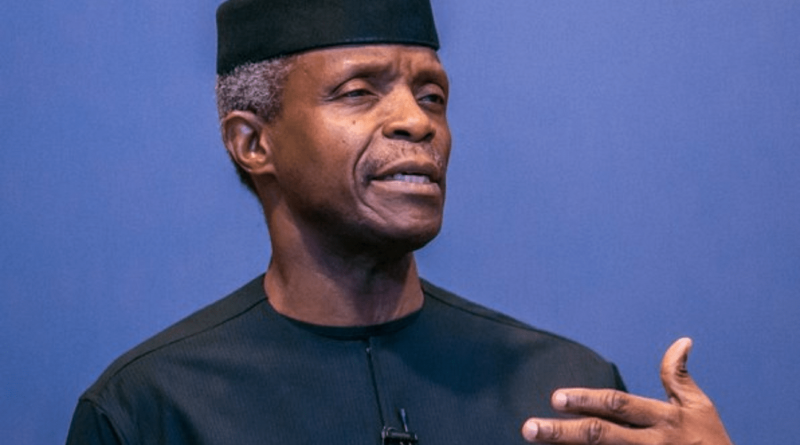 As African countries brace up for the effective implementation of the Africa Continental Free Trade Area (AfCFTA) agreement, one of the many ways by which the continent can maximize its benefits is to ensure that trade negotiations with the rest of the world be based on the free trade agreement rather than deals separately endorsed by regional economic blocs, according to Vice President Yemi Osinbajo, SAN.

The Vice President stated this in his keynote at the 61st annual conference of the Nigerian Economic Society (NES) themed “African Continental Free Trade Area (AfCFTA) in Post COVID-19 Era: What Next for Nigeria?”.

The event, which held virtually, was attended by a host of Nigeria’s leading economists, while Prof. Sarah Anyanwu, NES President, in her remarks after the VP’s keynote, commended both President Muhammadu Buhari and the Vice President. She added that “Prof. Osinbajo is a friend of our society, because he understands economic development.”

According to Prof. Osinbajo, “One important objective of the AfCFTA is to overcome the economic fragmentation of the continent by bringing the regional economic blocs together in a common arrangement. This being the case, African countries should look to negotiating trade treaties with other parts of the world on the basis of AfCFTA rather than through arbitrarily designed regional blocs.  African countries should not allow themselves to be lured into arrangements which do not serve their long-term development objectives.”

Speaking further about how the agreement can bolster trade and development on the continent, the Vice President said, “we must, of course, continue to bear in mind, especially here in Nigeria that the AfCFTA is not a magic wand that automatically brings about growth and prosperity.”

“The reality is that if care is not taken, trade liberalization can expose the Nigerian economy to unfair competition and sharp trade practices, with adverse consequences for our producers who might have to close down their businesses, and for our workers who would then lose their jobs.

“Successful implementation of the AfCFTA requires financing to address various implementation challenges and to promote arrangements in support of integration.  For instance, in addition to making up for potential losses of tariff revenues, African countries will face implementation costs, including undertaking reforms,

“Finding the resources to undertake these activities at a time like this when we lack fiscal space will, of course, prove to be very difficult for Nigeria and other African countries. Our economists should accordingly help to come up with innovative financing solutions for our economies,” the Vice President added.

Making the point about the AfCFTA being a guide for decisions on national economic blueprints, the Vice President said, “apart from reducing the spread of the COVID-19 virus and mitigating its effect on the domestic economy, Nigeria must have an interest in promoting an AfCFTA that catalyses regional value-chains, enables free movement of people, attracts investments and improves the continental payments system.

“As we seek to use the opportunities, we should remain alert to the need to create conditions that will enable our businesses to be able to compete and thrive within the AfCFTA. We can no longer plan without fully considering the AfCFTA; all planning and budgeting documents must take it into account. This explains why the current successor plan to the ERGP has the AFCFTA as an important reference.”

Regarding the Federal Government’s N2.3 trillion stimulus package, the VP said the plan was designed to mitigate the shock, tackle the vulnerabilities, create and protect jobs, as well as rescue businesses and reposition the economy.

“Our projections showed that without the stimulus, the economy was set to contract by -4.4% in 2020, but with implementation, including ramping up local production, we should be able to limit the negative growth to -0.59%.  Let me be clear, our desire to ramp up local production is not a call to autarky but rather an expenditure switching approach which can complement the AfCFTA desire to deepen regional value-chains,” he added.

Referring to Nigeria’s experience with the COVID-19 pandemic, Prof. Osinbajo said, “indeed, one thing that has become clear from our experiences of the last few months is the need for a vibrant and successful AfCFTA.

‘The pandemic has exposed our dependence on commodity exports to other parts of the world and on the import of manufactured goods from them.  As at 2017, intra-Africa trade in goods was $135 billion, which was just about 15% of Africa’s total trade.  This is in sharp contrast to trade in other regions, which is as high as 70% in the European Union and 60% in Asia.

“The imposition of export bans, including on food items by some countries and the disruption of global supply chains at the height of the pandemic, showed just how exposed and vulnerable African countries are because of limited productive capacity and a lack of regional value chains.”

The Vice President then noted some of the proactive steps taken by the Federal Government to participate effectively in the AfCFTA.

In his words, “…the Federal Government is investing heavily in power, road, rail and port infrastructure projects.  It is also why we are taking active steps to improve the business environment and to facilitate trade across our borders, including through the implementation of the National Trading Platform or Single Window Project.  Part of that project is the installation of scanners at our ports.

“Government also realizes, of course, that it needs to be able to enforce trade rules and apply trade remedies so that our partners in the AfCFTA, especially our neighbours, do not take undue advantage of our large market. You will be glad to know that the National Action Committee on the implementation of the AfCFTA, which is chaired by the Honourable Minister of Industry, Trade and Investment, is actively seized with these matters.”

He added that, “if the AfCFTA is to achieve the desired objectives, then it is also very important that Nigeria should push for the implementation of complementary programmes and protocols, including the Protocol on Free Movement of Persons, the pan-African payments system and other sectoral programmes.”

On the need for academics to be more involved in conversations that would deepen public knowledge and understanding of the economy, the Vice President called on members of Nigerian Economic Society to be more engaged in public policy debates.

He said, “I find every often that some public commentators make assertions that have no basis in economic theory or practice, and because they dominate the public space, they contribute to public misunderstanding of economic principles and their application to public policy. Some of you should take up the gauntlet and help to shape an informed and reasoned national discourse on the economy.”