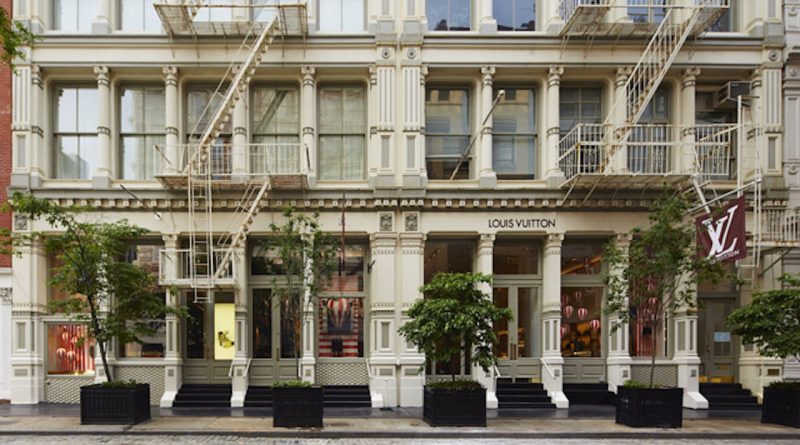 SoHo, long one of New York’s most desirable retail hubs, has been undergoing a transformation since the pandemic began. For years, it’s been the go-to neighborhood for hip, mostly-online brands looking to make the most impact in brick-and-mortar with the fewest number of stores. It’s not uncommon for brands to have only a single store in SoHo and nowhere else. But SoHo was also strongly reliant on tourist foot traffic, something that has largely dried up and likely won’t return in full force for a while.

In Lower Manhattan, retail foot traffic is down as much as 90%, and tourism has plunged. SoHo in particular has seen foot traffic cratering. The most expensive retail space in the neighborhood, 106 Spring Street — recently home to Moncler’s House of Genius pop-up — was forced to foreclose last week. Owner SL Green Realty was unable to keep up with costs for the site, while tenants were seeing minimal traffic. SoHo also is the target of new zoning proposals from mayor Bill de Blasio meant to make the neighborhood more affordable.

Despite the bleak situation in SoHo, retail tenants are confident that the neighborhood will return to its former glory. Some are using the opportunity presented by the pandemic — average retail rents in SoHo have dropped from $700 per square foot to $437 per square foot, according to CNBC — to secure a valuable location and a favorable rent. Then, it’s just a matter of surviving on a trickle of foot traffic until shoppers return.

Here’s how four brands with stores (or plans for stores) in the neighborhood are preparing for the future.

Dagne Dover
In 2018, Dagne Dover opened its first brick-and-mortar pop-up in SoHo. Originally meant to only last a a few weeks, the brand kept the store open for years until the pandemic led the company to shut it down permanently. But COO Deepa Gandhi said the brand won’t be away from SoHo for long. The team is already planning a more permanent return to the neighborhood in the next few weeks.

Gandhi said SoHo provided the perfect mix of being a place where people live and work, but also a destination where people come to discover new brands. She said she doesn’t see that changing in the long term.

Gandhi said other apparel brand founders she’s talked to with stores in the neighborhood saw their foot traffic down by 70-90% when stores first reopened, but that’s now around 50% and rising each day. She said she expects foot traffic to be low when Dagne Dover does open its store, but her team is prepared to weather the drought in order to secure a good position in SoHo. It helps that the landlords in SoHo have been more lenient and willing to sign shorter leases than in other areas of the city, like on Fifth Avenue, Gandhi said.

Naked Retail
Naked Retail operates two NYC stores, in SoHo and Nolita, that are stocked with all kinds of hip DTC brands like Pangaia and Lele Sadoughi. Like many brands in the area, a large percentage of sales at its SoHo store come from tourists.

Naked Retail’s store in the lobby of the hotel 11 Howard was almost entirely patronized by tourists, but that store has been closed for months. The hotel itself only just reopened a few days ago, but the Naked store remains closed. The store damaged during a protest over the summer, and Naked Retail co-founder Justin Kerzner said there’s no point in reopening while there are so few travelers staying at the hotel.

At the nearby Naked store on Mulberry Street (technically Nolita rather than SoHo, but only by two blocks), Kerzner said sales are typically split between 70% local customers and 30% out-of-towners. That has shifted to nearly 100% local customers since the store reopened this week.

That change has led the company to restrategize around what brands to stock.

“We immediately started looking at home and wellness brands, beverage brands — things that are local and consistent and not reliant on tourism,” Kerzner said.

Kerzner said more customers are shopping with intent for specific brands, rather than wandering into a store or pop-up for a brand they’ve never heard of. This concerned some of the smaller brands who sell through Naked who were worried that their small followings meant no one would come out to the store just for them.

“For the brands that were uneasy, we started bringing in a few big names that already had large followings, like [accessories brand] Bala — brands that people already know and will come to our store specifically to shop,” Kerzner said. Naked promotes the presence of these big brands to its Instagram audience and email list. “Then, while they’re here for those brands, they’ll stumble upon the smaller ones. That’s what we’re expecting, and I think it’s made the smaller brands more confident.”

In the future, Kerzner — who declined to give sales numbers for the stores — said he won’t likely bank on certain parts of SoHo, like Wooster Street, which has recently lost some big names like Lululemon. And overall he thinks the neighborhood will recover slowly. He’s already seeing foot traffic levels close to, but not yet level with, pre-pandemic numbers.

Untuckit
DTC men’s brand Untuckit’s first store was in SoHo, opened in 2015. It has been the top-performing location for the brand out of the more than 85 stores it’s opened since.

It’s been so successful, according to Brent Paulsen, vp of retail at Untuckit, that it was what inspired the brand to become so aggressive about opening new stores in the first place. Despite being founded in New Jersey, the company’s corporate office is in SoHo, as well — two blocks from the store.

“SoHo is a great place for brands to show up,” Paulsen said. “It’s one of the first places you look at when you’re doing a pop-up, it’s a great place for people to socialize and shop. It was an easy choice for us in the beginning. It really allowed us to jumpstart our brick-and-mortar strategy. It’s really helped a lot of brands get discovered by more people, as well.”

Paulsen said it’s always been a healthy mix of local and tourist customers to the SoHo store, though he couldn’t pin an exact number to the breakdown. The SoHo store reopened in July.

In May, the company tapped a real estate restructuring firm RCS Real Estate Advisors to help it renegotiate leases with its landlords. Untuckit declined to offer any sales or foot traffic data on its SoHo store.

“SoHo has always been a place for successful retail, for 20 years now,” Paulsen said. “Tourists might take a bit longer to come back, but we’re already seeing a lot of locals visiting the store.”

Suitsupply
Unlike some brands with SoHo stores, Suitsupply doesn’t rely on tourism, according to CEO Fokke de Jong. He said the majority of the brand’s New York customers are people who live and work in the city, which means the brand didn’t suffer as much from the lack of out of town foot traffic. Additionally, after its stores temporarily closed, a bank loan and an infusion of $11.6 million from NPM Capital in June, kept the company afloat. Suitsupply has over a dozen stores in the U.S., which brought in more than $140 million in 2019. Suitsupply doesn’t provide sales data on individual stores, but de Jong said the SoHo store is one of its top-performing locations and New York is its largest market in general.

While many other brands have closed stores and scaled back their brick-and-mortar presence in favor of online sales, Suitsupply has been expanding. The brand recently unveiled an additional two floors of its SoHo store, meant to cater to private appointment shopping. De Jong said he expects to see more appointment shopping in SoHo, moving forward.

“The New York market will come back pretty strongly, pretty soon. The neighborhood has changed dramatically, even in the time since Labor Day,” said de Jong, citing a slight increase in foot traffic in the last month. “It’s always going to have a strong importance for fashion, even though it’s hurting right now because of the lack of tourists. But we’re confident in it.”