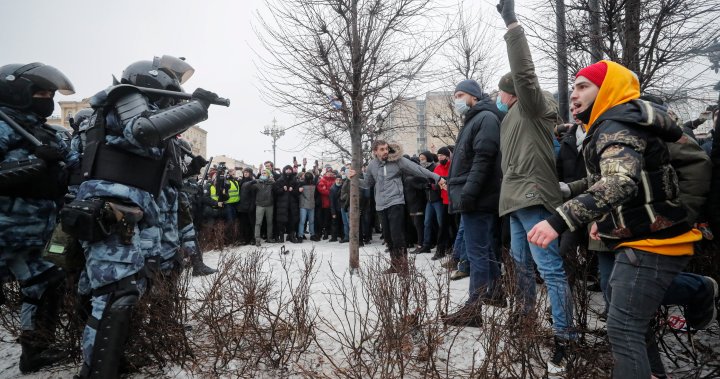 Thousands of protesters in Russia have been arrested for demanding the release of Alexei Navalny, one of the country’s most prominent political opposition leaders and an outspoken critic of Russian President Vladimir Putin.

Police arrested more than 2,600 protesters, as well as Navalny’s wife, Yulia Navalnaya, on Saturday. The demonstrations have drawn an estimated 15,000 people and have taken place across the country, where some in Russia’s Far East and Siberia have braved temperatures of around -50 C to express their concerns.

Why was Alexei Navalny arrested?

Navalny was arrested shortly after his flight from Berlin back to Moscow on Jan. 17, which authorities said violated the terms of a suspended 2014 conviction for money-laundering. Navalny maintains the money-laundering case was illegitimate.

Over the last five months, he had been recovering in Germany after being poisoned by a deadly military-grade nerve agent called Novichok — the same nerve agent used to poison former Russian spy Sergei Skripal and his daughter in the United Kingdom in 2018. Navalny has blamed the Kremlin for his poisoning. Putin has denied the accusation.

Shortly after arriving in the Sheremetyevo airport, Kira Yarmysh, a spokesperson for Navalny, tweeted police had arrested the Russian opposition leader and remanded him into custody for 30 days. Navalny has reportedly been refused legal counsel and is expected to appear in court in early February.

The arrest set off nationwide protests, with many calling for Navalny’s release and criticizing Putin directly.

As of late Saturday afternoon, OVD-info, an independent Russian group that tracks arrests at protests, said more than 3,060 people had been detained across the country in protests in support of Navalny.

Navalny’s arrest drew condemnation from several countries including Canada, the United States and the European Union.

The White House called on the Russian government to release Navalny in a statement posted Saturday, lambasting the Kremlin for its “years of tightening restrictions on and repressive actions against civil society, independent media, and the political opposition.”

“Continued efforts to suppress Russians’ rights to peaceful assembly and freedom of expression, the arrest of opposition figure Aleksey (sic) Navalny, and the crackdown on protests that followed are troubling indications of further restrictions on civil society and fundamental freedoms,” the statement read.

Canada’s Embassy to Russia also urged Russian authorities to “respect the right of citizens to protest peacefully,” in a tweet on Saturday, adding the embassy was “concerned by reports of violence and detentions of demonstrators.”

Shortly after Navalny was remanded into custody on Jan. 17, Global Affairs Canada said it was “deeply concerned,” demanding the Russian government “ensure his safety and answer the questions around his poisoning” in a tweet.

“The world is watching,” they said.

Has this happened before?

This is not the first time dissenters of Putin have faced severe consequences.

Pyotr Verzilov, a member of the punk activist group Pussy Riot was hospitalized due to suspected poisoning in September of 2018.

Prior to his poisoning, the New Yorker wrote he had been working with three Russian journalists who were later shot dead while reporting on “a mercenary force linked to a close associate of President Vladimir Putin.”

Several other members of Pussy Riot, Olya Borisova and Sasha Sofeev, went missing earlier that year. Members have frequently gone missing or been jailed and in one instance, whipped by a Cossack.

Earlier that year, former Russian spy Sergei Skripal and his daughter were poisoned with Novichok while in the U.K. Two members of Russia’s GRU intelligence services were charged for the attack.

After the verdict, Nemtsov’s eldest daughter, Zhanna Nemtsova, said “the case remains unsolved,” citing irregularities during the investigation. “Investigators and the court clearly did not want to uncover the truth about this crime,” she said.

Former KGB agent Alexander Litvinenko died after being poisoned with polonium in 2006.

In 2016, the British government published a scathing report that detailed an orchestrated plan approved by Putin to have Litvinenko killed for calling him a pedophile. The Kremlin has denied any involvement.