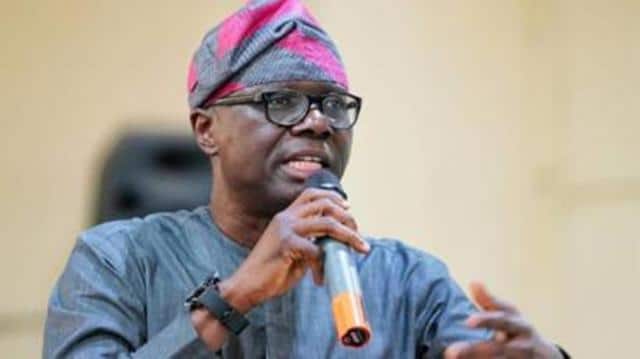 Lagos State Governor, Babajide Sanwo-Olu, has denied claims that the state government ordered the shooting of #ENDSARS protesters at the Lekki Toll Plaza.

Military personnel on Tuesday opened fired to disperse the protesters who had camped at the toll gate for days demanding an end to police brutality and extrajudicial killings across the country.

In a statement released by his Chief Press Secretary, Gboyega Akosile, Sanwo-Olu was quoted to have said the State Government did not order the military shooting, which left about 11 of the youths severely injured.

The Governor while speaking at a live television programme on Thursday also sustained his earlier assertion that no protester died in the incident except one that died from blunt force trauma and another corpse that was recovered by the police in the Victoria Island area with bullet wounds.

He urged members of the public with credible information on anyone or group of persons killed in the incident to come forward with the claim.

Sanwo-Olu explained that he has been unable to speak directly to President Muhammadu Buhari since the unfortunate incident occurred despite making two attempts.

The Governor also debunked claims that he ordered the alleged removal of Close-Circuit Television (CCTV) security cameras at the Toll Plaza before the shooting started.

He said an investigation may commence next Monday into the incident.

Read the full statement below:

WE DID NOT ORDER LEKKI SHOOTING – SANWO-OLU

…Governor: “No CCTV Camera Removed From Lekki Tollgate Before Incident’

Lagos State Governor, Mr. Babajide Sanwo-Olu, has, again, spoken on the ugly incident that happened at the Lekki Toll Plaza on Tuesday evening, in which military personnel used live ammunition to disperse EndSARS protesters who camped at the tollgate to demand for the end to police brutality.

Sanwo-Olu maintained that the State Government did not order the military shooting, which left about 11 of the youths severely injured. The Governor also sustained his earlier assertion that, no protester died in the incident, stressing that he and officials of the State Government had gone round private and public health facilities across the State without being able to identify bodies of those allegedly killed in the incident except one that died from blunt force trauma and another corpse that was recovered by the police in the Victoria Island area with bullet wounds.

The Governor appeared on The Morning Show programme aired live on Arise News, said the State was already investigating whether the deceased was a protester.

Sanwo-Olu asked members of the public with credible information on anyone or group of persons killed in the incident to come forward with the claim. He said the social media overblew the proportion of the incident with what he described as “false information” being shared by those who were not at the scene of the incident.

The Governor spoke on the alleged removal of Close-Circuit Television (CCTV) security cameras at the Toll Plaza before the shooting started, debunking the claims that he ordered the action. Sanwo-Olu said the cameras that were removed were not security cameras but laser cameras meant to capture vehicles’ electronic tags and number plates. He said the removal of the laser cameras was a decision taken by Lekki Concession Company (LCC) that owns the facility.

He said: “When I spoke to the Managing Director of LCC over the matter, he told me the company took the decision to remove installations critical to their service when the curfew was announced. Those cameras that were displayed in the viral pictures were not security or motion cameras. They are laser cameras for vehicles, specifically designed to pick electronic tags and number plates on cars. Security cameras installed at the Toll Plaza are still there as I speak and the footages from them are the ones that we will be using in probing the Lekki incident. Since Tuesday, the security cameras at the Toll Plaza are still there and nobody can touch them.”

Sanwo-Olu said multi-agency investigation into Lekki incident may begin next Monday when order would have been fully restored across the State, pointing out that the recordings of the CCTV security cameras at the Toll Plaza would be useful in unraveling the circumstance that surrounded the incident.

Members of the public, the Governor said, will be part of the investigation for transparency. He added that security experts would be involved to analyse the recordings of the CCTV security cameras to ensured the footages captured since the time the protesters started camping at the tollgate were not tampered with.

On the allegation that he influenced the switching off of the billboard that illuminated the Toll Plaza area at night, Sanwo-Olu said the concessionaire that operates the billboard took the decision independently after the curfew order was announced.

Speaking on the aftermath of the organised attacks on government properties, iconic buildings and private assets, Sanwo-Olu said the nature of the destruction indicated an attempt by the arsonists to keep the State in limbo. He said the attacks were specifically targeted at emergency response infrastructure of the State to weaken its response in the case of large-scale violence.

The Governor disclosed that the arsonists, in the organised destruction, razed four State-owned fire stations and five fire trucks. He said the reconstruction of the damaged assets would cost billions, but said the State would bounce back after the devastation.

Sanwo-Olu said it would be insensitive for him to buttress the narrative linking the arsonist attacks on public buildings to sectarian elements, saying his immediate priority was to salvage the damaged assets and prevent further attacks. He, however, said all materials suggesting the arson may have been organised by secessionists would be left for security agencies for proper analysis.

Clarifying his statement that forces beyond him were behind the deployment of troops to Lekki axis, the Governor said: “The hierarchy and chains of command in the military are not within my purview. This is not something I have responsibility for. I do not have such power to control or activate the military. That essentially is what I was trying to say in that particular phrase.”

He also explained that he reached out to President Muhammadu Buhari on two occasions to seek for more help as public assets in the State were being destroyed. He said the President responded, directing the Chief of Defence Staff to liaise with him.

He said: “I made phone calls to speak to the President twice yesterday (Wednesday). The first time, he (president) hadn’t come to the office. The second time, he was at the Federal Executive Council (FEC) meeting. Indeed, I haven’t spoken to him directly. He was actually the one who directed the Chief of Defence Staff to call me and I feel that it was when he got my message. Because, when the Chief of Defence Staff called me, he said to me it was the President that asked him to call. But, I haven’t spoken to the President directly; maybe later today, that might happen.”

Aftermath of the destruction, Sanwo-Olu urged the residents of Lagos to come together and heal the wounds inflicted on the State by the arsonists. He said the ugly incident put citizens’ patriotism to test, urging them to unite and re-build the State from the ruins left by the attacks.

He said: “We are at a point where all of us as a people living in the State must come together more than ever before. Our patriotism has been put to test and we need to re-engage ourselves and heal the several wounds that have been inflicted on us. We do not have any other country; this is our country.

“In Lagos, we cannot afford to put to waste what our forefathers and the generation of leaders before us have put in place. We need to preserve our heritage and we need to know that indeed we can build a future for our children. We need to put an end to any form of anger, protest, confrontation and bleeding. Let us come together and start a real healing process.”