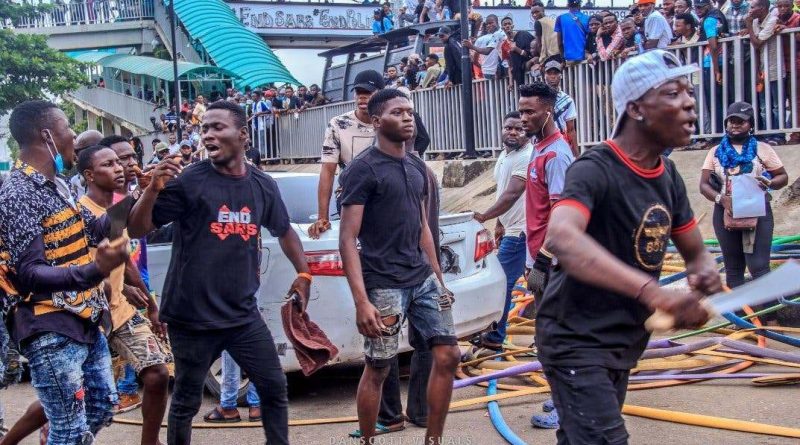 We found ourselves experiencing another wave of lockdown in the country this week. It was not government this time that stopped people from going to work or performing their daily chores. This was in fact anti-government.

Nigerians went out late last week to find largely peaceful protests on the streets that gradually spread throughout the country culminating in a virtual shut down this week.

The protest is the result of bottled up resentments by the youths against the methods of police in general and the Special Anti- Robbery Squad (SARS) in particular. But if truth must be told, this is not the only thing that has drawn the ire of young people. There is a catalogue of resentments against the establishment. Every young person has his own angst against the system but police brutality is common to almost all of them.

It is not that the idea behind SARS is wrong; or that there is no need for SARS. Some of those walking the streets with placards need to be locked up. Some are actually yahoo boys who are giving Nigerian youths a bad name. Some are jobless miscreants who thrive in chaos and lawlessness. Already there are tales of people who have been mobbed and attacked during the protests. It will also not be right to state that every SARS officer is an extortionist.

That will also make us guilty of bad profiling just as the police has wrongly profiled every young man with a laptop, an expensive phone and a decent car as a yahoo boy. It is fair to state that we are in this situation because of the system we run. And because we promote mediocrity, nepotism and therefore impunity and lack of accountability, almost every laudable project we start end up in shambles – from refineries to NDDC to EFCC to SARS. I have been playing squash on and off at the Police College for over forty years and I see some of the training that new entrants are subjected to. To say very few things have improved in those forty years is an understatement.

Many things have actually deteriorated. You cannot train people in a dehumanised way and expect them to be human. You cannot take away their dignity and expect them not to have a chip on their shoulders. The recruits are trained for the jungle and thrown ill equipped, into the wild. They have had to rely on their survival instincts. The fault therefore, is not in the SARS. We created the monster. It is also not in the name. Given the same orientation, any other formation will be just as wild.

Yet we need the police. Like a retired Police Commissioner used to say ‘if you say the Police is bad, call an armed robber when next you are in trouble’. Even this short period of ‘siddon look’ by the Police has witnessed an escalation in crime. What we don’t want is the Police in this present state of a dehumanised police dehumanising the citizenry.

As for the youths, it is irresponsible that successive governments have not found creative ways of engaging them as the life force of the country knowing we are by and large, a youthful country. It is hard for example to believe that over 90% of Nigerians are under 60 years when all we see are geriatrics like me or older running almost every aspect of our public life. And there is no conscious succession plan. Instead, many of our youths are badly trained, badly orientated and thrown into the wild of the Nigerian jungle where they have had to hone their survival instincts. It needed no prophet to predict a day of reckoning would come soon.

Through incompetence, short sightedness and greed, we created a monster in millions of unemployed and disgruntled youths which has been gnawing at us through crime and insecurity. We didn’t heed the wake-up call. Unfortunately, or maybe fortunately, this monster has now tasted blood and found it sweet.

There is no telling what or whom it will have for its next meal. This protest has unearthed and energised a latent power in our youths which has given them wings to quote the Red Bull advert. The leaders will need all their wiles to contain this situation. The youths need to find the maturity to prevent a descent into chaos. Nobody I am sure wants an Arab Spring.

The government in quickly acceding to the five point request of the protesters has been wise and responsive. It however needs to go further to demonstrate that it is not the usual government gimmick. A time-table for police reform should be released while a time-table for other reforms should be on the cards. The protesters should accept government’s response at face value and come out of the trenches. They can return if nothing is done.

It is clear that police brutality is just one of the many grievances the youths have against this government and the country. It is tempting to use this opportunity to fight for more. But it would be unwise. Wars are won through series of battles. Each battle might need different strategies and tactics. Besides, a long drawn out war has economic implications on both sides. This could be dire for an economy in recession. Young people with families would bear the brunt. Besides, it could become a war of attrition within and without.

Loyalty to the cause and to persons would be sorely tested. Those who could not earn an income because of the enforced lockdown this week might not be too enthusiastic next week. Heroes, villains and betrayers would emerge. Casualties would soar.

Finally, the protesters should be careful not to let this become an uprising. There would be people egging them on. Many of those people would have their own agenda. It should also be noted that many uprisings don’t end well. Many initiators of protests which turn into uprisings lose control. Many are devoured by the monsters they helped to create.

Government on the other hand should see this as a wake-up call. It can no longer be business as usual. Police reform is not the only reform needed. There is need to reform cost of governance. Pensions for political jobs must be reformed. National Assembly must be reformed. Youths must be engaged. We created this monster. It must be fed. I can only wish as an elder, that the youths would pick their battles. There are many of them.