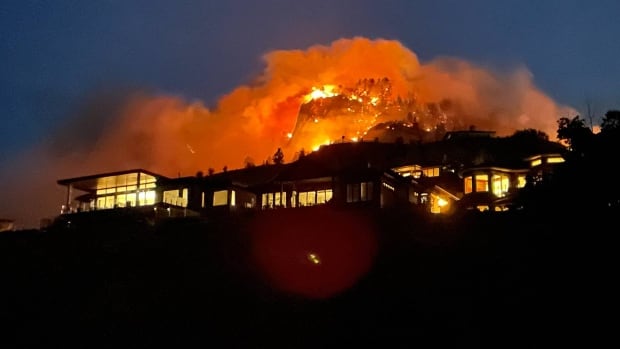 The authors of a B.C. government review of 2017’s record-setting wildfire season are urging the province to take their report off the shelf.

As more communities in B.C. brace for evacuations this wildfire season, one which already saw the town of Lytton destroyed, George Abbott and Chief Maureen Chapman say they warned the province about many of the very problems B.C. has faced this year.

Chapman is the chief of Sq’ewá:lxw First Nation; Abbott is a former provincial cabinet minister. Three years ago, the pair released their provincially mandated review of one of the worst fire and flood seasons B.C. had seen, titled Addressing the New Normal: 21st Century Disaster Management in British Columbia.

Both spoke to CBC News about their frustrations watching this year’s early wildfire season response and some of the criticisms levelled at the government from Indigenous leaders, municipalities and evacuees.

“The 2017 season and the flood season were both seen as wake-up calls in terms of government needing to up its game,” Abbott said. “If there are residual red tape barriers to us moving forward with the kind of program that’s needed, let’s try to address them as quickly as we can, because climate’s not waiting for us on this one.”

The 148-page report identified major communication gaps, poor relations and cooperation with First Nations, and inadequate prevention measures — all of which had hampered B.C.’s response.

Mike Farnworth, B.C.’s minister of public safety, tells CBC’s Power & Politics that his government is undertaking a ‘complete overhaul and rewrite’ of B.C.’s Emergency Program Act, and is looking at the effect climate change is having on the province. 9:21

And with climate change already fuelling earlier and longer fire seasons and record-setting temperatures, there is simply no time to lose, Chapman said. Yet this year saw Indigenous leaders speaking out about what they described as a lack of respect and coordination from provincial authorities during evacuations, as well as what Chapman described as bureaucratic barriers to doing traditional Indigenous controlled burns as a preventive measure.

“It doesn’t need to come to what’s happened if everyone was communicating with each other and staying on top of this whole fire season, flood season,” Chapman said. “This report needs to be taken off the shelf.”

The provincial government insists it hasn’t “shelved” the report, and although the public safety minister was not available for an interview, he spoke recently about an imminent “overhaul” of B.C.’s emergency laws.

A spokesperson for Emergency Management B.C. told CBC that provincial staff “have been working diligently” implementing Abbott and Chapman’s report, saying their recommendations are “92 per cent” implemented. And their advice will be taken into account in the Emergency Program Act reforms coming out later this year or early next year.

“Staff from multiple ministries have been working diligently to respond to the report’s recommendations,” said Emergency Management B.C. in a statement. “We recognize that in a changing climate, we need to invest heavily in wildfire prevention and preparedness initiatives to help keep British Columbians safe and protect the province’s natural resources and infrastructure.”‘

‘Bureaucracy gets in the way’

For Chapman, what she believes are “good intentions” after what was at the time an unprecedented fire and flood season have not translated into meaningful or adequate changes on the ground.

And while she and Abbott acknowledge government has said it’s implemented most of their advice, what’s on paper hasn’t always translated onto the front lines during this year’s firefighting and evacuations.

For example, Nlaka’pamux Nation Tribal Council’s chair, Chief Matt Pasco, said it took hours for emergency authorities to respond to his requests for co-ordination and assistance as residents evacuated Lytton First Nation on June 30 — hours after he received a call from provincial officials asking him about the welfare of cattle on his own nearby ranch.

B.C. later apologized for the incident.

Abbott said he doesn’t think attributing “blame” for some of this year’s mistakes, including the province’s admission it fell short of “expectations” on working with First Nations during the Lytton evacuation, is “particularly useful or constructive.”

But he urged the province to improve its emergency communications and cooperation during wildfires, remove any policy barriers to controlled burns, and anticipate many more extreme weather events like flooding, lightning storms, and extreme temperatures — like this summer’s record-shattering heat dome that sparked the early fire season.

“All of these pieces, I think, are hugely important for our future.”

Anyone placed under an evacuation order must leave the area immediately.

Evacuation centres have been set up throughout the province to assist anyone evacuating from a community under threat from a wildfire. To find the centre closest to you, visit the Emergency Management B.C. website.

Evacuees are encouraged to register with Emergency Support Services online, whether or not they access services at an evacuation centre.

COVID-19: New wave of restrictions in US amid latest surge | US & Canada