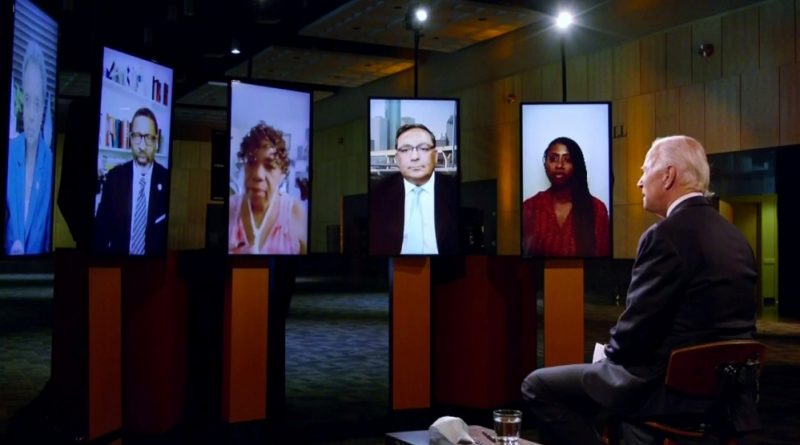 A series of former elected officials – all Republicans – voiced their support for Biden during the DNC.

“In normal times, this would never happen”, former Ohio Governor John Kasich, a lifelong Republican, said in a video, “but these are not normal times.”

Trump is dividing the nation, Kasich, a longtime political adversary of the president said. The former governor called on fellow Republicans to help elect Biden to “unite” the United States.

John Kasich: “I’m sure there are Republicans and Independents who couldn’t imagine crossing over to support a Democrat. They fear Joe may turn sharp left and leave them behind. I don’t believe that because I know the measure of the man. It’s reasonable, faithful, respectful.”

While Kasich said there are areas where he and Biden disagree, and that many Republicans may have difficulty “crossing the aisle” to support him, but the “stakes in this election are greater than any in modern times”, Kasich said.

“I know that Joe Biden with his experience, his wisdom and his decency” can bring the US together, Kasich said.

New York Governor Andrew Cuomo, whose political stock has risen in thanks to his handling of the coronavirus pandemic, addressed the DNC by calling out Trump’s stewardship during the pandemic.

“Our nation is in crisis, and in many ways, COVID is just a metaphor,” Cuomo said. “A virus attacks when the body is weak and when it cannot defend itself. Over these past few years, America’s body politic has been weakened.”

.@AndrewCuomo, thank you for your leadership and the example you’ve set for all Americans during this pandemic. #DemConvention pic.twitter.com/Ir11a1vJQs

New York was originally the US hotspot for the pandemic. New York City, especially, saw startlingly high contraction and death rates as the coronavirus spread.

But New York is now leading the US, keeping numbers low during its cautious reopening.

“Only a strong body can fight off the virus, and America’s divisions weakened it,” Cuomo continued.

“Donald Trump didn’t create the initial division. The division created Trump; he only made it worse.”

Philonise Floyd, the brother of George Floyd, the man whose death in police custody in Minneapolis in May helped spark a nationwide protest movement, addressed the DNC on Monday night.

Before leading a moment of silence for those who lost their lives, Floyd voiced his support for peaceful protests.

“George was selfless. He always made sacrifices for his family, friends, and even complete strangers. George had a giving spirit. A spirit that has shown up on streets around our nation, and around the world – people of all races, all ages, all genders, all backgrounds – peacefully protesting in the name of love and unity.”

01:06 GMT – Convention kicks off with talk of unity in the face of Trump

The first-ever Democratic National Convention kicked off with Eva Longoria putting attention on the coronavirus, the spread of which has been blamed largely on the Trump administration.

“The tragedy has affected us all” Longoria said, citing the over 170,000 people who have died due to COVID-19, the disease which the virus causes.

Here we go! Check it out tonight to learn and be inspired for the future of our country! 🇺🇸https://t.co/GIf7neWRVo pic.twitter.com/be1QAYktsu

Four years under the Trump administration has left us “diminished and divided”, Longoria said, but the difficulties have also brought the US together.

The convention then went to a montage of people reading the preamble of the US Constitution, where the words “We the people” lead to a group singing the opening lines of the national anthem.

Senator Bernie Sanders, a political independent who is the leader of the Democratic Party’s ascendent left wing, will call on all Democrats to unite under the Biden campaign.

“This election is the most important in the modern history of this country,” Sanders will say, according to prepared remarks.

We have got to beat Trump, an authoritarian who is trying to undermine American democracy. But it is not good enough just to defeat Trump. We need to create a new America and a government and an economy that works for all and not just a few.

Some have raised concerns the left-wing of the Democratic Party is being ignored by the party, even after Sanders came in second place during the primaries and looked poised to win the nomination before numerous candidates dropped out in an unprecedented show of moderate unity.

However, Sanders will ask “everyone who supported other candidates in this primary” to “come together, defeat Donald Trump and elect Joe Biden and Kamala Harris as our next president and vice president.”

“I know Joe,” Obama will say, according to a video excerpt of her pre-recorded remarks. “He is a profoundly decent man guided by faith. He was a terrific vice president. He knows what it takes to rescue an economy, beat back a pandemic and lead our country.”

A major talking point of the Biden campaign – especially since Kamala Harris was named as his running mate – has been Trump’s handling of the economy during the coronavirus pandemic.

The US has seen the deepest economic recession since the Great Depression under the Trump administration, though it previously saw one of the strongest economic growth periods in history.

Biden and Harris claim the Obama administration was responsible for the growth.

23:10 GMT – Trump says he will accept nomination from the White House

US President Donald Trump on Monday said he would accept the Republican nomination for a second term during a live speech at the White House next week, confirming plans that have drawn criticism from Democrats.

Trump last week told the New York Post he would “probably” accept the Republican nomination from the White House lawn, calling it “a place that makes me feel good”.

Democrats have accused the president of politicising the White House, a national symbol.

Speaker Pelosi says President Trump accepting the GOP nomination from the White House “is something that should be rejected right out of hand.”

“It’s a diversion, and that is what he is, a master of diversion.” pic.twitter.com/GUJWHnEw68

House Speaker Nancy Pelosi said during an interview on MSNBC that “for the president of the United States to degrade once again the White House as he has done over and over again by saying he’s going to completely politicise it, is something that should be rejected right out of hand.”

A former high-ranking official in the Trump administration has said he would back Biden as the US is “less secure” under Trump.

Miles Taylor, who served at the Department of Homeland Security between 2017 and 2019, including as chief of staff, said he “witnessed the damning results first-hand” of what he called Trump‘s “personal deficiencies.”

“I can attest that the country is less secure as a direct result of the president’s actions,” Taylor wrote in an op-ed published in the Washington Post on Monday.

Biden is expected to accept the Democratic nomination this week, leading to his showdown with Trump in November.