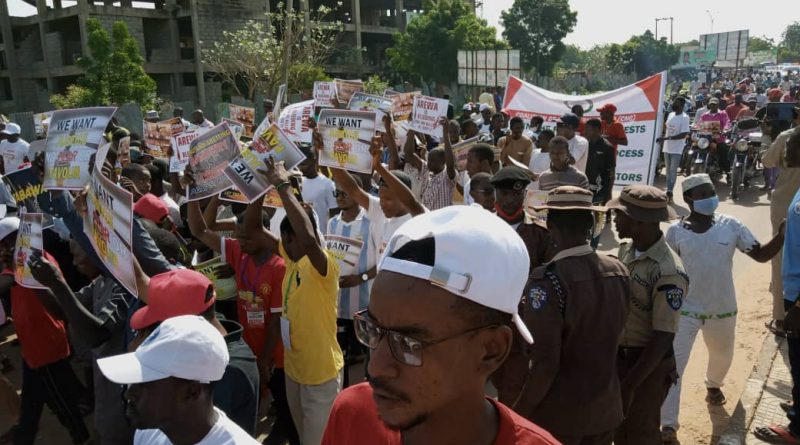 The Coalition of Northern Groups, CNG has staged a protest against the banditry in northern Nigeria.The protest which was held Wednesday in Gusau, Zamfara State capital was described as peaceful.

It was further revealed that the group submitted a petition to Zamfara State Government for onward transmission to President Muhammadu Buhari in Abuja.

One of the CNG leaders told Newsdiaryonline that the peaceful procession took off from the Tudun Wada roundabout and marched to the state House of Assembly under heavy security watch where it was received by Hon Yusuf Kanoma, the Chief Whip, the Clark of the House and many other members (of Zamfara State House of Assembly) who expressed solidarity and promised to transmit the petition to the presidency.

The protesters raised placards carrying various inscriptions such as “Arewa is bleeding”, “Return freed suspects to custody”, ” No to obstruction of justice process “, ” Allow the police to do its work”.

Watch video of the protest below:

There’s been a growing concern over the level of insurgency, bandit killings, kidnapping, rape, and displacement of entire communities in many states of northern Nigeria.
The Coalition of Northern Groups, disturbed by the bleeding in the North, hereby take the bold and necessary step to address this petition to Your Excellency to draw attention to the emerging trends in particularly Zamfara State that are pregnant with complications and unforeseen consequences.
By this patriotic representation, the CNG aims to forestall the drift toward anarchy and and more bloodshed in Nigeria, and also to alert the Presidency as to where responsibility would ultimately lie if such momentous and terrible events ever came to pass.

ZAMFARA REVIEW
Zamfara State has for long faced problems with armed groups stealing cattle, kidnapping for ransom and attacking communities, which has in turn prompted some local people to form vigilante gangs.
More recently, there has been a growth in informal mining activity in this mineral-rich region, which has attracted people from outside the state, further fuelling instability.
The situation deterioted so that the Nigeria Security Tracker, produced by the Washington-based Council on Foreign Relations (CFR), that monitors levels of violence in Zamfara and other places concluded that from the beginning of 2019, there have been 262 civilian deaths, while in the whole of 2018, there were 288 and 52 for 2017.
The CFR data also indicates there were 262 civilian deaths in the first 100 or so days of this year, that’s between two and three deaths each day, with indication that this number is rising.
Taking total civilian deaths from the beginning of March to 6 April, there have been 169 deaths in Zamfara alone- that’s compared to 28 in Borno State and 14 in Adamawa.
RECENT DEVELOPMENTS
Whereas the security situation in Zamfara state had considerably improved in the last one year, unfolding scenarios appear to endanger those gains, and peace is beginning to elude the state again with disastrous consequences on communities and individuals.
The situation in Zamfara is becoming worse literally by the day, with disturbing reports of bandits and internal collaborators exploiting a huge vacuum in political will to undermine security efforts.
REPORTED INSTANCES
1. On September 3, 2020, the state government secured a court order in Kaduna for the arrest of one Abdulmalik Bungudu, a suspected accomplice with top bandit leaders.
a. The warrant was executed and the suspect moved to Gusau for prosecution but released on bail, which he reportedly jumped.
2. On Friday, September 2, 2020, intelligence intercepted a conversation of an arranged meeting between some politicians in the state and some bandit leaders somewhere in Gusau.
a. On Saturday, September 3, 2020, detectives raided the meeting point and arrested a top politician one Abu Dan-Tabawa, along with 17 other suspects.
b. On Sunday, September 4, 2020, the Zamfara State Police Command set the said Dan-Tabawa free, ostensibly owing to pressure from powerful influences who would rather abuse their close positions and favours at the Aso Villa seat of power in Abuja, to undermine the efforts of the Mr President and his government.
INFERENCES
With these preliminary observations, it is inevitable that the CNG, as usual, showing decent patriotism and love of our country and fellow citizens to draw the following conclusions and inferences:
1. That unless the presidency directs the immediate re-arrest and return to custody of the said politicians and all other suspected collaborators for proper investigation and appropriate prosecution, it risks a serious dent on its integrity.
2. That Mr President under moral obligation to reclaim his statesmanship by ordering a full investigation into the circumstances that led to the suspicious release of the these and other suspects from lawful custody, outside due process would.
3. That a transparent action to determine the extent of involvement of persons close to him in the interruption of criminal proceedings against suspected bandits and collaborators in Zamfara and other places in the North would restore public confidence in Mr President’s will and capacity to secure the nation.
4. That Mr President has the obligation to restore the morale of nation’s security and law and order assets by ensuring the immediate end to undue partisan influence on the functions of the police, the Directorate of Security Services and other law and order assets charged with the preservation of the lives and properties of all Nigerians.
PRAYERS
1. We pray Your Excellency and his government to see this call for the security services to be allowed to carry out their duties unhindered, as a warning from history which repeats itself, according to Karl Marx, once as a farce and twice as a tragedy.
2. We urge Mr President and government security forces to renew the resolve to confront the security challenges in Zamfara and other parts of the North with resolve and awareness of their obligations under the law, as well as the knowledge that victory will only be pronounced when the nation achieves full cessation of hostilities, disarmament, demobilization and reintegration in the entire region.
CONCLUSION
We finally wish to commend the successes of our gallant troops and the strong will of the Nigeria Police Force and other security services in the fight against the ravaging security situation in the North and other parts of the country.
In particular, CNG finds the vigilance of the Police in Zamfara quite reassuring, and the new spirit of cooperation among the public laudable.

Thank you.
Long live the government and people of the Federal Republic of Nigeria!