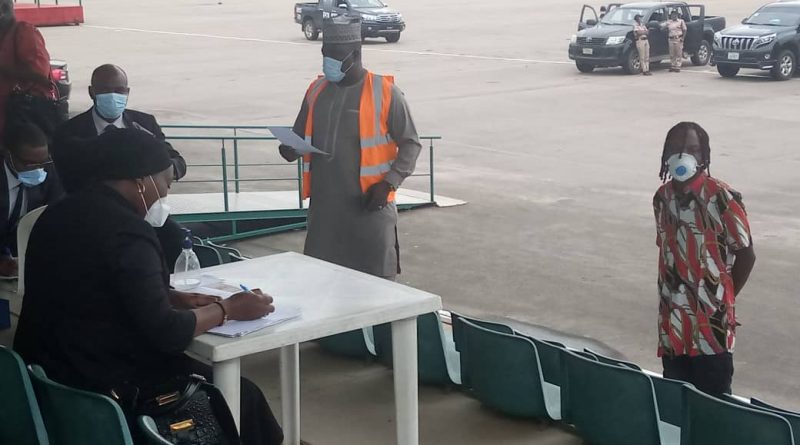 The FCT Task Team on COVID-19 arraigned Azeez Fashola, popularly known as Naira Marley on a four-count charge during the COVID-19 travel restriction in the Federal Capital Territory.

The musician was charged alone in a suit number MC/C-19/02/2020 between the Federal Republic of Nigeria and Azeez Fashola (a.k.a. Naira Marley) before Justice Idayat Akanni of the FCT COVID-19  Mobile Court sitting at the Eagle Square, Abuja.

The charge sheet held that this is a case of violation of the COVID-19 Regulation, 2020 made by Presidential Order pursuant to Section 4 of the Quarantine Act Cap 02, Laws of the Federation of Nigeria, 2004.

The four charges against the youthful musician on the charge sheet are as follows, @that ouAzeez Fashola On Saturday, June 13, 2020, during the hours of the day flew from LagosState by Executive JetAirline into Abuja, the Federal Capital Territory contrary to the Presidential Order banning interstate travelling and you thereby committed an offence.

“That you Azeez Fasholaon Saturday, June 13, 2020, during the hours of the day was found in public at the Nnamdi AzikiweAirportat JabiLake Mall without wearing a face mask contrary to the Presidential Order imposing compulsory wearing of face mask by all persons within Abuja the Federal Capital Territory and you thereby committed an offence.

“That you Azeez Fashola on Saturday, June 13, 2020, during the hours of the evening was found outside your residence and in public at JabiLake Mall engaged in an event which attracted a social congregation of persons and fans contrary to the Presidential Orderbanning all forms of social gathering in Abuja the Federal Capital Territory and you thereby committed an offence.

After listening to the four-count charge, Azeez pleaded guilty to the four counts as the Judge asked him to respond to them.

Before the court made a pronouncement, Counsel to the accused, Muhammed Yunusa (Esq) pleaded with the court for leniency, not because ignorance was an excuse, “but because my client did not have the intention to commit the offence.

“Your worship, we plead for your leniency with him because the nature of his business makes him to lack the total control of his itinerary and schedule.

“As you can see him before you Your Worship, he is very sober and has since regretted his actions, Counsel to Naira Marley pleaded.

In pronouncing the judgement, the court held that Azeez Fashola being a celebrity should have been a good example to his followers because, “if he did not hold that event, his large followers would also have followed his good examples.

The court thereby found him guilty and charged and asked him to “publish an apology to the Federal Government in any print medium.

Justice Idayat Akanni also asked the accused person to “pay a fine of fifty thousand nairas for each count.

Just at the initial days of the COVID-19 nationwide lock-down and restrictions on social gatherings in Nigeria, Naira Marley, who is not a stranger to controversies, was also indicted when he showed up at a party which actress, Funke Akindele, organised in honour of her husband, Abdulrasheed Bello, also known as JJC Skillz, in April this year.

Prior to his arraignment in Abuja, the artiste had faced similar charges in Lagos State. His Counsel, Muhammed Usain made attempts to tender the ruling of the Lagos State court to plead for the acquittal of his client, but he was overruled by Justice Akanni maintained that since the artiste embarked on the journey, he had flouted the restriction orders both in Lagos and Abuja.

According to a statement released by Lagos Police spokesman, Bala Elkana, Naira Marley and his manager were arraigned on a one-count charge at the Lagos State Special Offences (Mobile) Court, Oshodi around 3:30 pm.

Naira Marley flew a chattered flight to embark on non-essential travel from Lagos to Abuja and back to Lagos on the 13th of June this year, between the Murtala Muhammed International Airport, Ikeja and the Nnamdi Azikiwe International Airport, Abuja for a  well-publicized musical concert at the Jabi Lake Mall in the Federal Capital Territory, Abuja.

Details of the event later revealed that the concert was organised by Play Network Africa, Traffic Bar, and El’Carnival, and was sponsored by Glenfiddich.

Lagos Trial Prior to his appearance before the Abuja court, the musician was arraigned alongside his manager ‘f’ on one count charge of breach of the cessation of movement and interstates travel order made by the President of the Federal Republic of Nigeria under Regulation 4(i) of the Lagos State Infectious Disease Emergency Prevention) Regulation No 2 of 2020 and committed an offence punishable under Section 58 Public Health Law, Ch. P16, Laws of Lagos State 2015

The two accused persons pleaded guilty to the charge and were awarded a fine of one N100,000 each by the magistrate.