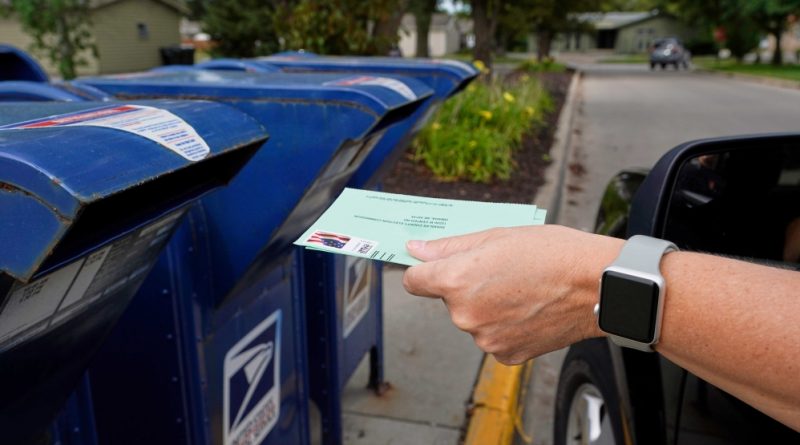 Mail-in voting in the United States presidential elections is set to begin on Friday as North Carolina starts sending out more than 600,000 ballots to voters – responding to a significant increase in requests across the country as voters look for a safer way to cast ballots during the coronavirus pandemic.

The 643,000 ballots requested in the initial wave in North Carolina were more than 16 times the number the state sent out at the same time four years ago.

The requests came overwhelmingly from Democratic and independent voters, a reflection of a new partisan divide over mail-in voting ahead of the November 3 election.

The North Carolina numbers were one more bit of evidence backing up what experts have been predicting for months: Worries about the novel coronavirus are likely to push tens of millions of voters to cast their ballots by mail for the first time, transforming the way the election is conducted and the vote is counted. 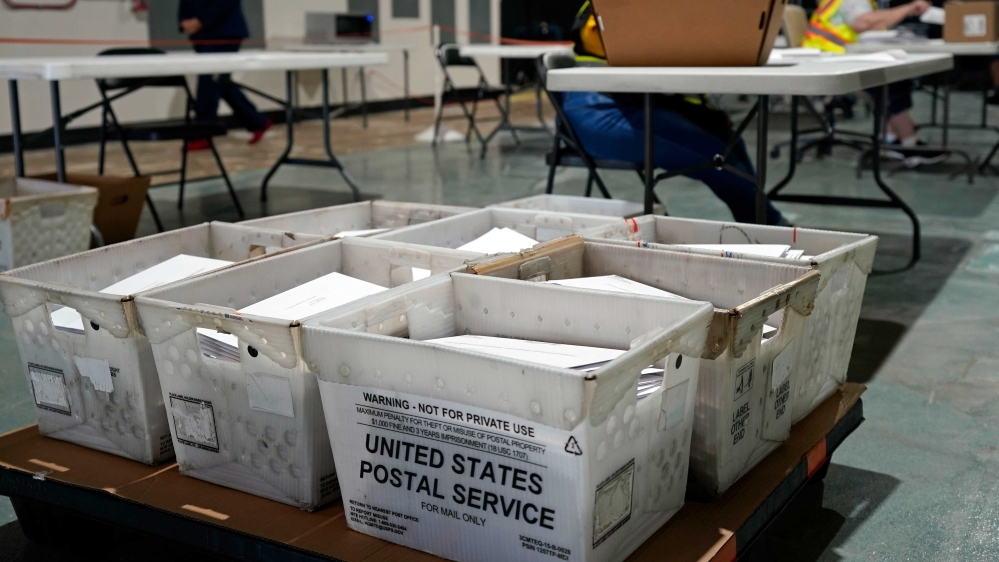 Workers prepare absentee ballots for mailing at the Wake County Board of Elections in Raleigh, North Carolina [Gerry Broome/AP]

In 2016, just one-quarter of the US electorate cast votes through the mail. This time, election officials expect the majority of voters to do so.

While ballots go out in two weeks in other battlegrounds like Minnesota, Pennsylvania and Wisconsin, all eyes are on North Carolina as it leads off.

Wake County, which includes the capital city of Raleigh, accounts for more than 100,000 absentee ballot requests so far. This week, the office groaned under the twin stresses of record mail-in voting and the pandemic.

On Thursday, workers in yellow vests and masks sat at folding tables spaced apart in a county warehouse, affixing address labels to envelopes and then putting the ballots inside.

Board of Elections Director Gary Sims said the pandemic presents new challenges for the workers, including staying spaced out and using hand-sanitiser as much as possible.

“We’re already at over three times the amount of requests that we’ve ever had in its entirety in an election. So that’s caused us to change some of our business processes,” Sims said.

The Republican party has historically done well in North Carolina mail-in voting, but this year, the people asking for the ballots are not generally Republicans. Democrats requested more than 337,000 ballots, and independents 200,000, while only 103,000 were sought by Republicans.

Voters in the state can continue to request the ballots up until October 27, though that may be too close to the November 3 election for them to receive the ballot and return it to their local elections office in time. 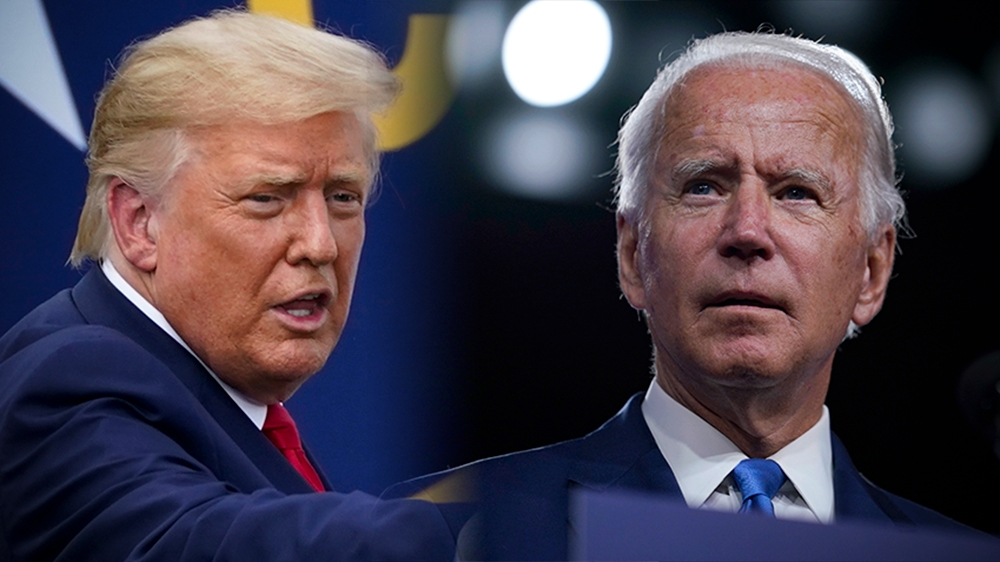 The Democratic lead in mail-in ballots is not only in North Carolina.

In Maine, 60 percent of requests for mail-in ballots were made by Democrats and 22 percent by independents – Democrats requested nearly triple the number of absentee ballots as Republicans.

In Florida, where the Republican party once dominated mail-in voting, 47.5 percent of requests came from Democrats and 32 percent from Republicans.

“These numbers are astronomical, and on top of that there’s these clear partisan differences,” said Michael McDonald, a political scientist at the University of Florida who tracks early voting.

The party split comes as President Donald Trump baselessly derided mail-in ballots as vulnerable to fraud, even though multiple studies have debunked the notion. The Centers for Disease Control and Prevention recommended the mail-in ballots as a safer alternative to in-person voting during the pandemic.

The numbers in North Carolina and elsewhere suggest Republicans are listening to Trump, shying away from mail-in ballots while Democrats rush to use them. 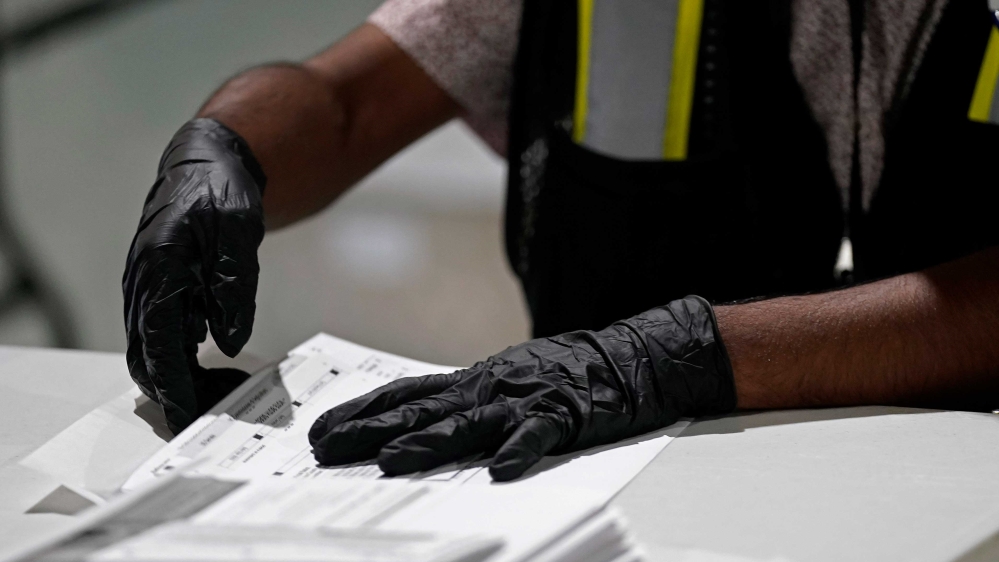 A worker prepares absentee ballots for mailing at the Wake County Board of Elections in Raleigh, North Carolina [Gerry Broome/AP]

The Democrats’ advantage in mail-in voting will not necessarily translate into an advantage in the election, however. Ballots cast on Election Day are expected to be mostly Republican.

“Even if the Democrats build up a huge lead in the early vote ballot, I still need to see the Election Day votes, because that’s going to be that red wave,” McDonald said.

But he has seen one hopeful indicator for his party – 16 percent of the mail-in ballot requests so far have been from voters who did not vote in 2016. They are younger than typical mail voters, as well.

“Seeing younger Democrats adapting to the technique is the first sign of a potential enthusiasm gap,” Bonier said, noting it will not be possible to know if the Republican party catches up until the election.

Campaigns usually want their voters to cast ballots by mail because they can “bank” those early votes and focus their scarce resources on getting their remaining supporters to the polls on Election Day.

Trump has complicated that effort among Republicans by repeatedly condemning mail-in voting, even though in the five states that routinely mail ballots to all voters there has been no large-scale fraud.

On Wednesday, while in North Carolina, the president suggested supporters vote once by mail and a second time in person to test whether the system could weed out voter fraud.

The next day, the executive director of North Carolina’s board of elections, Karen Brinson Bell, warned that voting twice in the state is a felony, as is trying to induce someone to vote twice.

One thought on “US: North Carolina kicks off mail-in voting as requests spike | USA News”