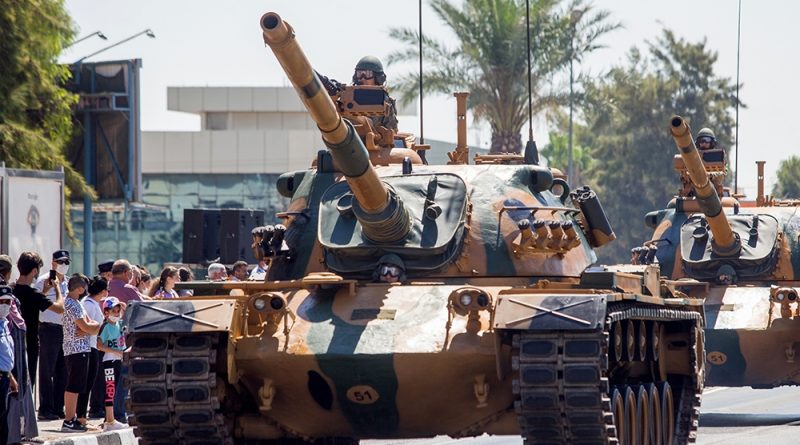 Turkey’s armed forces on Sunday began annual exercises in the breakaway Turkish Republic of Northern Cyprus – an entity recognised only by Ankara – as tensions continue to rise with Greece in the eastern Mediterranean.

Turkey’s hunt for gas and oil reserves in waters claimed by Greece has put a huge strain on the relationship between the two NATO members.

“The security priorities of our country and the TRNC [Turkish Republic of Northern Cyprus] are indispensable, along with diplomatic solutions in the eastern Mediterranean,” Oktay said.

Cyprus is divided between the Greek Cypriot-run south – an EU member state – and the Turkish Cypriot north.

Turkey has stationed tens of thousands of troops in the north of the island since its 1974 invasion, which followed a coup engineered by military rulers in Greece.

The Turkish leader “invited EU institutions and member states to be fair, impartial, and objective and to act responsibly on regional issues, particularly the eastern Mediterranean”, the president’s office said in a statement.

Michel said on Friday that European Union leaders will decide on a “carrot and stick” approach to Turkey when they meet on September 24-25, proposing a conference to defuse tensions.

Meanwhile, Erdogan met Libyan Prime Minister Fayez al-Sarraj in Istanbul on Sunday to hold talks on the tensions in the Mediterranean among other issues.

According to Turkey’s Directorate of Communications, the leaders discussed the steps to protect the rights of Turkey and Libya in the Eastern Mediterranean and terms to strengthen the cooperation in the region under a deal signed between the two sides.

In November 2019, Ankara and Tripoli signed an agreement covering their maritime boundaries in the Eastern Mediterranean.

Erdogan on Saturday raised the stakes by warning Greece: “They will either understand the language of politics and diplomacy, or on the field through bitter experiences.”

France said Turkey’s escalating conflict with Greece and Cyprus will be the main subject at this month’s European Council meeting, when sanctions will be considered against Ankara.

Foreign Minister Jean-Yves Le Drian said he and his counterparts in other EU countries had already discussed “the range of reprisals we could take with regards to Turkey”.

Turkey embarked on a military-backed hydrocarbon exploration venture in waters between Greece and Cyprus on August 10, ratcheting up tensions in a strategic corridor of the Eastern Mediterranean.

Greece responded with naval exercises to defend its maritime territory, which were later bolstered by the deployment of French frigates and fighter jets.

‘Up to the Turks’

The dispute between NATO members has underscored the rising geopolitical risks in the area as Turkey pursues more aggressively nationalist policies under Erdogan.

The European Union’s diplomatic chief Josep Borrell has also raised the possibility of sanctions against Ankara, but so far Paris has been unable to persuade other EU nations to join its hardline response.

Le Drian urged Erdogan to begin talks over its Eastern Mediterranean ambitions between now and the European Council meeting.

“It’s up to the Turks to show that this matter … can be discussed,” he told France Inter radio. “If so, we can create a virtuous circle for all the problems on the table.”

While he declined to specify the type of sanctions Ankara could face, he said there was an “entire series of measures”.

“We are not short of options – and he knows that,” said Le Drian referring to Erdogan.