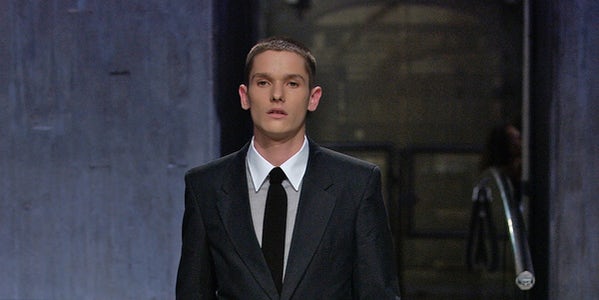 It’s an odd sensation, looking back on fashion shows that swept me up in a moment of strange exaltation. How do I communicate that emotion years after the fact? And how inappropriate does such an endeavour seem in a moment when the world is convulsing in a perfect storm of natural and human catastrophe? (I warn you: that challenge is only going to intensify with some of the shows I have in mind for upcoming weeks!) Cling to the exaltation, I say. Salute the spirit of creativity that seeks uplift in whatever darkness destiny throws at us.

And so, to Raf Simons, Spring 2005. His tenth anniversary collection, a waystation between what was and what would be. He called it “History of the World.” His invitation was a poster-sized edit of his friend Peter de Potter’s poem of the same name. So portentous in implication but so cryptic in execution, with the history of the world distilled into a contemporary grab-bag of cultural, humanist watersheds, most of them posed in opposition to patriarchal orthodoxy: Alan Turing and Rachel Carson and Richard Prince and Jonas Salk and so on. People, places, things who made a difference. Simons printed them on the collection’s sweatshirts. He could easily have added his own name to the list. After all, he’d already significantly changed menswear.

But this show sent him in a new direction. His previous presentations had taken place across a full spectrum of shadowy, funky venues, emblematic of his symbiotic melding of cult, style and music. “Youth as a monumental event,” Cathy Horyn presciently defined Raf’s soul in a profile she wrote for the New York Times. The monumentalism of Spring 2005 was maybe more literal. It was paraded in Le Géode, the glittering domed centrepiece of La Cité des Sciences et de l’Industrie in Paris, Europe’s largest science museum. The clothes were immaculately tailored to the environment, pared to a scientifically precise essence.

At its heart, Simons’ sensibility shares punk’s appetite for disruption and provocation. That translates into a reductive purity, with a sidebar of cerebral extravagance. Paradox! Which is why we are on our hind legs in anticipation of the Raf-Miuccialiaison at Prada to debut next week. Kindred spirits unite in a limitless space.

A similar contrary essence prevailed in Raf’s Spring 2005 show. Under that huge futuristic dome, he offered a glimpse of things to come. The movie “Gattaca” was very much in creative minds at the time. (I remember some sage calling it “the ‘2001’ of the 21st century.”) The lean silhouette of Simons’ collection, the luxurious collar-and-tie suiting, the monochrome palette of black, white and pale grey: it all echoed the convincing vision that director Andrew Niccol created of a world not too far in the future. But it was also an Olympic year (Athens, if you’re wondering) and Simons rendered his silhouettes even leaner with gymnastic stirrups and suspenders. It seemed doubly appropriate that this was the season he launched his sneakers, including the Velcro-strapped “Astronaut” high tops that now drive hypebeast collectors into paroxysms of lust.

What registered most with me was when the leanness exploded. Funnel-necked tops, triple-pleated pants in ice-toned leather (I’m jealous that someone else called those tones “glacial aerospace colours”) and a clutch of airy nylon coats. I haven’t mentioned that this entire show took place on the pair of giant escalators that would usually have carried Le Géode’s audience to a screening in the dome. While Raf’s models escalated slowly downwards, their coats gloriously expanded like angels’ wings. What was the soundtrack at this point? Vangelis? Orbital? Definitely something to carry you up, up and away.

I Googled the premises: “The auditorium is fitted with a 12-point sound system with four large subwoofers that deliver 21,000 watts in surround sound designed by Cabasse,” according to Wikipedia. In other words, the music would indeed have been utterly transportive. So much so that I remember the flight of angel wings lasting much longer than the photographic record suggests. Funny the way memory plays tricks. That’s why I’m enjoying writing about the fashion shows I have known and loved, with my patchy recollections elevating the provocations and gorgeousnesses of years past. But this one had a poignant spiritual heft — Angel Youth! Reflecting on that, I’m reminded of Raf’s own Eureka moment, an all-white Margiela presentation in Paris for Spring 1990. The first fashion show he’d ever seen, it so overwhelmed him with emotion that, then and there, he decided he wanted to be a designer himself.

There’s a theory that decades — and centuries — kick into gear four or so years in. The notion does actually work more often than not. Here, for instance. Raf Simons once again shifted menswear’s direction quite epochally. His next show, for Autumn/Winter 2005, picked up the traces with its elaboration on the expanded silhouettes of Spring. Significantly, he called this one “History of My World,” a shift in emphasis, which maybe mirrored his confidence as he took on the creative directorship of Jil Sander. But that’s a story for another time.

The images in this review are courtesy of INDIGITAL.tv | FashionAnthology.com.