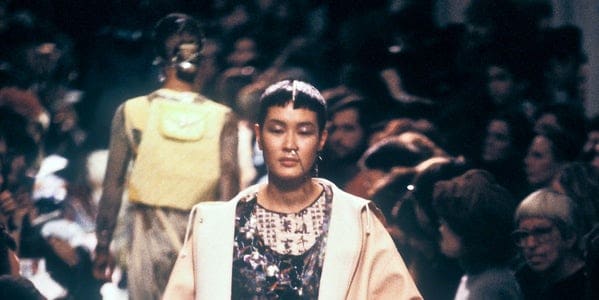 In the early 1990s, there was scarcely anything more exciting in fashion than a Jean Paul Gaultier show. Imagine a one-night-only performance by the world’s cult-iest rock star. The hysteria that swirled around a Gaultier presentation was equally febrile. It fuelled controversy too, like the one sparked by “Chic Rabbis,” JPG’s show for Autumn/Winter 1993, when he showed a rich but monochrome collection inspired by the garb of Orthodox Jews.

Typically for the designer, the following season couldn’t have been more of a polar opposite, though it was no less provocative. Spring 1994’s Les Tatouages reflected Gaultier’s fascination with tattoos, and with body art generally. He’d discovered the transgressive work of LA-based extreme performance artist Ron Athey, and he’d been going to tattoo conventions. He talked about seeing a beautiful older woman wearing a see-through blouse. Always an aficionado of undergarments, Gaultier was mesmerised by her bra, even more when he realised she had pierced nipples, and the bra was actually a tattoo. That confusion between skin and fabric was a leitmotif in Les Tatouages. But so was the fusion of a dozen other elements: Indian mysticism, 18th century silhouettes, 13th century martyrdom, haute couture, punk, fetish wear, denim and always, the body tattoo-ed, scarified, pushed on and on to the (un)limits of Gaultier’s imagination.

The diversity is even more resonant now, nearly 30 years later. Gaultier cast the definitive fashion faces of the era – Naomi Campbell, Christy Turlington, Kirsten Owen, Nadja Auermann, Yasmeen Ghauri, Tatjana Patitz – alongside the oddball individuals who were, or would become, Gaultier regulars, like the Almodovar favourite Rossy di Palma, the wry redhead Eugenie Vincent, the basketballing man mountain Vladimir McCrary and, most of all, poseur extraordinaire Tanel Bedrossiantz, who would go on to spend more than two decades as JPG’s male muse. They were interspersed with men and women the designer could have cast in Camden Market at the time. He always insisted his biggest design inspiration was the melting pot of the street, so the spectrum of race and gender, even age and body type on display here was instinctive, celebratory, respectful, but also very deliberate. Same with the visual references to other cultures and faiths. A seam of social comment ran through Gaultier’s work. He waged war against native French xenophobia. Celebrating the Other, rather than fearing it, was a cornerstone of his career. Even if he always seemed the most optimistic of designers, there was occasionally a sense that he was picking apart an imperfect world in the hope that he could put it back together in a better way. That was especially true of Les Tatouages with its intricate collage of time and place.

The show took place in Galerie Vivienne, one of the grand 19th century arcades that dot central Paris. It was also home to Gaultier’s flagship store. With the audience crammed down either side of the arcade, there wasn’t much room for the models to walk. The atmosphere was close and heady, amplified by incense and drifting, mystical music. Very un-disco. The face jewellery and piles of beads, the pierced lips, ears and noses and the actual inking complemented second-skin trompe l’oeil tattoo tops and draped sarongs. Odile Gilbert’s hairstyling and Stephane Marais’s makeup assisted in startling transformations. Stella Tennant, in one of her first appearances on a Paris catwalk, was almost unrecognisable.

I could only laugh when I read Bernadine Morris’s brutally brief precis of Gaultier’s show for the New York Times. “Part of his homage to punk fashion,” she wrote on October 12, 1993. “It wasn’t very uplifting, but some of the clothes were fun.” No wonder he began to feel the label of enfant terrible was more albatross than encomium. Les Tatouages featured almost a hundred looks in which Gaultier took his audience on a picaresque fashion adventure, from Camden crusties to medieval saints, from sensual to spiritual, but what came across loud and clear through all that exquisite variety was the discipline and the peerless craft Gaultier had acquired from his years working in the French fashion industry. He could drape Christy Turlington like Scheherazade (her headgear an artful composition of tin can tops!), but he could also tailor a mean frock coat or a pinstriped jacket, or update Christian Dior’s New Look in a full-skirted denim patchwork. For a while, there was buzz about Gaultier heading to the top job at Dior. He later claimed his stint as co-host of tv’s gamy Eurotrash doomed his candidacy, and John Galliano got the gig. His innate punkitude meant he couldn’t resist thumbing his nose at tradition. Men in skirts? You got it. Bare breasts and pierced nipples? No problem. Still, even with his iconoclastic bent, I saw no one else flying the fashion flag higher or more creatively for France than Jean Paul Gaultier.

How ironic it was that he was so good at creating iconic images. His most famous one, the secular deity Madonna in her cone bra (she would walk for him in his next show) had competition here from the finale of Les Tatouages, shimmering saints in heavenly crowns, followed by Eugenie and Tanel, each with one arm sheathed in armour, evoking Joan of Arc, the most iconic French saint of all. It was one last enthralling image from an utterly uplifting show. Yes, Bernadine, I did sayuplifting!

The images in this review are courtesy of INDIGITAL.tv / FashionAnthology.com.

Click here to read Tim Blanks’ series of the Top Fashion Shows of All Time.