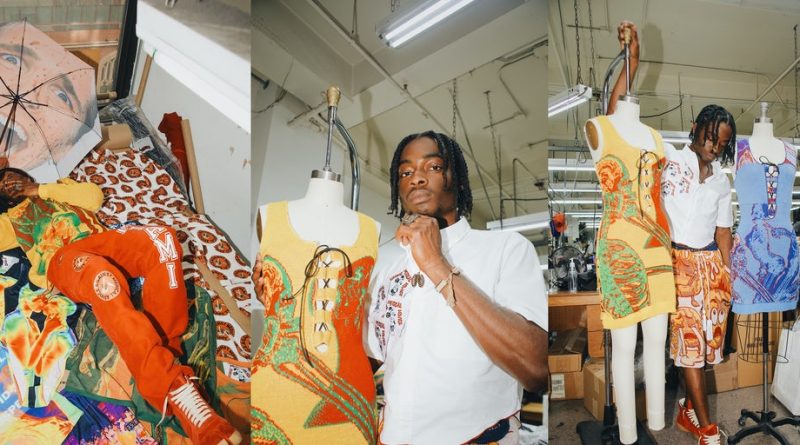 NEW YORK, United States — Like many other young creatives trying to make a career out of their artistic passions, Oluwole Olosunde keeps an unusual schedule, often up all night. But unlike those of his peers in fashion, Olosunde’s nights are filled by essential work.

The 23-year-old designer is an emergency department trauma nurse with a Bachelor of Science in Nursing and ambitions that go far beyond healthcare. Known as Wole to friends and as Guacawole online to his more than 15,000 followers, he set up an e-commerce business for his streetwear and home goods line, Against Medical Advice, last year and just linked with his first stockist, a new boutique on the Lower East Side in New York, Laams.

Not to be limited to one brand, Olosunde is also developing a ready-to-wear line called We Are the World that counts Skepta as a fan. The British rapper bought a bright green jacket made from Nigerian football flags last month, after Olosunde tagged him in an image of it on Instagram.

On a typical day, Olosunde might pack up e-commerce orders to ship in the afternoon before heading to work at the hospital at 7pm, starting a 12-hour shift. (His line of pillows, featuring x-rated X-ray images of humans, has been popular. The first order of 200 sold out in a week). The next morning, he might catch up on sleep before shipping out the orders or heading to his factory in the Garment District to work on his latest cut-and-sew collection pieces before starting another 12-hour shift at 7pm. By working longer shifts, and typically overnight, Olosunde has four days a week, as well as the daytime, open to work on growing his new fashion business. 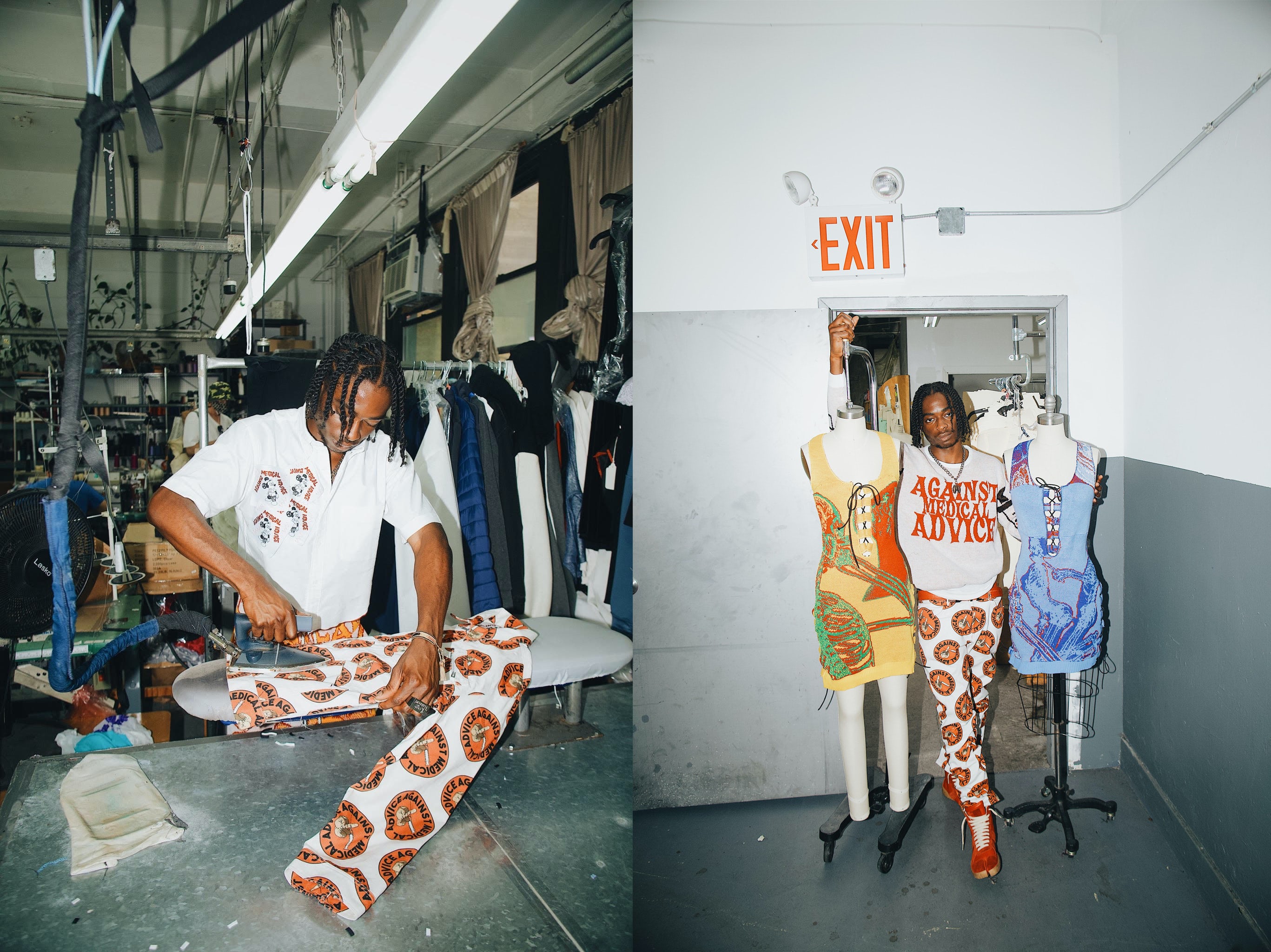 “Sometimes it does get overwhelming, of course, but it’s all a part of the life I know I’m building for myself,” Olosunde said. “I know I will get to the point where I want the art to take over.”

With all the talk about the end of New York fashion and the challenges for independent designers, Olosunde is a reminder that a new generation is finding its own way to push the industry forward. For this cohort, Hood by Air and Telfar are inspirations, and the idea of multiple revenue streams — and multi-hyphenated job descriptions — is not a compromise, but the goal.

What’s special about Olosunde is that even though he is still in the very early stages of his fashion career, he has the kind of vision and the charisma needed to push his ideas so far. And with the structure of his nursing job, which he describes as lucrative and flexible, he can give himself the time and space to create what he wants.

“This whole time I’ve been making, making, making — I have so much product on my Instagram,” Olosunde said. “I feel like a lot of the times I have these humongous ideas, and it may start from this one garment or this one piece. But in actuality, this one idea is an idea for an entire brand.”

While he grew up immersed in the medical profession— his mother was also a nurse — Olosunde’s love of fashion and style has always been a part of his identity. Growing up in Clinton Hill, Brooklyn, the son of Nigerian immigrants in a family of five children, he was inspired by the styles of the city’s many different demographics. When he was a young teenager, he attended a science and technology program for students interested in medicine at New York University and discovered SoHo shops like Supreme before it exploded to global popularity. With his first official paycheck at age 14, secured through the city employment programme Summer Youth, he bought a pair of Maison Margiela Sci-fi sneakers on Yoox.com.

He fell in love with Nigo and Pharrell’s designs for A Bathing Ape and Billionaire Boys Club, respectively, as well as Japanese designers like Junya Watanabe, Undercover and “survival wear” label Final Home, and New York labels like Hood by Air. Rihanna’s Fenty collections have also been a major inspiration.

But growing up, fashion was never presented as an option. “The idea of a stylist is not a realistic career in the Black community,” Olosunde said.

So when Olosunde had the opportunity to graduate high school early (he skipped two grades), he accelerated his medical career — and pleased his immigrant parents who encouraged him to get a degree. After getting his prerequisites at a community college in the city, he got his nursing degree at the University of Buffalo, graduating in 2018 at only 20 years old.

“I know I can do this fashion thing on my own, and now I’m just kind of like proving to myself even more, but there’s no way you can be a nurse without a degree,” he said. “I was like, ‘Alright, I’m going to give it a shot.’”

Nursing school was an important time for Olosunde outside the classroom, too. He befriended the owner of Ann Rhod’s tailoring, who welcomed him to her Buffalo shop after he hired her to create a hybrid pair of cargo camouflage pants and Levi’s jeans. “I did my clinicals, I did my work at school and got everything taken care of… and then [would] ride my bike after school to her,” he said. “She’s the one who really taught me about garment construction.”

It was during this time that he first conceived Against Medical Advice as a label with a higher purpose: educating the wearer about healthcare, “built out of the irony of being young and being rebellious, but still caring about your health and knowing you want to live long.”

But while he was in school, Olosunde was still just making pieces for himself to wear. He made his first items by hand: a sweater constructed from football scarves from different African nations inspired by his Nigerian background.

It wasn’t until 2019 that Olosunde, settled into his nursing career, realised he needed to escalate his fashion ambitions after a series of impactful life experiences, including a dangerous car accident in which he was a passenger. Even though he is confronted with death and injury in his work as a nurse, the threat of it in his personal life had a deeper impact.

“I [thought], I’m gonna apply myself to my work and to my art and to the vision that I have because I feel like things are never completely certain,” Olosunde said. “And that like really, really triggered me to full-fledge, push out my brand. And that’s when I made my website.”

He also renewed his passport last year after a decade and resolved to travel more, visiting Japan twice in four months, another inspiration for his fashion ambitions.

Then came the pandemic, which overloaded hospitals as infections spiked in the US in the spring, with more than 20,000 people dying in New York City alone, putting Olosunde’s double life to the ultimate test. 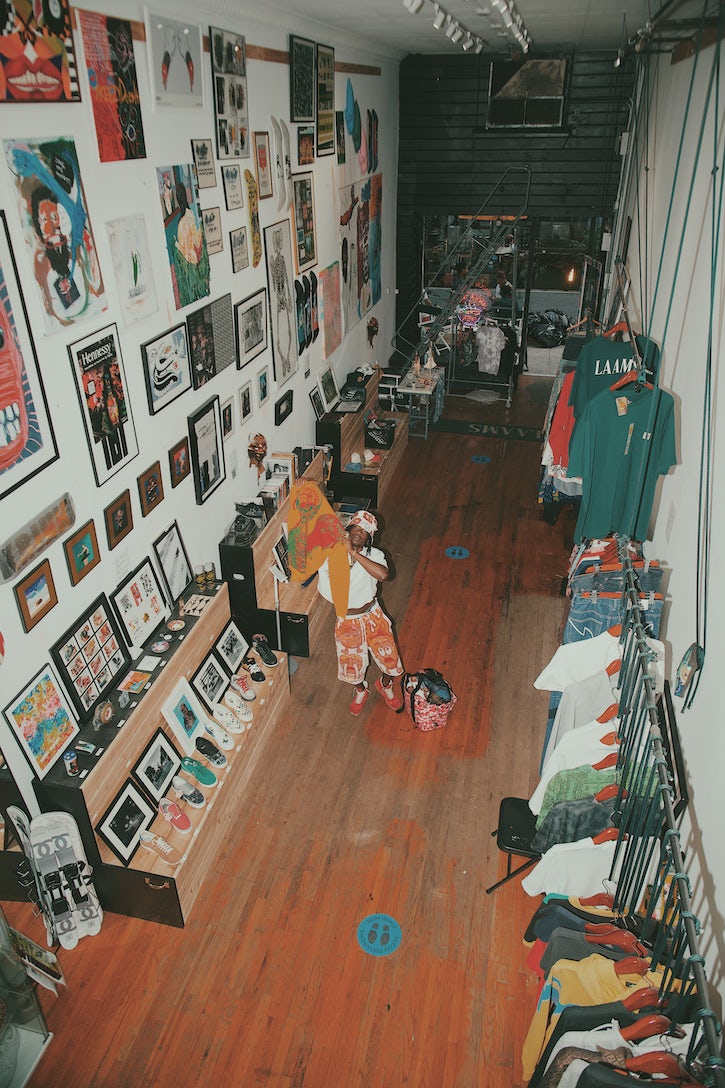 Wole Olosunde inside Laams, a new boutique on the Lower East Side in New York City | Source: Brandon Henry @Livinglegend__

“March, April, May were gridlock,” he said. “As a nurse, you [could] easily have 12 patients, and that’s not safe.” After New York City cases started to come down, he joined a travelling group of nurses that head to hospitals across the country in need of additional support. Psychologically, it’s been a difficult time, especially as he’s been alone for much of it. Design was a form of release, but his plans were stunted by not only his own busy schedule, but delays and lockdowns in the garment district where he manufactures his lines.

One piece he created during this time is what he is calling the “pandemic pack”: loose-fitting shorts imprinted with thermal images of humans and their temperatures. Another piece that is not yet ready for sale is a hooded sweatshirt printed with computerized tomography (CT) scan images of the brain.

“Stroke cases are some of my favourite work ups ‘cause it’s like trying to figure out a mystery,” Olosunde wrote on Instagram when he posted a sample of the hoodie. “Knowing what time symptoms of stroke started let’s you know the course of treatment you can take. And I love the rush of getting [the patient] from door to [the scan] in under 20 minutes.”

This is the kind of information Olosunde says he hopes Against Medical Advice becomes a vehicle to share, explaining that a shirt with an image of an X-ray can “build conversation” between people. “When people ask you about it, I feel like it gives you a chance to inform them about something they really may not know about, and that’s really what I want from my brand.”

“I want to be much bigger than fashion,” he said. “That’s why I keep reiterating that. I wanted to be a brand for the people, a brand for society.”

Scott Selvin, owner of the vintage, streetwear and collectables boutique Laams, said he reached out to Olosunde after discovering him on Instagram and asked him to bring some of his pieces to the shop. He said streetwear designers often develop interesting logos and graphics without any meaning behind them — Olosunde’s work was different. “It’s obviously visually eye-catching, but more so the story behind it,” he said, “and the way it translates to these allover prints and graphics.”

After their first meeting, Olosunde left three pieces from his collection for Laams to sell, which Selvin said quickly proved to be a smart decision. “We sold a button-down less than 10 minutes after he left,” he said.

The Biggest Challenges Facing New Brands and How to Tackle Them

Who Needs Investors? 7 Tips for Bootstrapping Your Fashion Business